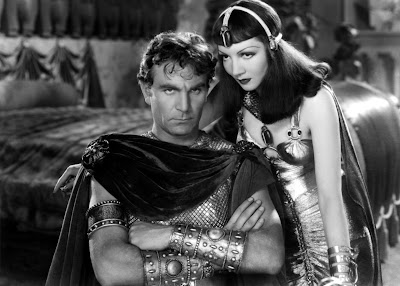 Who was Hollywood’s greatest Cleopatra? The role is almost always associated initially with Elizabeth Taylor thanks to the massive 1963 epic film. In some respects, the association of Taylor with the role has as much to do with the massive production and incredible amount of money spent as it does with the movie itself. The question I had for the 1934 version of Cleopatra is whether or not Claudette Colbert could do anything to make me forget Taylor playing the Queen of the Nile. I’ve always been a bigger fan of Taylor than Colbert for starters. Colbert was a good actress, but was often put in roles where she had to be all that is woman, something that I don’t think she was built for. And really, Cleopatra is that sort of a role.

Much like the later epic, Cleopatra in this earlier version is a combination of two of Shakespeare’s plays: Julius Caesar and Antony and Cleopatra. Where the later epic essentially does both plays in all of their glory (and thus runs somewhat over four hours), this version is highly truncated, giving us the meeting between Cleo and Caesar, the assassination of Caesar, and the romance between Antony and Cleopatra in a relatively spare 101 minutes.

It does this by skipping a lot of the classic scenes that you pretty much expect when it comes at least to Julius Caesar. So, for instance, there’s no scene where Antony comes not to praise Caesar but to bury him. It feels like a lot has been skipped through to keep the running time down. That’s certainly appreciated for the sake of my posterior, but also feels like a lot of the meat of the story gets passed over because of it. Caesar (Warren William) gets punked by his fellas in the Senate, and suddenly we’re weeks beyond it with reference simply being made to the speech that Marc Antony (Henry Wilcoxen) gave. But I’m getting ahead of myself here.

But really, I’m probably not. Chances are pretty good that you already know the basic story. But I’ll do this quickly. Cleopatra (Claudette Colbert) is fighting with her brother Ptolemy for control of Egypt. One of Ptolemy’s flunkies, Pothinos (Leonard Mudie) drags her and servant Apollodorus (Irving Pichel) to the desert and leaves them, essentially ceding control of Egypt to Ptolemy. But Cleo and Apollodorus make it back just as Caesar is about to sign a writ giving full control of the country to Ptolemy. Cleo entrances our boy Caesar, who decides to divorce his wife Calpurnia (Gertrude Michael) in favor of Cleopatra. This is what ends up getting Caesar knifed in the Senate and sends Cleopatra back home.

With Caesar out of the way, control of Rome falls to both Antony and his rival Octavian (Ian Keith). Antony intends to bring Cleopatra back to Rome with him, but like Caesar before him, he falls for her abundant charms and instead stays in Egypt. This naturally leads to him being branded as a traitor by the people of Rome, and Octavian goes to bring him back. Just to make things harder on Antony, all of his men and generals refuse to fight against Rome, leaving him with the Egyptian Army and whatever help he can get from Cleopatra.

I’ve always been indifferent to the particular charms of Claudette Colbert. As I mentioned above, I think a lot of that has to do with the fact that she was often put in films where she was supposed to represent a sort of pinnacle of womanhood. This was a lot easier for her in the earlier part of her career. When she was presented to the audience as completely irresistible in a film like The Palm Beach Story, it simply doesn’t work. And yet, for some reason, she manages to pull it off in Cleopatra. She’s clearly the best thing on the screen to the point where the rest of the cast could have pretty much been replaced or given different roles and it wouldn’t have mattered that much.

That’s my complaint in general, other than the fact that so much of the story feels ignored or glossed over. Despite all of Cecil B. DeMille’s characteristic opulence and the extravagance of the entire production, Cleopatra feels strangely small and ineffective. It’s a showcase for Colbert more than it is anything else, and it was a year when she had three films in which she starred nominated for Best Picture (Imitation of Life and winner It Happened One Night), making this a candidate for best year for an actor in history. The point, I guess, is that she didn’t really need this as a showcase—in fact, she was nominated (and won) for It Happened One Night and wasn’t nominated for Cleopatra.

This isn’t a bad film by any stretch of the imagination, and for someone not particularly interested in the whole sweeping story, this is a good version. But it’s also the Reader’s Digest version of the story, and it lacks the pomp and sweep of the later version.

Why to watch Cleopatra (1934): It’s opulent in a way that only a DeMille picture could be.
Why not to watch: It’s a pretty truncated version of the whole tale.