Film: Something’s Gotta Give
Format: DVD from NetFlix on laptop. 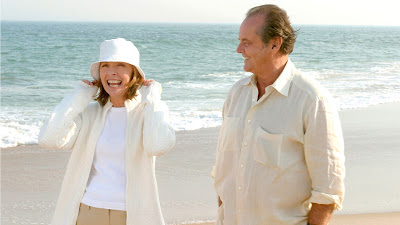 I knew less than 20 minutes in that I was going to absolutely hate Something’s Gotta Give, and I was right. The way this blog works is that I watch the whole thing even when I hate it. I sat through all of Vinyl and I watched Salo to the credits. It can’t be worse than those, right?

Okay, of course it’s not, but I’m serious that I knew right away that Something’s Gotta Give was going to suck and suck really hard. It’s a shame, too, because there are a few moments that are actually quite sweet, and it’s not often in my nature to dislike Diane Keaton. It’s frustrating because there could be a good story here, but it’s lost in so many things that it absolutely does wrong.

I’m not convinced that Something’s Gotta Give really deserves a lot of summation, but here goes. Harry Sanborn (Jack Nicholson) is an incredibly wealthy guy who has never been married and who only dates women under thirty. This is despite him being 63. Because of this, in the world of the movie, Harry is wildly successful in all ways. He owns something like ten companies including the world’s second-largest hip hop recording label. Harry is minted. His current girlfriend is Marin (Amanda Peet), who is less than half his age. Marin, incidentally, is an auctioneer for Christie’s. Does anyone in movies like this have a normal job, ever? Like why isn’t someone just an executive or something? What actually does matter is that Marin comes from money as well. Harry and Marin drive up to Marin’s mother’s beach house, a fucking mansion in the Hamptons for a weekend only to discover that Marin’s mother Erica (Diane Keaton) and her aunt Zoe (Frances McDormand) are also there.

Ha ha. It’s funny. And then Harry has a heart attack and is rushed to the hospital where he is saved by…Dr. Keanu Reeves. Okay, the character is named Julian Mercer, but it’s Dr. Keanu Reeves, and I find that hysterically funny. It makes me think of Mark Kermode’s frequent reference to Courage Under Fire where Meg Ryan plays a helicopter pilot. If you’re not familiar with that, consider it along the lines of Tara Reid playing an archaeologist in Alone in the Dark. And in a giant turn of events, it seems that young(er) Dr. Mercer is actually quite the fan of Erica and develops quite the crush on her. See…that’s funny, too!

I’m guessing you can see where this is going, right? Harry takes some time convalescing and, with no one else to watch out for him, ends up staying at Erica’s beach estate with her until he’s recovered enough to go home. Several important things happen. First, Erica is wooed by Dr. Keanu. Second, Marin tries to break up with Harry, but he breaks up with her first. Third, Harry and Erica start to find themselves attracted to each other and eventually consummate the relationship. And lemme tell you, there are few things in this world more painfully awkward than watching Jack Nicholson having sex with Diane Keaton.*

Anyway, the fact that Harry is sex-capable means that he’s well enough to go home, so despite the blossoming romance, he high-tails it back to New York. Both he and Erica have difficulties dealing with each other and other relationships now, a fact made worse by Erica being a successful playwright and using details from their relationship in her latest play.

I’m going to stop there, because that’s enough and it’s more than the film deserves. Let’s talk about the problems that are rife in Something’s Gotta Give. This is a movie that is clearly trying to be progressive in certain ways. It’s actually interesting that the relationship here turns out to be with Diane Keaton, since Hollywood typically loves to pair someone the age of Amanda Peet with someone the age of Jack Nicholson. In truth, even though I said I was going to talk about the problems, that’s something that the movie does right.

Just about everything else is wrong, though. First of all is the problem with the underlying premise of the story. All of these people are staggeringly wealthy, the sort of wealthy that none of us are. Both the Nicholson character and the Keaton character have more money than everyone reading this blog have combined. But their lives are incomplete and stupid and worthless because they haven’t found the right person to have sex with.

Worse is the movie’s attitude toward women in general. It’s great that we’re making Diane Keaton a sexually desirable, post-menopausal character, but the film then takes great pains to shoot this idea in the head. Early in the film, Erica’s sister goes on a rant about how the world loves Harry for being a playboy, but as an older woman, Erica is seen as worthless because she is no longer married and no longer sexually desirable. Great. It’s a great point. And what does the film do? It essentially makes her worthless as a woman until she becomes sexually attractive to Harry. All the ranting about how society treats older women like shit because unsexy, and the solution appears to be “but no…sexy” rather than “but no…fuck you and that ‘everybody needs to be sexy’ bullshit.”

That’s the problem. The film brings this whole issue with the way women are treated in film into view and then agrees with it by essentially telling us that this incredibly successful woman, someone who is called at one point the most successful female playwright since Lillian Hellman, is worthless until two men find her sexually attractive. I’m sorry, but that’s really fucked up.

And because of it, what apparently has to give here is me wanting anything more to do with this film.

I watched As Good as It Gets a few days ago. In that movie, at one point a woman asks Jack Nicholson’s author character, “How do you write women so well?” Nicholson answers, “I think of a man and I take away reason and accountability.” With Something’s Gotta Give, you start with Woody Allen and take away talent and humor.

*I have nothing against the sexuality of older people or older actors/actresses. Keaton was 57 when this film was made, and I’m less than a decade from that age now. But Keaton reminds me in certain ways of my mother, so the sex was creepy here. For me. It may not be for you, and it would have been much less so for me with someone like, say, Susan Sarandon, who is the same age.

Why to watch Something’s Gotta Give: Uh...
Why not to watch: In trying to tell us that older women get to have sex, too, it ends up being frighteningly misogynist.