Have a Conversation, Dammit! 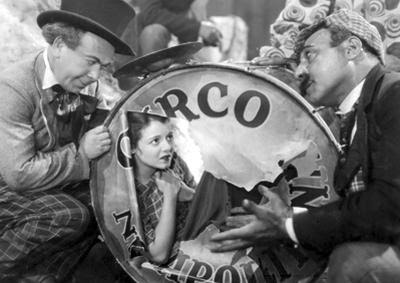 When the Oscars first started, there were some different rules covering aspects of the ceremony. Janet Gaynor was one of the beneficiaries of those different rules. The first set of Best Actress nominees listed five performances; three of them were Janet Gaynor’s, essentially guaranteeing that she would win. She did, of course. One of those three performances for which she won was Street Angel, a straight-up melodrama concerning a good girl forced into bad decisions by circumstance. Yes, it’s drippy as hell, and of Gaynor’s three nominated performances (the others being Seventh Heaven and Sunrise: A Song of Two Humans), it’s clearly the one in service of the weakest story.

Like most melodramas, Street Angel is an essentially simple story. Young Angela (Gaynor) is poor and living in Naples with her sick mother. Desperate for her mother to get treatment, Angela decides that her only recourse is to obtain the money for her mother’s treatment illegally. This starts with a rather sad attempt at prostitution and when that fails, an attempt to simply steal the necessary money.

Angela is naturally caught in this and is sentenced to a year in the workhouse to pay for her crimes. She escapes, though, and makes her way back home, only to discover that her mother has died. Still desperate to escape from the police, Angela throws herself on the mercy of a travelling carnival and leaves the city under their protection. When it is discovered that Angela has a natural skill of balance and a shapely pair of legs, she becomes the new attraction for the carnival, and also attracts the attention of Gino (Charles Farrell), an artist.

Naturally, love blooms. When an accident temporarily cripples Angela, she and Gino leave the carnival and return to Naples, the one place where she is wanted. Gino attempts to make it as an artist and is forced to sell the painting he has made of Angela so the two can continue to eat. Because this is a melodrama, we’re going to get great news and terrible news at the same moment. Gino is commissioned to paint a mural, meaning the two are suddenly in the black. Simultaneously, Angela is recognized and still needs to pay her debt to society. And, of course, Gino believes that Angela is pure and knows nothing of her past, and of course will know nothing of how badly she failed at being a criminal.

The obvious problem with Street Angel is that all of the problems that Gino and Angela suffer through could have been solved if the two had simply gone to a different city. If they’d decided to head to Rome or Venice or Florence, Gino could have just as easily been capable of finding work for himself and Angela wouldn’t have been in danger of being collared by the police and sent to the workhouse. This is melodramatic movie logic, unfortunately, and it seems like the characters themselves never seem to think of going 50 miles or so to the southeast and setting up shop in Salerno.

I have no doubt that the melodrama played in 1928. One of the main ways that melodrama works is that we, the audience, know far more than the characters we are watching. We know that Angela actually is pure of heart despite her actions because we know what motivated them. A word or two from her to Gino would explain the entire situation, which would short-circuit the plot, which is precisely why this doesn’t really happen in the film. When Angela is arrested and begs for an hour with Gino before being taken in, she doesn’t use that hour to explain to Gino what has happened, so from his perspective, she simply vanishes. This is an easily solved problem, and since it isn’t solved, we get a third act. That’s a problem—this isn’t specifically character-driven but forced by plot necessity.

Janet Gaynor was an appealing actress, and she pairs well with Charles Farrell. In fact, the two made a number of films together, including Seventh Heaven, for which Gaynor was also nominated. She plays the role well, but she’s not really asked to do a great deal beyond simply being waifish. As I said at the top, this is clearly the least of Gaynor’s nominated performances. This is mainly because there’s no real necessity for her to do much. She has to be pretty and tragic. That’s easy for someone who was a successful actress in silent melodrama.

This is a completist-only film. You can get better efforts from Gaynor in Seventh Heaven and especially Sunrise. If you’re interested in seeing everything nominated, go for it. If you want to merely see performances that were worth watching, go for her other work from this era.

Why to watch Street Angel: It capped off a great year for Janet Gaynor.
Why not to watch: Like most silent drama, it’s thick with melodrama.

Posted by SJHoneywell at 1:16 PM