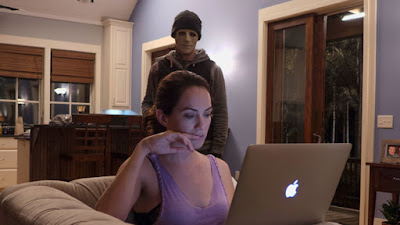 When I look at a movie like Hush, there are a few ways I can take it. This is a straightforward slasher/thriller with an interesting twist in that the main character is deaf. On the other hand, this isn’t too different from Wait Until Dark aside from the idea that we’re dealing with someone deaf and not blind. Aside from the deafness, this is really a standard stalker/thriller in a lot of respects. Isolated woman, psychotic bad guy…you know the drill.

That said, this was a film I’d been intending to watch for some time. The last few years have been pretty good for horror, and Hush got pretty good press and decent acclaim from other bloggers. Tonight just seemed like the right time to get to it, since I was relegated to the basement this evening without a working DVD player.

There’s not a great deal to go over in terms of plot. Maddie (Kate Siegel) is an author who has moved to a remote house to work on her next book. She has been deaf since about the age of 13, but has been more than able to take care of herself, despite not being able to cook very well. Her neighbor Sarah (Samantha Sloyan) shows up to return Maddie’s book. The two have a short conversation, and then Maddie goes back to work.

That evening, while Maddie cleans up the dinner that burned while she was talking to Sarah, Sarah shows back up. This time, though, it’s not a friendly conversation. Sarah pounds on Maddie’s window, but since Maddie can’t hear and isn’t paying attention, she doesn’t notice. Moments later, a masked man (John Gallagher Jr.) arrives behind her and stabs her repeatedly, then notices Maddie and soon discovers that she can’t hear him.

What follows is a cat-and-mouse game as the unnamed killer starts to toy with Maddie, slowly revealing his presence to her. Maddie, naturally, has to discover a way to start fighting back. Her advantage is that she knows the terrain. His advantages are that he can hear her and that he has her trapped in the house.

Honestly, there’s not a great deal more to say in terms of the plot of Hush. At one point, Sarah’s boyfriend John (Michael Trucco) arrives looking for Sarah, and there are a few minutes of back and forth between him and the killer. It’s a nice little change from the norm. and adds a good bit of tension.

Hush is nicely paced, and for a simple, high-concept thriller, and manages to do all of this in an incredibly spare running time. The whole thing clocks in at 81 minutes including the closing credits. It works pretty well at that length and at that pace. Any shorter and it wouldn’t be much of a movie, and any longer, and it would risk being padded unnecessarily.

The performances are solid overall as well. John Gallagher Jr. makes a very effective killer, managing to be extremely creepy and effective throughout. One of the nicest moments comes early on, when Maddie has just become aware of him. She writes in lipstick on a window that she hasn’t seen his face and will not tell anyone. The killer then slowly removes his mask, asks if she can read lips, and tells her that she’s seen his face now.

There’s not much more to say. Hush is a standard stalker/slasher/thriller film with an isolated potential victim being tracked by a psychotic who has no motive other than that he is a psychotic. Maddie’s deafness is used to good effect throughout, and it helps that she’s a smart character and thinks through things carefully before acting. Remove her deafness, though, and there’s not anything here that you haven’t seen before.

I compared this with Wait Until Dark at the top, and I did that for a reason. This is almost a remake in certain ways. In fact, while Maddie doesn’t specifically use her deafness as an advantage, she does use several of her items that are used to compensate for her lack of hearing to good effect.

Hush is good. It’s worth seeing if you like the genre. It’s not the instant classic I was expecting, but it’s a good thriller and maintains a solid sense of tension all the way through. It’s worth seeing, but if you don’t like films like this, you won’t find much here to engage you.

Why to watch Hush: A good high-concept thriller.
Why not to watch: If you’ve seen Wait Until Dark, you’ve pretty much seen this.