Singin' in the Pain

Film: With a Song in My Heart
Format: DVD from Mokena Community Public Library through interlibrary loan on rockin’ flatscreen. 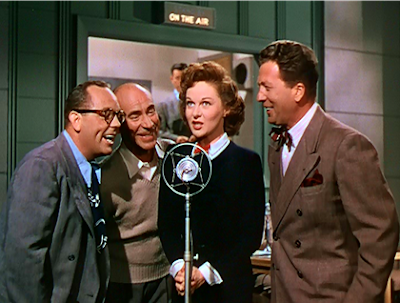 Unlike when I watched Goodbye, Mr. Chips a few days ago, I knew going into With a Song in My Heart that there would be a great deal of singing. This is, after all, the story of singer Jane Froman. Like many a film of this sort, we start at the end, with Jane being given an award for her tremendous courage. Courage? For a singer? Well, for that we’ll need to dive into the movie itself, won’t we?

Jane Froman (Susan Hayward) starts out life as a young woman studying singing and looking for a job on the radio. She manages to get an audition, but when she goes in, she encounters not the man she expected but Don Ross (David Wayne), who doesn’t tell her that he’s just failed an audition. She sings, the real manager for the station hears her and he hires her on the spot. Jane is a real talent (the singing in the film is voiced by the real Jane Froman, after all) and is soon skyrocketed into a real career. Don becomes her manager and lives on her coattails, working as a smaller warm-up act in many of her shows and managing her professional life. Eventually, the two decide to get married despite the fact that Jane doesn’t really love him. It’s more a marriage of convenience for her career than anything else.

World War II breaks out, and Jane is suddenly a highly sought-after act to entertain the troops. She’s eventually called to Europe to entertain the wounded, but her plane goes down near Lisbon, not from enemy fire but an evident malfunction of the mechanical or pilot variety. Jane is one of only 15 people to survive the crash. It’s here that we meet the two other important people in this tale. The first is Clancy (Thelma Ritter), an American nurse working in Europe who becomes Jane’s personal nurse eventually. Second is John Burn (Rory Calhoun), who was a steward on the flight and who was also severely injured, who falls in love with Jane. Since Jane isn’t really in love with her husband, that love soon becomes requited, causing a problem in the marriage she has.

Jane’s injuries are significant. Her right leg is shattered and nearly severed below the knee and her left ankle is crushed as well. For a long time, it’s not know if she’ll need to have her leg amputated. The real question, of course, is whether or not she’ll still be able to perform, and whether or not she’ll be accepted on stage as someone who can no longer walk without crutches. Of course audiences do still love her, and shows are arranged for her so that she doesn’t have to move when performing. The film actually ends a good 10 or 15 minutes before the final credits roll since we’re going to end with a big pro-America feel-good song with Jane standing, sans crutches but still not able to walk, belting out patriotic songs to the American wounded. Yes, I spoiled the ending. If you didn’t see this ending coming, it’s your own fault.

The good here comes in two flavors. Those flavors are the two nominated performances of Susan Hayward and Thelma Ritter. Hayward is stellar as Jane Froman, playing the role with real heart and real humanity. Hayward makes Froman easy to like and easy to root for through the whole film. Froman comes across as a real person who has a tremendous talent, but is actually a decent person. Thelma Ritter more or less plays Thelma Ritter. She’s no-nonsense and funny, which is hardly a stretch for her. I’m always happy to see Thelma Ritter, but really, she’s someone who earned a great deal of acclaim for fitting a particular fun stereotype of character. She’s good here, but this is a pretty standard Thelma Ritter performance.

The rest of With a Song in My Heart is standard stuff and barely worth mentioning. It’s not terrible, but it’s also not that interesting or all that new. If you’ve seen a biopic of this sort at any point in your life—good or bad—you’ve pretty much seen everything that doesn’t involve Susan Hayward in this. There are troubles that she needs to overcome. Her love life is troubled. Both David Wayne and Rory Calhoun are serviceable, but could have just as easily been replaced by pretty much any other actor of the era and no one would notice.

This is a short review for me, but there’s really nothing else to say. With a Song in My Heart runs just under two hours. It’s about an hour of plot and about an hour of music. Strange to say, but the music (and Susan Hayward) is the best part of it, and yes, that feels strange to say.

Why to watch With a Song in My Heart: Susan Hayward nails this.
Why not to watch: It’s an otherwise standard biopic.

Email ThisBlogThis!Share to TwitterShare to FacebookShare to Pinterest
Labels: Best Actress, drama, musical, Walter Lang, With a Song in My Heart