Film: A History of Violence
Format: DVD from personal collection on rockin’ flatscreen. 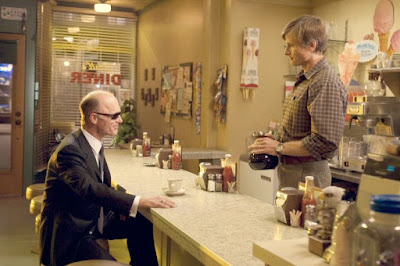 I don’t remember how I got my copy of A History of Violence. It was probably from a closing Blockbuster or something similar, though, which means I bought it for cheap because I didn’t own it and heard it was worth seeing. I’m also not sure why I’ve never gotten around to it before now. I think it’s because I often don’t look to my collection for this blog because I know I can watch those whenever I want, and I don’t know that I’ll always have access to other films. But I like David Cronenberg as a director and I like a lot of the cast, so I went into this with high hopes.

Tom Stall (Viggo Mortensen) is an average husband and father living in small town Indiana. Tom runs a local diner and helps his wife Edie (Maria Bello) take care of their kids Jack (Ashton Holmes) and young Sarah (Heidi Hayes). Life seems pretty normal for them, despite Jack having a bully problem in high school. The family is generally happy and things are fine. That is until one day a couple of strangers walk into the diner. These men, Leland (Stephen McHattie) and Billy (Greg Bryk) intend to rob the diner, and based on the short scene at the start of the film, kill everyone inside. Little do they know that Tom Stall has some skills. He smashes one in the face with a coffee pot, comes up with the gun and shoots them both down despite being stabbed through the foot at one point.

Tom’s heroics make him a local celebrity and the nature of the attack and his response gets him a little national press as well. It’s not long after this that Tom Stall is visited by a group of mobsters from Philadelphia. Led by a one-eyed, scarred man named Carl Fogarty (Ed Harris), the men seem to want Tom to go with them to Philly. They also call him Joey Cusack and attempt to remind him that he once ran with a crew in Philadelphia and was a notorious killer. Tom naturally denies this, but those denials become harder and harder to believe when another incident of violence occurs between Tom/Joey and the men from Philly.

All of this is happening because Tom Stall really is Joey Cusack, and Joey’s brother Richie (William Hurt, nominated for Best Supporting Actor for a role that runs one scene and about 10 minutes), who is still mobbed up, wants revenge for his brother’s actions. This means that the only way to end things is for Tom/Joey to confront his brother and have things out, which means going back to Philadelphia and seeing just what damage was created by Joey before he ditched the life and, as he says, spent three years killing off Joey to become Tom.

In truth, A History of Violence is a pretty standard mob/revenge tale. A guy who was a mad dog killer and who created a lot of enemies for himself has left the life and created a new persona for himself. His past comes back to haunt him because of a random, unpredictable event, and this creates havoc in his life until he gets to the point where his past needs to be dealt with finally. What makes the film interesting is the focus.

A lot of A History of Violence is naturally focused on the mob stuff, and for a movie that runs a touch over 90 minutes, there is a sizable body count, some of which end up with the sort of body trauma that we expect from David Cronenberg’s past history. This is a violent movie in many respects because it kind of has to be. While much of the action necessarily centers on this, the actual focus of the film, the heart of the story, if you will, is about Tom Stall and his family. It’s really about his family’s reaction to his past life. Jack Stall is in high school, meaning that he’s at minimum 14 and there is every indication that he’s pretty close to graduation. This means that Joey Cusack became Tom Stall decades in the past, and he’s hidden this secret from his family for their entire lives. How do you react when you discover that your husband or your father has a dark past and was once someone who admittedly killed for pleasure?

This means that when we’re not dealing with Tom/Joey attempting to clear his past or the sudden moments of intense violence, we’re dealing with a unique domestic drama, and the film handles it well. Maria Bello and Ashton Holmes have to handle the bulk of this, and they do so in opposite and believable ways. Holmes’s Jack lashes out with anger while Bello’s Edie reacts with a complex web of emotions including anger, fear, and disgust. Both of them handle it well, and Bello in particular is believable. Much of the film hinges on Viggo Mortensen’s performance as someone who has had this terrible secret revealed and is still trying to make sense of the life he has created.

My only real issue with A History of Violence is the premise. I buy into a lot of this, but find it stretches the imagination a bit that Joey Cusack could disappear this effectively for this long. Oh, I know Witness Protection is a thing, but Joey evidently did this on his own. It’s on the edge of possibility, I suppose, but that’s where I found myself needing to suspend disbelief.

Why to watch A History of Violence: Stark and spare, with nothing it doesn’t need.
Why not to watch: The premise does stretch the imagination at times.