Wednesday Horror: Day of the Dead

Film: Day of the Dead
Format: DVD from personal collection on laptop. 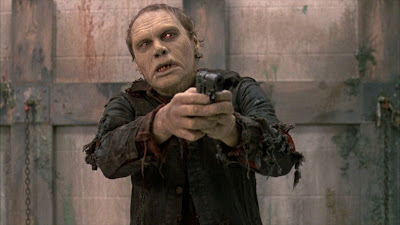 I’m put into a strange situation with Day of the Dead. When the third installment of George Romero’s zombie series came out, it was very poorly received in general. Those critics who don’t typically like horror films didn’t like it because it’s a horror film. Horror fans didn’t like it very much either because it’s a huge step backward in terms of gore. Dawn of the Dead was incredibly bloody while Day of the Dead is much lesser on the general gore scale.

In the years after its release, Day of the Dead has been re-evaluated a number of times and has slowly risen in the estimation of horror fans. Once over the disappointment of a huge curtailment in the gore factor, viewers started to look at what was really here and saw the story beneath the lack of gore and saw the commentary that Romero was making. Over and over Day of the Dead was brought up as a movie that was severely underrated (Halloween III is the other one that is frequently mentioned). Now it’s to the point that Day of the Dead may actually be overrated. It’s good, but it’s definitely the weakest of Romero’s original trilogy.

In keeping with the first two films in the series, we have a completely new set of characters living in essentially the same world. Night of the Living Dead gives us the start of the zombie plague; Dawn of the Dead shows us the progression as more and more of the world succumbs to the undead. With Day of the Dead, we’re reduced to an incredibly small population of 12 in a military compound somewhere in the Everglades. This population is unevenly split between the thick-headed and short-sighted military, led by Rhodes (Joseph Pilato) and the scientists and support staff, led by Sarah (Lori Cardille).

Also thrown into this mess are the helicopter pilot John (Terry Alexander) and radioman McDermott (Jarlath Conroy). Not soldiers, they are safe by virtue of being necessary if there is any hope of the soldiers escaping and contacting anyone else who might still be alive.

Can you guess that things are going to devolve quickly? Of course you can. One of the things that Romero’s zombie movies have in common is that the zombies tend to be the cause of death for people, but it’s the other people who serve as the main threat. That’s definitely the case here. We’ve got more or less a nuclear standoff with the zombies standing in as the nuclear weapons. We know they’re going to get into the compound or get loose or something. The only real question is when and how.

There are things that Romero does really well in virtually all of his movies. One thing is that he casts people who look like people. This is not a collection of runway models and superstars slumming in a zombie movie. Lori Cardille’s Sarah, the only woman in the film, is serviceably attractive, but hardly someone who you’d look at twice in the context of a movie beauty. None of the men have movie star looks either. This works; it makes the events much more real and believable that the people we’re looking at look completely normal.

The other thing he does well is evolve his world. In Night of the Living Dead, the zombies are a horde. In Dawn of the Dead, we start to see evidence that they might have memory. In the fourth installment, Land of the Dead, many of the zombies are attempting to reclaim something like a semblance of their former lives and are starting to use tools. In Day of the Dead, we get the bridge between Dawn and Land. That bridge is Bub (Sherman Howard), a zombie who is slowly being trained into docility by Dr. Logan. Bub remembers tools, is capable of aiming a gun and of saluting, demonstrating the slow evolution of Romero’s creation. It’s the sort of thing that makes sense in retrospect even if it didn’t make sense in the context of the movie at the time.

Where Romero fails is in his characters and storytelling. The biggest issue with Day of the Dead is that it’s completely ham-fisted. Our characters are lumped immediately into a couple of groups. We have bad guys who we are pretty sure are going to be lunch by the end of the final reel. We have good guys who we figure are probably going to make it. We have a couple of good guys who we’re pretty sure are going to be offed by the bad guys. And then we have cannon fodder, people who have a line or two but really exist so that the zombies have more people to kill. My guess is that if you watch the first 20 minutes of this for the first time, you’ll accurately predict the fates of at least 10 of the 12 human characters. I got 11. Admittedly, this wasn’t my first watch, but it was the first watch in a good 30 years.

I can forgive the obvious allegories, though. Romero is actually pretty fearless with the movies he wants to make and I love that he makes the movies he wants. Day of the Dead won’t replace the first two in the original trilogy for me, but it is better than its initial reputation even if it’s not really as good as its refurbished status would have you think.

Why to watch Day of the Dead: It’s more cerebral than most of Romero’s zombie films.
Why not to watch: It’s almost melodramatically allegorical.

Posted by SJHoneywell at 5:31 PM

Email ThisBlogThis!Share to TwitterShare to FacebookShare to Pinterest
Labels: Day of the Dead, George Romero, horror