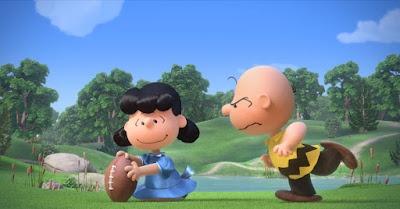 One of the classes I teach focuses on movies. Actually, movies aren’t the real focus of the class, but the vehicle for students to use to study communication. Home is one that has been frequently picked, although I’m still not sure what it’s about. I’ve also heard a great deal of praise for The Peanuts Movie, and am a little surprised at its lack of nomination. Truth be told, though, I’ve really only seen the five nominations, so I can’t comment on anything that might genuinely be missing. This goes for the second Spongebob movie and The Good Dinosaur as well.

5. It pains me to put Anomalisa in last here for a few reasons. I like the fact that the Academy is looking at animated movies that aren’t specifically for children and that’s a trend I’d love to see continue. But I found this movie really unpleasant all the way through. The voice acting is good and the animation is interesting, but I didn’t like the film much beyond its interesting accomplishments. So, kudos for the nomination and expanding the horizon of the category. Just pick a better animated film next time. I have a feeling this will be an unpopular placement.

4. For those who have seen all of these movies, my guess is that most will put the strange Boy and the World in the bottom spot or not nominated at all. There’s a strange beauty to this film, though, and I found the visuals, while strange, very appealing. There’s an atmosphere that hangs over this film, a dream-like quality that I found very interesting, creating a unique film experience. I don’t know that I’d watch it again any time soon, but I liked what it was.

3. Putting winner Inside Out in third is going to be unpopular, since I have a feeling that this is the consensus winner. I think it’s a good movie, and I think it’s the kind of movie that will actually be beneficial in helping kids cope with their emotions. But I didn’t love it. I like it, but I genuinely liked the other nominees from this year more than I did Inside Out. Yes, you’re probably all going to disagree with me. I can live with that. Go ahead, let Anger drive for you in the comments below.

2. Shaun the Sheep is oddly experimental in a lot of ways, something that more than half of the nominees share. It’s simple and sweet, though, and while there may not be a great deal of plot or anything earth-shattering in terms of an ultimate message (“Be happy with your life” seems to be it), I had a lot of fun watching it. It’s really funny in places, and I love that it’s very clever in paying homage to a number of classic films and to the silent era as a whole. It’s good filmmaking that all of this works in a movie that even young children can follow.

1. The real winner here is When Marnie Was There even if there was no way it was going to upset the Inside Out juggernaut. I like that this movie tackles real issues, and while younger kids may not have a lot to pull out of it, young teens and pre-teens will find a great deal that is relatable to their lives. Studio Ghibli does beautiful work, and one thing they do better than almost everyone is create worlds that feel real and have their own internal logic and consistency. This is among their best, and it’s where my vote would have ultimately gone.

Posted by SJHoneywell at 1:18 PM

Email ThisBlogThis!Share to TwitterShare to FacebookShare to Pinterest
Labels: 2015, Anomalisa, Best Animated Feature, Boy and the World, Inside Out, Oscar Got It Wrong, Shaun the Sheep Movie, When Marnie Was There