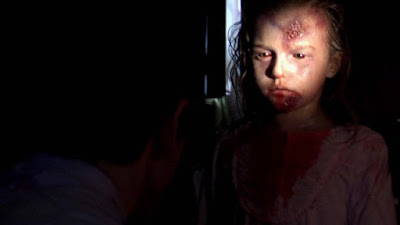 Found footage is a hard sell for me. While I think it’s possible to tell a good story in the found footage style, I think a lot of times the style gets in the way of the story being told. With [•REC] (or [REC], [Rec] or simply REC) we have film that is doubly controversial. It’s found footage, something that doesn’t always work. It’s also a film that hits that zombie/non-zombie dividing line. Are we looking at a zombie apocalypse or is this a 28 Days Later-style infection?

Regardless, it’s not difficult to see where [•REC] takes its inspiration: zombie movies and zombie-inspired movies like the aforementioned 28 Days Later. It’s also clearly inspired by the sort of television magazine show that feature a reporter and camera operator going on location for local interest stories. That’s the case here, with our television presenter Angela Vidal (real-life television presenter Manuela Velasco) and her cameraman Pablo (Pablo Rosso) going on location to a local firehouse to see what a typical night is like for the firefighters.

After a couple of minutes of them walking around the fire department, a call comes in. Angela and Pablo head off with Manu (Ferran Terraza) and Alex (David Vert) to a call about a woman (Martha Carbonell) who is evidently trapped in her apartment and screaming. They go to investigate along with a couple of police officers (Jorge-Yaman Serrano and Vicente Gil) only to find that the woman is covered in blood and evidently crazy. She attacks one of the cops and bites him seriously on the neck. When they try to get him out for medical attention, they discover that the entire building has been locked down from the outside with no explanation of why.

As the film progresses and the carnage starts to increase, we learn a few things. A young girl named Jennifer (Claudia Silva) is sick with what her mother (Maria Lanau) claims is tonsillitis. We also learn that Jennifer’s dog Max is sick and has been taken to a local vet. When a health inspector (Ben Temple) is let into the building, he investigates the people who have been bitten and those who are still uninfected. When several seriously injured people start showing signs of serious aggression he is eventually forced to reveal what is happening. The dog showed signs of a new, unknown disease that spreads through saliva. As is evident, this disease is transferrable to humans as well. And with that announcement, all hell breaks loose.

[•REC] does a lot of things right. First, like the best of found footage films, it doesn’t overstay its welcome. Even with the closing credits, the film clocks in at under 80 minutes. For those prone to motion sickness (your reviewer slowly raises his hand), this is a good thing, because there’s a great deal of swinging shaky-cam footage here. Thankfully, it’s not constant, and there are long stretches where the camera is essentially stable. We’ll get to the shaky-cam issue soon enough.

Another plus is the people tapped to be in the film. No one here looks like a movie star with the exception of our main character Angela. Even she isn’t movie star beautiful. She looks very much like what she is and the part she is playing: a woman who does fun local stories for a local television show. It’s a great piece of casting, something that is generally true throughout the film. These look like regular people, and that does a great deal to heighten the reality of the situation that they are facing.

It also manages to offer some unique and interesting ideas on the zombie/pseudo-zombie idea. Near the end of the film, we get a few hints as to what might actually be happening here, and it’s a different idea from many films along this line. [•REC] in that respect shows itself to be carefully considered and smarter than it has a right to be for a film that is really intending to be a visceral horrorshow.

And it is that. There’s a lot of blood here, but not a massive amount of violence. Most of the dealing with the infected happens just off camera. We know what is happening, but we don’t actually see a lot of it. Again, that’s good filmmaking, although it may simply be the case there that what we see and don’t see comes from the wildly swinging camera.

So let’s deal with that shaky-cam footage. I don’t really mind some shaky-cam in some movies when it makes sense or is done well. The problem with found footage films like this one is that we don’t specifically get “shaky-cam” as it is normally used. Instead, we get a camera that sometimes focuses on something but is frequently swinging around wildly. It get that this can increase the sense of danger and the reality of the situation in question. That’s all to the good. But from a cinematic perspective, it also means that there are a lot of things that we don’t see and a lot of the story that simply doesn’t happen because the camera isn’t pointed in the right place or moves through what is happening too quickly.

On a more personal level, it affects my stomach when the camera moves like this. I can take it for a few minutes, but as the film draws to its conclusion and we are running almost constantly, I start to become nauseated by the camera work. It absolutely affects the film in that I find it difficult to watch in a single sitting. I need to take breaks from it, and that dampens the visceral nature of what is happening in essentially real time.

For all that, though, [•REC] is about as well-made a found footage movie as you’re likely to find. It’s scary and visceral. Really, what more do you want?

Why to watch [•REC]: It’s visceral as all hell.
Why not to watch: Found footage shaky cam.