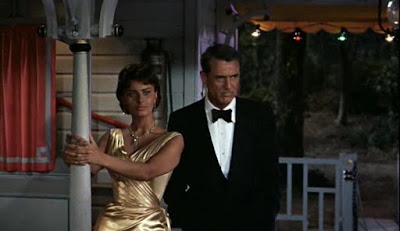 I went into Houseboat with high hopes. I knew it was a goofy little rom-com, but it stars Cary Grant and Sophia Loren, so I had real hopes for it. In fact, I knew nothing more about it than it had Grant and Loren in it, and thus was almost certainly going to involve a romance. Grant did a few movies like Charade that were less comedic, but he also excelled in light comedy. So we’ve got a movie with one of the great light comic actors in film history paired with one of the great beauties of the era in a light romantic comedy. What the hell went wrong?

Yeah, it’s going to be one of those movies, one that is ultimately disappointing because of a great deal of potential and a story that never takes the bat off its shoulder. Tom Winters (Grant) works for the U.S. State Department. He returns from Europe because of the sudden death of his estranged wife. As it happens, Tom has also been estranged from his three children, David (Paul Peterson), Elizabeth (Mimi Gibson), and Robert (Charles Herbert). Tom’s in-laws want to take the kids. Of particular interest in this arrangement is Tom’s sister-in-law Carolyn (Martha Hyer), whose own marriage is on the rocks. Tom, however, decides that it’s better for him to take charge of the children despite not having seen them for years. And yes, wackiness ensues.

In this case, the wackiness comes initially from youngest child Robert, who wanders off during a concert and decides he doesn’t particularly want to go home. Robert encounters Cinzia Zaccardi (Loren), the daughter of a famous conductor. Cinzia is languishing under her father’s rules, although it’s never clearly explained why or how. Anyway, Cinzia eventually brings Robert home and the children more or less demand that Tom hire her as a maid. Cinzia relents, but takes the job to get away from her father. This is despite the fact that she can’t cook, clean, or do laundry.

To increase the wackiness, sister-in-law Carolyn offers Tom and the kids the use of a house on the family property, but the house needs to be moved. Local lothario Angelo (Harry Guardino) gets the job, but is so busy flirting with Cinzia that he leaves the house on a set of railroad tracks and the house is destroyed. Mostly from guilt, Angelo offers the family the use of his leaky, broken-down houseboat, and suddenly we’ve got a location to match the title of the film.

Once we’re on the houseboat, the rest of the film is relationships, and they aren’t that difficult to figure out. Cinzia falls for Tom, who slowly falls for her. Meanwhile, it’s pretty evident to everyone that Carolyn has a thing for Tom as well and is pressuring him into a relationship. Because Cinzia isn’t much in the kitchen, everyone assumes that she’s essentially Tom’s live-in sex doll, something that both he and she are aghast at. Oh, and through all of this, Tom needs to find a way to reconnect with his kids, who all like Cinzia, but would prefer to live with their Aunt Carolyn, who is trying to rope in Tom.

I’ve given you the broad strokes of the second half of the film. My guess is that you can fill in the bulk of what happens, even if you don’t get all of the details right. Suffice it to say that there aren’t a huge number of surprises anywhere here.

That’s not the problem with Houseboat, although it kind of is. I can live with a film that follows a pretty predetermined path from start to finish. Sometimes it’s not about the destination but about the journey to it. The issue here is that even the journey isn’t that good in this case. Tom manages to win over his children almost immediately and without great effort on his part. Hell, I’ve raised one kid and am still raising another, and even with my constant presence in their lives, the course of “winning” them to my side has never been that smooth.

That’s really the issue here. Houseboat wants to be a pleasant little romance and doesn’t want to have to work for anything. None of the problems that happen really become that much of a problem. When the boat comes loose from its mooring and floats down river…eventually Angelo comes and tows it back. Tom claims that he can’t be late for the meeting he has that morning, and then decides that he’s going to be late so it’s not that big of a deal.

There are also a number of musical interludes in this film that don’t seem to make a great deal of sense. I don’t mind a song here or there, but these songs feel like set pieces in something that was original conceived as a musical and then became not-a-musical without all of the songs removed. They don’t fit into the story or the narrative. They seem almost to be filler.

Cary Grant is good for what he’s asked to do. Sadly, he’s not asked to do that much, and he more or less goes through the motions. He’s a lot better in a lot of other movies where he seems to be much more invested in the role and the story. Sophia Loren’s job is to look beautiful. She does that well, but there’s not a great deal asked of her, either.

This was a disappointment. You’ve got two of the great stars of the ear on film together and the result is a tepid comedy and an even more tepid romance. I’m disappointed. I expected better from everyone involved.

Why to watch Houseboat: Cary Grant! Sophia Loren!
Why not to watch: It's by the numbers, and it shows.

Posted by SJHoneywell at 3:02 PM