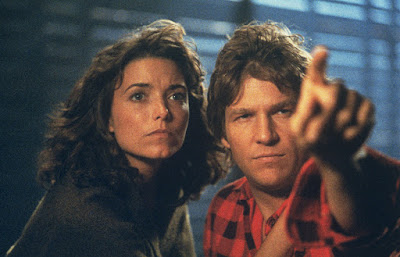 One of my favorite pieces of Oscar trivia is that Wes Craven once directed Meryl Streep to an Oscar-nominated performance. It’s only fair, then that, it would be equally a fun piece of trivia that John Carpenter did essentially the same thing with Jeff Bridges. In some respects, this is more impressive; it would seem that virtually anyone can direct Meryl Streep to a nomination because she’s Meryl Streep. While Jeff Bridges is a fine actor, his three nominations are far fewer than Streep’s. On the other hand, Craven’s oeuvre is virtually entirely horror movies from stem to stern with Music of the Heart standing out as a weird outlier. That’s less true for Carpenter, who worked in other genres, although typically in those not favored by Oscar. Starman is science fiction, so maybe this is still impressive.

The high concept here is that an alien race has intercepted Voyager and decided to come for a visit. Because humanity is awful, the U.S. military shoots down the probe, which crashes in Wisconsin. Out comes a glowing ball of light. It travels to a nearby house belonging to Jenny Hayden (Karen Allen), a recently widowed woman. The light enters her home and, using a lock of hair from a scrapbook, turns itself into a clone of her late husband Scott (Jeff Bridges).

This is our man story. The Starman needs to get to a rendezvous point to meet up with a rescue craft. That point is in Arizona, and if he’s not there in three days, he’ll die. Jenny is natural panicked at first, but when the Starman uses his magical space technology to bring a dead deer back to life, she goes with him willingly. Much of this part of the film focuses on his learning what humanity is and how society works.

Meanwhile, there are government agents and scientists hot on his trail. There’s going to be conflict here, of course. On one side, we have National Security Agency director George Fox (Richard Jaeckel), who wants to capture the alien living or dead, and if alive, has plans to vivisect him. Opposing him is Mark Shermin (Charles Martin Smith) from SETI who, after inspecting the crash site and finding the remnants of Voyager, realizes that the alien has been invited here.

Starman is soft science fiction in that we’re not going to get real explanations for anything. The Starman arrives with a handful of glowing blue spheres that are more or less deus ex machina devices that can do anything he needs them to do. They can raise a deer from the dead, or create a glowing map of the U.S. or send a message to his people. Like a lot of science fiction, the glowing blue balls appear to work on IJW (it just works) technology. As soft science fiction, the Starman is going to have more or less whatever powers he needs to make things happen that need to happen.

A case in point of this is when he and Jenny wind up in Las Vegas and are virtually broke. A quarter in a slot machine comes up just missing a jackpot, but becomes a jackpot when he touches the machine in the right way. He’s not unlike a human version of E.T. Because of this, we’re going to wind up with a film that plays pretty hard with all of the tropes. There’s also a huge problem with the end, but that needs a spoiler tag.

At the end of the film, the Starman naturally makes it to where he needs to get to and flies away into space because that’s how this movie is supposed to end. Before we get there, though, he impregnates Jenny because he’s using a clone of her husband’s body. He tells her that the baby will be the son of her late husband (same DNA, after all), but will also be his son. When he leaves, he gives her the last of his glowing blue spheres. This is supposed to be a happy ending.

The reality, though, is that the government isn’t going to let that fly. The minute they figure out that she’s pregnant, she’s going to vanish into some facility, and that mystical blue sphere is going with her. That kid is going to likely have a short, painful, vivisected life.

Despite the clear problems of Starman, I found it to be a film that I couldn’t dislike. Part of this is that the story is sweet in spite of itself. It’s mainly for the performances, though. I like Karen Allen and I think it’s hard to have a movie that is completely terrible when it features her. She’s good here in addition to her being Karen Allen. Charles Martin Smith is another actor I like. I find him immediately sympathetic, and he very much is here as well. But it’s Jeff Bridges who makes the film work. Somewhere along the way, he made the choice to make the alien in a human body rather bird-like with quick, jerking head movements. It sounds silly, but it works completely.

Is this a great movie? Probably not, but it is a heartfelt one and a very good one.

Why to watch Starman: John Carpenter can make a movie your non-horror fan friends will like.
Why not to watch: It gets a bit trope-y at the end.