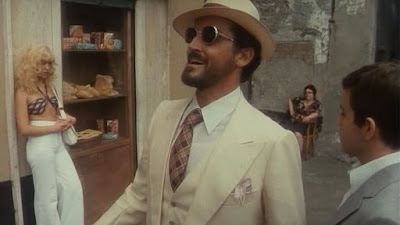 Al Pacino, someone who almost certainly earned any number of Oscars in his career, finally won for Scent of a Woman. That movie is a sort of remake of Profumo di Donna from the mid-1970s. Pacino’s win tends to be considered one of the clearest examples of someone winning a lifetime achievement Oscar in the guise of a competitive one. Pacino’s performance is all bluster and shouting, and I ultimately kind of liked the movie in spite of itself. I was concerned about this original version, though, and now that I’ve seen it, I think I have clear reason why I was hesitant.

One of the big changes here is that Profumo di Donna has substantially less plot than its later remake. The culmination of Scent of a Woman is the “trial” scene. This doesn’t happen in Profumo di Donna. In fact, all of the elements of the remake that don’t deal overtly with the blind former military guy and his desire to end his life don’t appear in the original film at all. The two most famous scenes from Pacino’s film—the speech at the end and the tango—aren’t here. What this means is that Profumo di Donna is about a young Army cadet (not a student) follows around a blind ex-military man and, to use the advertising copy parlance, learns valuable life lessons.

Here’s the thing—there’s not a lot of plot here. I feel like I’ve been writing that a lot lately, but there’s no other way to talk about this film. Literally, the film is that our young cadet, Giovanni Bertazzi (Alessandro Momo) is assigned to accompany a blinded, one-armed veteran named Fausto Consolo (Vittorio Gassman) on a trip to Rome. What we discover eventually is that the blind man intends to end his life along with a friend who was blinded in the same incident. Additionally, Sara (Agostina Belli) is in love with Fausto despite the fact that he is cruel to her. That’s it.

Profumo di Donna hits on a lot of my pet peeves. To start with, our love story (such as it is) is yet another May/December affair. Vittorio Gassmann is almost twice the age of Agostina Belli in this film—he’s 25 years older than she is, and so their romance (based on the flashback) begins when she is probably in her late teens and he is in his early 40s. Why is this supposed to be compelling to anyone?

What’s worse is that Fausto is a complete asshole. He’s a demanding ass when it comes to Giovanni, but that’s just the tip of the iceberg here. He is probably the most overtly sexist, misogynist character I have seen in a film this year and without a doubt the most misogynist character I’m supposed to like. This is a guy who, when presented with a group of young women at his friend’s home, gropes them, paws at them, and calls them whores. And their response is to laugh about this because apparently everyone is infatuated with the blind dude. We’re supposed to like him.

In fact, just about everyone in the film who isn’t Giovanni is a misogynist douche. The other veteran’s assistant more or less treats women the same way that Fausto does. He talks about them in overtly sexual ways in front of them, and of course no one in the film cares about this at all. It’s expected and assumed to be normal.

As much as I hate to say it, this really is the entirety of the movie. The travel, Fausto drinks a lot, has his associate track down prostitutes for him, and treats everyone like shit. Giovanni apparently learns life lessons about treating women badly and getting yelled at by a blind guy who talks about the way young women’s armpits smell.

Uniquely (or close to uniquely), both this version of the film and the 1992 remake have roughly the same average score. For the life of me, I can’t understand why this is the case. As controversial as Pacino’s Oscar win might be, at least the remake isn’t actively mean-spirited. Profumo di Donna is aggressively and actively mean. It’s not funny, it’s not endearing. It’s just crude and ugly.

I don’t get it. This movie is hateful.

Why to watch Profumo di Donna: It’s well made almost in spite of itself.
Why not to watch: Holy shit, but Fausto is a miserable bastard.