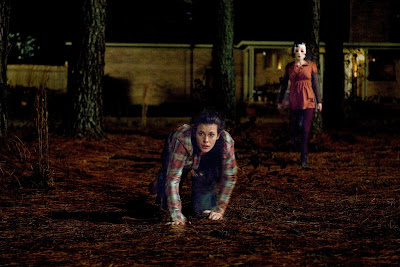 The home invasion horror movie has been around for some time and almost certainly gained a lot of teeth in the aftermath of the Manson Family. One of the premier versions of this story is The Strangers from 2008. The big strength of the movie is also one of the biggest problems with it. We get a home invasion story of three people attacking two people in a home for literally no reason. We’re even told that at the end of the film—this happened for no real reason except that it happened. The randomness is scary and that works for the film. But it also makes this really nihilistic and ugly. Of course, that may be part of the point, too.

So like any movie that is going to eventually feature mindless destruction and chaos for no reason other than the fact that it happens, we’ve got to spend the first chunk of time dealing with our two protagonist characters. To make us care about what is going to happen, we need to care at least a little about them. So, to that end, we’re going to get a fair chunk of time with James (Scott Speedman) and Kristen (Liv Tyler), who have returned from a wedding reception. Through flashback, we learn that at the reception, James has proposed to Kristen, and she has turned him down because she is not ready for that level of commitment. As they try to keep their relationship working, there is a knock on the door. A voice asks for someone who doesn’t live there. Kristen asks for James to go get her a pack of cigarettes (the house is in the middle of nowhere), and the terror starts as three people wearing masks begin terrorizing Kristen and then to two of them when James returns.

That’s it—that’s the whole movie. There are going to be a few iterations of Kristen and James being threatened or stalked by the three attackers. Eventually, it’s going to wrap up with an ending like Funny Games more or less, although it doesn’t have the fourth wall breaks. But this is the entirety of the film: two people are relentlessly terrorized, and (spoiler alert, except that this is literally in the trailer) when they are asked why, they give the reason that our victims were home, and thus there to be victims.

So, as I said above, this is one of those instances where the biggest strength of what we are seeing is also the biggest weakness. This sort of random evil is terrifying. It’s the kind of thing that makes us lock the doors even in the middle nowhere, the sort of awful possibility that makes us sit up in bed when there’s a strange noise in the middle of the night. That our two protagonists did nothing to inspire this means that it could happen to anyone at any time. That’s scary as hell.

But at the same time, we want our movies to make sense. We don’t always get closure in life. Things happen randomly and without purpose. Foreshadowing turns out more often than not to lead to nothing. Fears that we have are unfounded and events both good and bad seem to strike out of nowhere. This is exactly why we want our movies to make sense for us. We want there to be no red herrings. Everything is supposed to wrap up into a neat bow because that’s how we want things to be. The Strangers doesn’t do that. I get it, even if it’s frustrating, but it is very frustrating.

The masks worn by our attackers are a nice touch. Like many masks in a movie like this one, they are absolutely terrifying. But here again we have a problem with the film. The masks don’t really impart any sort of personality to our killers. It’s possible to do this, but The Strangers doesn’t. They’re scary…and that’s pretty much it.

Why to watch The Strangers: Great set-up.
Why not to watch: There’s not a lot here, really.