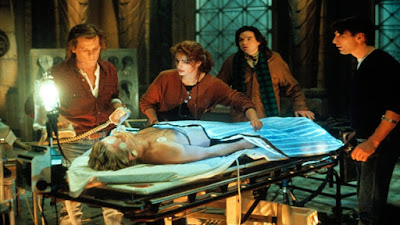 When I started this blog, I made the decision that every review I posted would be a review written based on a recent viewing of the film. There have been cases when I’ve posted a review more than a year after I wrote it, but that writing occurred immediately after the viewing. There are reasons for doing this. The main one, in fact the one that is probably the only relevant one, is that opinions change and people change. The person who reacted to a movie in a particular way in 1992 is not the same person watching it today. With Flatliners from 1990, this rewatching is important, because this is a very different review than I would have written based on memory.

The idea of Flatliners is that a group of medical students decide to experiment into the realm of near-death experiences. In truth, the idea is to go a bit further. Rather than coming close to death and experiencing the “tunnel of light” phenomenon, the goal is to make themselves temporarily brain dead to see if there is anything after death, and then come back. It is, after all, the final frontier in many ways.

Our initial person heading off into the abyss is Nelson Wright (Kiefer Sutherland), who had the initial idea. He’s gone for a little over a minute, an effect that happens through an elaborate use of various medical equipment. He initially experiences something rather euphoric, but that turns darker just before he returns to life. His experience starts a “bidding war” with the other involved students. Joe Hurley (William Baldwin) goes next, and his afterlife experience is pleasantly erotic. And as with Nelson, things start to turn a little strange. Both of them start experiencing something like flashbacks in the real world and their waking life.

For Nelson, these waking flashbacks appear to involve a young boy in a red hoodie who appeared at some point in his death experience. For Joe, it feels (initially) much more personal. Despite being engaged, Joe is a serial “player,” possessing hours of videotapes of him seducing and having sex with other women. He starts to see these playbacks in the real world, and eventually starts seeing the women themselves.

Third to go under is David Labraccio (Kevin Bacon), who flashes back to his childhood and playground scenes. Like the others, he starts having waking recall moments as well that seem surreal. Specifically, a young girl who appeared in his death experience shows up on a train and insults him to the amusement of the other people on the train. Meanwhile, Nelson continues to have visions of this young boy who he names as Billy Mahoney (Joshua Rudoy), who becomes increasingly violent.

Last to go under is Rachel Mannus (Julia Roberts), who sees her father, who killed himself when she was a child. Rachel is consumed with guilt for his death, and begins to have serious doubts about the experiment that was performed, since it seems to show a hellish world after this one for everyone who has experienced death, something that prevents the fifth member, Randy Steckle (Oliver Platt) from dying himself. Eventually, each of the characters begins to take actions to come to terms with these elements of their own past that seem to be intruding into their present. But for Nelson, this may be impossible, since we learn that his tormentor is dead.

I genuinely love the premise of Flatliners. It’s a great idea for a story even if, religiously, it goes somewhere I knew it was going to go. David is put forward as an atheist early in the film, which is his main reason for wanting to experience death himself. Naturally, by the end of the film, he’s shouting at God about any wrongdoing and sins he might have committed. Movies can’t let an atheist be an atheist. If a characters says he or she doesn’t believe in a god at the start of the film, you can bet that he or she will end up devoutly worshipful by the end. That’s no different here.

The movie is also painfully repetitive when it comes not to the death experiences, but the efforts to bring characters back to life. Each death experience involves cooling the body temperature and some chemical concoction. Bringing the person back involves warming them up and various IV/injections and a defibrillator that features someone shouting “Clear!” dramatically. In pretty much every case, it takes multiple shocks and someone has to start CPR and there’s shouting that comes just shy of “Don’t you quit on me! You’ve never quit on anything in your life!” It’s as if the ante needs to be upped each time, but it already starts with that ante pretty high.

The movie also offers us specific cues when something odd is going to happen. When something weird shows up, we get solid blocks of colored lighting—red or blue, typically. In that respect, at least we’re not getting jump scares.

Flatliners isn’t bad. I love the idea. I love that I can say with a straight face that it has a respectable death toll for a movie in which nobody dies. But it does hit the tropes too hard when there was a lot of room to be more interesting.

EDIT: It's been brought to my attention that I said this would have been a different review posted from memory but never said what that review would have been. It's a fair point. In truth, it's hard to say what I would have written from memory. I remember this being scarier than it is--the reality of Flatliners is that it's not that scary at all. I didn't remember the atheist-comes-to-God moment, something I would have interpreted very differently 25 years ago than I do now. I can only say that, like most movies, it's the details that determine how I end up thinking about. The details in Flatliners are less interesting than the main points and drag the film down a bit in my estimation. I'd have been nicer to this from memory, and that's the reason I always rewatch, even if I've seen something a whole bunch of times.

Why to watch Flatliners: Solid premise.
Why not to watch: It’s a trope paradise.