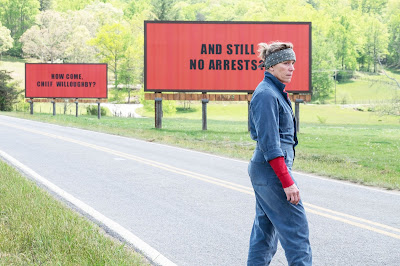 Going into Three Billboards Outside Ebbing, Missouri (hereafter called simple Three Billboards to save space), I knew only a couple of things. I knew first that it won a couple of Oscars in acting categories. I also knew that of the Best Picture nominees, it was probably the most controversial one. A lot of people really liked it; some people didn’t. What makes this different from normal is that the people who didn’t like Three Billboards really didn’t like it. There wasn’t a great deal of casual dislike for it is what I’m saying, at least in my experience.

Having now seen it, I find myself in the position of seeing both sides. I understand why people like it as much as they seem to (the overwhelming ratings on Letterboxd are four and four-and-a-half stars). I also understand why there are people who are upset by it. Three Billboards is a movie that has grand pretensions and lives up to most of them. It’s also a film that is deeply flawed in serious ways.

The film follows a short time in the life of Mildred Hayes (Frances McDormand), whose daughter was raped and murdered seven months before the start of the film. With no movement in the case, Mildred sells off her ex-husband’s tractor trailer and uses the money to buy the three billboards outside the town to specifically call out the local police department for its lack of arrests or even leads in her daughter’s case. She calls out the local police chief, Bill Willoughby (Woody Harrelson) by name. Willoughby is well-liked in the town, and it’s also an open secret that he’s slowly dying of pancreatic cancer. While the townsfolk seem to understand Mildred’s frustration, they also don’t like that their friend Bill, who seems like a good-natured and decent person, is having his name dragged through the mud. Some of this gets taken out on Mildred’s son Robbie (Lucas Hedges).

We also learn that the local police department has its share of problems beyond the stalled investigation. The main problem is the presence of Jason Dixon (Sam Rockwell), an officer who has created issues by allegedly torturing a black prisoner. Ever-loyal to Bill, Jason goes after Red Welby (Caleb Landry Jones), who rented her the billboards and arrests her co-worker and friend Denise (Amanda Warren). Throw into the mix Mildred’s violent ex-husband Charlie (John Hawkes) and his 19-year-old girlfriend (Samara Weaving) and an alcoholic used car dealer (Peter Dinklage) who might be interested in Mildred, and there’s a lot going on.

The fact that there’s so much good here with so much that is clearly not good is what makes this a frustrating film. The good is far easier to parse. It’s well-written in the sense that the characters seem very much like real people rather than the caricatures they could easily have become. The issues are real ones as well. Mildred, who feels guilty over the death of her daughter, just wants closure and refuses to see that sometimes, there just isn’t a clear way to solve a case. Bill Willoughby comes across as a good man caught in something he can’t solve and with problems that go beyond what’s happening with Mildred Hayes.

That’s another plus here: the situation feels like it’s real or could be real. Terrible events happen in the world, and those of us who are left standing around afterwards need to figure out ways to pick up the pieces, even when it seems like there’s no way to keep moving forward. All everyone seems to want to do here is just make it to the next day, hoping that something will make sense eventually.

Plus, there’s the cast. Sure, Frances McDormand is a national treasure. Woody Harrelson (Oscar-nominated, losing to his castmate Sam Rockwell) never really gets the credit he deserves for many of his roles. I’ve long been a fan of Sam Rockwell. But past them, we have so many good actors, some in tiny little roles. I see at this point I haven’t yet mentioned that-guy Zeljko Ivanek, who makes everything he’s in a little bit better.

The problems, though, run deeper. One is minor and is something I’ve railed against over and over. Chief Willoughby, for as much as he seems like a decent guy, is right out of the May/December playbook. His wife (Abbie Cornish) is a good 20 years younger than he is. We’re given that same sort of relationship with Charlie Hayes and his 19-year-old girlfriend, and we’re supposed to think that’s an issue, but we’re not supposed to have a problem with essentially the same relationship with a character we’re supposed to like.

A further problem with Chief Willoughby happens in a scene where he wants a little alone time with his much-younger wife and, to get this, places his young daughters by themselves near a river with instructions not to wander off. This is in a place with an unsolved rape/homicide, and is thus the sort of action we wouldn’t label as being very responsible from a man who, based on his career choice, should certainly know better.

The biggest problem, though, is Jason Dixon as a character. Throughout the movie, Dixon is portrayed in no good light. He’s a racist, he’s violent, and he might well be a drunk. He threatens anyone who stands in his way and at one point commits a pretty horrifying assault in broad daylight. This comes after we have been thoroughly informed that it was Dixon who allegedly tortured a black inmate, and it’s strongly suggested that this happened because the inmate was black. Chief Willoughby puts up with this because in his mind, Jason Dixon is a good man at heart. And to help ram this point home, a significant part of the third act of Three Billboards serves specifically as a way to redeem a character who doesn’t deserve it.

Three Billboards didn’t need to go there. The story we had with Mildred Hayes trying to find not specifically justice for her daughter but closure for herself was enough. Instead, we get a narrative we don’t need and that the character in question didn’t earn because apparently, that’s the narrative we’re supposed to get—that a story about a mother grieving the loss of her daughter is actually about a bad cop trying to be good. It’s a disappointment, especially because the first two thirds of Three Billboards is excellent.

Why to watch Three Billboards Outside Ebbing, Missouri: A cast you’d kill for.
Why not to watch: There are real problems here not easily condensed into a single sentence.