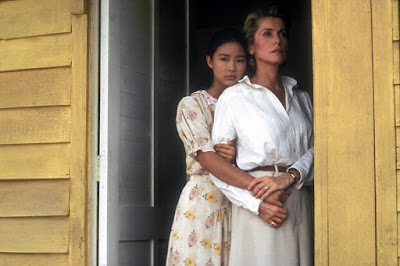 I’m not sure what it is about an epic that makes me a little bit cockeyed going in. Sure, there are epic films that I love. Lawrence of Arabia, for instance, is a true classic, and I’m a huge fan of The Bridge on the River Kwai. But many epics seem to get to that point by some means of unnecessary bloating and padding. You may also notice that the two epics I’ve said I’m a fan of are specifically epics that have no real romance plot or subplot. That’s important, because the romance often seems to be the padding of choice. That’s certainly the case with Indochine.

In fact, Indochine is one of those epics that is essentially a romance set against a huge story. We’re going to get the romance that we (evidently) crave set against the full sweep of history, where the world is changing dramatically and our star-crossed lovers are caught up in those changes and both pushed together and pulled apart by forced beyond their control. I’m not saying anything here that you haven’t seen at least a dozen times. The difference is that this time, that story is happening in what used to be called Indochina (essentially Vietnam, Cambodia, and Laos) and it’s going to be in French.

For me this, is another strike against Indochine--not that it’s in French, but that it’s specifically going to be a story that takes place in a colonial setting. Epics set in this sort of environment--A Passage to India or Out of Africa--don’t have a good track record for me. Since Indochine, which takes place between the two World wars, includes a literal slave market, that’s a track record that is going to continue. I should also say that I don’t have an issue with interracial relationships, but that’s a much more difficult sell in a situation like this, where that interracial relationship is also one that reflects the master/servant dynamic. I know because of the way things are filmed that I’m supposed to think of this relationship as something pure and beautiful and doomed for terrible reasons, but since our man and woman are also (respectively) colonizer and colonized, I find that idea of innocence difficult to believe.

Eliane (Catherine Deneuve) owns a massive rubber plantation in Indochina that she runs with her widowed father (Henri Marteau). When her local, indigenous friends die in a plane crash, Eliane adopts their five-year-old daughter Camille (Ba Hoang as a child, then Linh Dan Pham) and raises her as her own. Despite having a number of suitors, including the head of French security, Guy Asselin (Jean Yanne), Eliane remains single, having discreet, short-term affairs and Camille reaches more or less adulthood.

Through a series of events, a French officer named Jean-Baptiste (Vincent Perez) shows up at the plantation looking for a young child whose boat he burned under suspicion of smuggling. While he is considerably younger than Eliane, the two begin an affair that is opposed by her father. Not too long after this, a convict is shot while escaping, and collapses in the arms of a terrified Camille, who collapses in a dead faint. Jean-Baptiste takes care of her, convincing her that he has “rescued” her, and she immediately falls in love with him. What this means is that not only is the romance we’re given going to rely on the whole colonizer/colonized relationship, it’s also going to walk just on the edge of ephebophilia.

Again, series of events. Jean-Baptiste is sent away, Camille has a sham marriage and goes looking for the man she has fallen for and, when she finally finds him, another series of events causes her to commit a serious crime. He sides with her and suddenly the two are on the lam and he’s a deserter. There are plenty of instances then of them attempting to stay out of the hands of the authorities as they attempt to make their way to China. There’s a child born along the way as well. Oh, and all of this is happening while communist sympathies are rising in the country and it’s getting harder and harder to be French in Indochina.

Indochine won the Oscar for best foreign language feature. Additionally (and the reason I watched), Catherine Deneuve was nominated for Best Actress. I’m not entirely certain why. I like Deneuve, but I have trouble seeing this as a lead role. She’s in maybe half of the scenes. There are huge chunks of the film where she’s nowhere to be found. I would argue that Linh Dan Pham is much more clearly the lead actress here.

That’s the least of Indochine’s problems, though. This is a long and slow film, one that really wants to make sure that you’ve seen all there is to see of a shot of a sampan floating on one body of water or another. It’s also very overblown and over-dramatic. Not a great deal happens here without a full orchestra of strings and a lot of tears or near-tears from most of the cast. It’s all so tragic and hyperbolic. I feel like every third word of this needs to be written in italic to emphasize just how dramatic it all is.

Add to this the inherent colonialism in the story, and you get something difficult on virtually every front. This felt dirty in so many ways, and it goes further by essentially labelling the French as natural parents and the Vietnamese (or Indochinese, perhaps) as the opposite. It’s explicit in the way the narrative turns out.

Normally, I don’t have to be offended for this long when watching something for this blog, so at least Indochine is notable for that.

Why to watch Indochine: If you can’t get enough of big, blustery romances, this is one.
Why not to watch: It’s at least 45 minutes too long for its story.