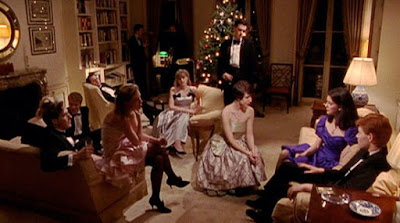 In the end of the blogging swimming pool where I swim, the nicest guy around is Dan Heaton. Dan named his blog, Public Transportation Snob, after a line from Metropolitan. The more I think about this, the more I am fascinated by it. Dan is a genuinely good guy and seems like the complete opposite of the smug, entitled douchebags that populate the world of this film. Clearly, Dan is a fan of this film. It seems incongruous; he’s too nice to like these people.

If you think that’s a hint as to where this review might be going, you’d be right. Metropolitan is more or less a series of conversations among a collection of pseudo-intellectual, filthy rich college students home for Christmas. More specifically, these conversations happen at a series of debutante parties and after parties in New York. Even more specifically, this is about the experience of Tom Townsend (Edward Clements) falling in with this wealthy, preppy crowd.

What we learn is that Tom is firmly middle-class, which makes him destitute compared with his new social group. For whatever reason, Tom attends a dress ball one night and winds up in the company of a group of wealthy socialites. Tom fits in surprisingly well, perhaps because of his socialist views, which seem exotic for the group. There are a few people in this group who become important. One is Nick Smith (Chris Eigerman), a cynic who desperately hates title aristocracy because of his hatred of Rick Von Sloneker (Will Kempe), a baron who acts in decadent, unprincipled ways (according to Nick). Another is Audrey Rouget (Carolyn Farina), a shy debutante who develops a crush on Tom. Another is Charlie Black (Taylor Nichols), a stuttering philosopher who carries a torch for Audrey.

Much of the plot revolves around Tom’s relationship with Serena Slocum (Ellia Thompson). What he learns early on is that Serena is tangential to this group. He also finds out that he was one of many boyfriends of Serena, who used to read his letters aloud to her friends. Despite this, Tom is still infatuated with her, and this infatuation continues despite her dating Nick’s nemesis, Rick Von Sloneker. Serena, it is revealed, is rather awful in this self-absorbed, pretentious way that everyone in the film seems to be. She feels like the aggrieved party when Tom doesn’t spend all his time talking to her despite her having, according to some counts, something like two dozen boyfriends.

The last major plot point is Tom’s relationship with his father. See, Tom’s parents are divorced. It’s revealed over time that Tom was raised with the same sort of wealth as the other characters in the film, but his father has left him and his mother in greatly reduced circumstances. Tom claims to have a decent relationship with his father, but he discovers at one point that his father has thrown away all of his (Tom’s) possessions and moved across the country without telling him. This leads to the conclusion that either Tom is as insufferable as much of the film seems to indicate or that his father is as big of a prick as everyone else in this movie.

It’s the screenplay that was nominated for Metropolitan, and I can understand why; it’s the best part of the movie. But that doesn’t mean that it’s something about the movie that I enjoyed. Sure, it’s clever, and sure it’s filled with educated commentary and witty retorts, but it’s also filled with the sort of people who are aggressively awful. This is a film about entitled people being entitled, knowing that they are, and figuring they deserve it anyway. Charlie, our stammering philosopher, refers to their class as U.H.B., or Uhbs, which stands for Urban Haute Bourgeoisie. And while that’s probably the most appropriate nomenclature, it’s also so arrogant that it’s simultaneously appropriate and infuriating.

And for some reason, I’m in the minority on this film. This thing has an average score of 3.8 on Letterboxd, with more than 1000 reviews of four (out of five) stars. I can’t understand this at all. Again, I understand that it’s well written and even clever in places. But it’s just so infuriatingly stuffy and filled with undeserved arrogance.

So, yeah, I didn’t like this. I didn’t like the characters or their smugness, or the sure knowledge that none of them (were they real) would experience a genuine problem. Why the hell does anyone care about these assholes? I sure as hell don’t.

Why to watch Metropolitan: At the very least, the dialogue is certainly interesting at times.
Why not to watch: I want to punch all of these people until my knuckles are bloody.