The Show Must Go on (and on) 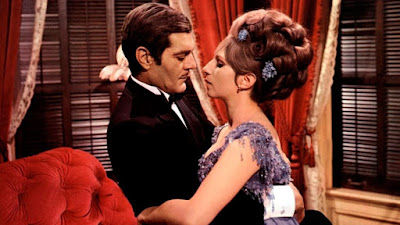 I’m going to be upfront here; Funny Girl is the sort of movie that really isn’t made for me at all. I certainly recognize that Barbra Streisand is a real talent, the sort of performer who, like Judy Garland, can do just about anything and make it work. I just don’t love her. I recognize the talent without being a huge fan of the talent. That puts me in a weird position with a movie like Funny Girl that is very much about Streisand being front and center and on screen for virtually the entire running time that isn’t overture, entr’acte, or closing credits.

Funny Girl is the story of Fanny Brice (Streisand), once and future Ziegfeld Follies girl and a portion of her life. The film doesn’t include her first, short marriage and doesn’t include her third marriage, either. It focuses instead on the bulk of her Ziegfeld career and her marriage to gambler “Nick” Arnstein (Omar Sharif).

Naturally there are going to be a lot of performance numbers. Funny Girl is one of those musicals that is both a traditional musical and one where the singing occurs in the context of a show within the show. We’re going to get plenty of Fanny Brice singing and acting within the context of the Ziegfeld Follies. But we’re also going to get numbers of her singing her feelings, sometimes as internal monologue. We’ll get songs between her and her mother and her mother’s friends, and even Omar Sharif is going to blast out a note or two in some numbers. There are a good dozen or so musical numbers split roughly evenly between songs performed in a show and more traditional musical numbers.

Funny Girl takes place primarily as a massive flashback. We open with Fanny walking into a theater and sitting out in the audience. She begins to reminisce and remembers her strange beginnings on stage, being possessed of an enormous talent but not of the classic looks for the stage. She more or less bulls her way onto the stage despite not being what the show wants and turns a number into an impromptu comedy act. She meets Nick Arnstein after the show, and the two begin a sort of relationship. There’s clearly an attraction between the two of them, but their lives continually pull them in different directions. She has her touring show and he has his various interests, which include poker, travel, and breeding horses.

Eventually, the two end up in the same place for a few days and romance blooms. He sails to Europe and she ditches the Follies to hop onto his cruise ship. She desperately wants to get married and he finally asks her, but he wants to have a bankroll first. He spends the night on the ship playing poker and wins a huge amount of cash. Suddenly we’re back in the States, they’re living in a massive house, and Fanny is pregnant. And soon enough Nick is losing money hand over fist, Fanny is back on the stage, and they’ve moved into an apartment (which is still pretty palatial).

Ultimately, many of the problems experienced by Nick and Fanny come down to Nick’s pride. He doesn’t really want to be Mr. Fanny Brice and he hates the thought of being supported by her. This causes him to take bigger and bigger risks in the hope of paying back his massive and mounting debts. This gets him caught up in an illegal bond deal and gets him sent to prison. And this is where we came in, because now it’s clear that Fanny is waiting for Nick to be released from prison and deciding what to do now that he is back.

Funny Girl is most notable for a couple of reasons. First, it was her first Oscar (she tied with Katherine Hepburn in The Lion in Winter); she won one for Best Original Song a few years later. Second, this is the movie/show from whence we get the song “People,” the one about how people who need people are the luckiest people. It’s probably her greatest signature tune, and it came from here.

What we get with Funny Girl is one of those movies where I fully understand why people like or love it but I can’t get there myself. It’s not the sort of movie that is made for me, though. I can see the talent and the quality. I can understand why Streisand was nominated for an Oscar for this because she absolutely owns the role and owns the screen. Omar Sharif is an admittedly strange choice, but he’s oddly likable in the role. The film also earned a Best Supporting Actress nomination for Key Medford as Fanny’s mother Rose. She’s in the film so little that I find this harder to process. It might also just seem like she’s in the film less because Funny Girl runs 165 minutes if you watch all of the credits.

So I get it, but it’s also the sort of performance from Barbra Streisand that irritates me to no end. It’s very much a musical theater performance. It feels like Fanny Brice needs to constantly be the center of attention. It’s a Liza Minelli in Cabaret-like performance. That’s notable here because way back when I reviewed that film, I mentioned that I really dislike Sally Bowles and yet still had empathy for her. That’s less true of Fanny Brice, whose persona seems to scream out that she wants people to tell her how clever she is constantly. That sort of self-aggrandizement bothers me on a deep level.

So, I get that it’s a cop out to say that this is one of those movies that you’ll like if you like this kind of movie, but it’s honestly where I am. It’s not going to get favorably reviewed from me, but I fully understand why it would by other people.

Why to watch Funny Girl: Babs really is a talent.
Why not to watch: I’m sure Fanny Brice was a talent, too, but I’m not sure I like her that much.