Wednesday Horror: Shadow of the Vampire

Films: Shadow of the Vampire
Format: DVD from DeKalb Public Library on laptop. 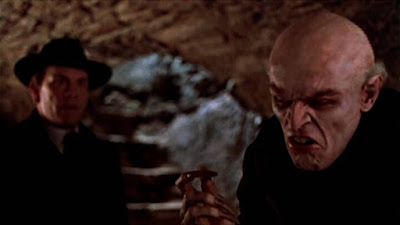 When you talk about great silent films, there are a few names that are going to pop up right away. Nosferatu might not be the first film named, but it’s likely to be one of the first five and almost certainly one of the first ten. Shadow of the Vampire explores the making of Murnau’s film with a very interesting twist. In this version, we have a real vampire to give the film a particular authenticity.

That’s the high concept of Shadow of the Vampire: Murnau’s classic vampire film was made with a real vampire who called himself Max Schreck. It’s a great idea, actually a little surprising that no one thought of it before this. Schreck’s costume as the nosferatu Count Orlock is so strange and otherworldly that it almost makes sense that it truly was an undead creature. The film shifts between the filming of Nosferatu and the cast and crew, shifting from the sepia-toned world of the movie to color as appropriate. Whenever we are in the world of the movie within the movie, it’s made abundantly clear by this small but effective artifice.

The story starts with F.W. Murnau (John Malkovich) wrapping a film with his star Greta Schroder (Catherine McCormack) before preparing to move his people, sets, and equipment to make Nosferatu. Greta isn’t keen on the role since she could probably make more staying in Berlin and working on the stage, but Murnau convinces her to do the film anyway. We’re also introduced to some of the crew, including producer Albin Grau (Udo Kier), cinematographer Wolfgang Muller (Ronan Vibert), and star Gustav von Wangenheim (Eddie Izzard). The crew packs up into a train the next day and heads for a new location.

Murnau tells the cast and crew that the title creature will be played by a man named Max Schreck (“schreck” translates as “fright,” so it’s clearly a stage name) who devotes himself entirely to his roles. He will only appear in character, do his own makeup, always be in costume, and will only film at night. Eventually, the filming starts and Schreck (Willem Dafoe) makes his appearance, completely in character, naturally.

The question that the film desperately needs to answer is why an actual vampire would want to do a film in the first place (and it begs the question of whether or not a vampire, who casts no reflection, would even appear on film). This is eventually answered. Murnau, so keen to get his film made with real authenticity, is willing to make a sacrifice to the monster for his participation. That sacrifice is Greta, who will essentially be fed to the monster at the conclusion of the film, but not until he films his death sequence and all of the shots are in the can.

Things, naturally, don’t go as planned. The creature is unable to control himself at all times, and soon it’s evident that he has been feeding on Wolfgang. This forces Murnau to bring in a new cinematographer, Fritz Arno Wagner (Cary Elwes), leaving the creature alone on the set with the rest of the cast (but, notably, not Greta).

The creature refuses to film any of the scenes on the boat, forcing Murnau to have a replica of the ship created on the grounds of the castle for those scenes. He also refuses to go to Heligoland to film the final sequences. Murnau plays his ace for this—that’s where Greta will be, although he does agree to fly the creature to the final set.

Shadow of the Vampire is an odd film in the sense that it is clearly a horror film, but does not really track with the various tropes of the genre in many ways. There is virtually no blood and no gore at all. It’s more about the actual existence of the nosferatu than it is about anything else. The horror is more in the concept than it is in the actual filming. It’s also in the idea of just how far F.W. Murnau will go to create the movie he wants to make.

The performances are a mixed bag. Malkovich is a bit manic as Murnau, but that’s very much what the story calls for, and I love the casting choice. I tend to like Cary Elwes, but here, I absolutely can’t place his accent. He’s supposed to sound German, I think, but he sounds sometimes German, sometimes Scottish, and sometimes something else. Eddie Izzard is truly brilliant casting, though, just about perfect for someone who needs to walk a line between fear and comedy for most of the story.

It’s Willem Dafoe who shines, though. The man was born to play this role, walking a careful line between obvious desire for blood and a sort of colossal ennui at having lived so long and at having been alone so long. Dafoe, who was nominated in a supporting role, inhabits these ideas beautifully at every moment he is on screen. There’s an animal cunning in the character that is evident in flashes and only comes out truly at the end.

Is there a problem? Yes: the film doesn’t take the ideas it wants to sell to the audience far enough. There’s almost a timidity to the film in where it takes the basic idea. I’ve never been a fan of gore for the sake of gore, but this is a case where the film could have used a little blood and a little ferocity. The film was rated R, but it’s one of the tamest R-rated films I’ve seen in a long time. A little flash of nudity, some drug use, and a little bit of profanity. A few simple cuts of maybe a minute total would get this down to PG-13.

Still, it’s a great concept, and horror often works best when the concept is both fresh and unique. This one is.

Why to watch Shadow of the Vampire: Willem Dafoe was born to play this role.
Why not to watch: It doesn’t really go far enough.