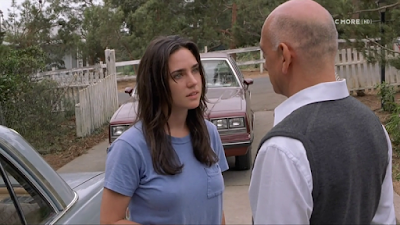 I’m going to go far afield to introduce the idea of House of Sand and Fog because there’s something incredibly important about this movie that needs to be addressed. As will likely surprise no one, I am a huge gaming nerd; it’s possible that I’m a bigger tabletop RPG nerd than I am a movie nerd. One day several years ago during a gaming session, my friend Doug said something that stuck with me that is surprisingly relevant to House of Sand and Fog. For Doug, contemplating a good vs. evil battle wasn’t that interesting. For him, in D&D terms, the most terrifying conflict he could imagine was between two good societies, and specifically between two lawful good societies. Why? Because each of them would have clear reasons to believe themselves to be in the right and to have the moral high ground. Because of this, each would be more likely to fight to the bitter end for those moral principles.

How is that relevant to a film about a house in California? Because it’s kind of the situation we find ourselves in. There are two sides in the conflict we see, and both sides are clearly in the right. So often in a film we’re given good guys and bad guys. Even when the bad guys make sense (see Black Panther from a week ago), they’re still almost always clearly bad guys. That’s not the case with House of Sand and Fog. The two sides in conflict in this film are both very clearly in the right, and we are in a position where at best only one will give what they want or deserve.

Kathy Nicolo (Jennifer Connelly) lives in a small house near San Francisco. She’s a recovering addict who has been abandoned by her husband. Because of her situation, she’s made it a habit to avoid looking at her mail, which in this case causes a real problem. Some of what she has studiously avoided is eviction notices for nonpayment of business taxes. It’s important to note here that these taxes that she owes are based on a clerical error. She doesn’t owe any taxes on the house or on anything else. Nonetheless, since she has ignore the problem until literally the day she is being forcibly removed from the house, she can’t prevent the county from putting her house up for auction.

The buyer of the house is Massoud Amir Behrani (Ben Kingsley), a former Colonel in the Iranian Army who was forcibly emigrated to the United States when the Shah was deposed. For years, Behrani has worked menial jobs in construction and the like while attempting to keep his wife Nadereh (Shohreh Aghdashloo) and son Esmail (Jonathan Ahdout) in a lifestyle he cannot afford. Slowly, the family has been going through their fortune. The auction of Kathy’s house is what Massoud sees as the turning point. He wins the auction for about a quarter of the home’s price and plans to improve it and flip it, and start turning around their finances. Nadereh isn’t a fan of this plan since she claims it will turn them into “gypsies,” but for him, it’s their only option, especially since this will net them a clear $125,000.

And so that’s our conflict. Kathy wants her house back because it’s hers and was taken from her unlawfully. It’s the house she grew up in and inherited from her father. In an instant because of a clerical error, she’s gone from home owner to homeless and living in her car. It’s terribly unfair. At the same time, the Behrani’s while capitalizing on Kathy’s misfortune, have done nothing wrong. In fact, they haven’t even done anything unethical, since they didn’t know about her situation. Selling her back the house at the purchase price is an untenable situation for the Behranis, who are rapidly running through their cash. While it seems like the decent thing to do to sell the house back to Kathy, it would leave them homeless and destitute, and so it’s an untenable situation for them as well.

So who gets the loyalty of the audience? Both parties, even though there’s no way for both parties to come out of this even neutrally. Someone is going to lose and lose big, and no matter if it’s Kathy or the Berhanis, we’re not going to be happy. Putting a third miserable party into this mix seems cruel, but also like the thing to do. Enter cop Lester Burdon (Ron Eldard), in an unhappy marriage and suddenly attracted to Kathy. Attempting to help her, he harasses the Behranis and gets himself in trouble. And once again, we’re not heading for a happy ending here.

That’s probably the biggest issue with House of Sand and Fog, and it’s difficult to realliy call it a problem. The biggest issue I had with the film is that I knew something terrible was going to happen to someone (at least) and possibly (probably) everyone and I didn’t want that to happen. There’s no clear antagonist here, which makes the conflict very real and very terrible.

It’s a hard film to say that I like, so I’m not going to say that. It’s impressive for a lot of reasons, though, not the least of which being the solid performances all around. Kingsley was nominated for Best Actor and Shohreh Aghdashloo was nominated in a supporting role. Jennifer Connolly is often very good and just as often ignored for really good work. Oh, I realize she won an Oscar for A Beautiful Mind, but she is regularly overlooked for really gutsy, difficult roles like this one.

So yeah, this isn’t a happy movie, or a fun one. It is impressive in a lot of respects, though. I’m not sure it’s one I want to watch again, but I’m happy to have seen it.

Why to watch House of Sand and Fog: It’s a great set up for a serious drama.
Why not to watch: You can’t root for everyone and you’ll really want to.