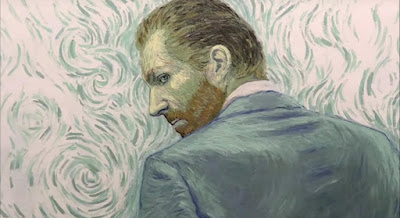 Frequent readers of this blog will know that I’m mostly interested in story. The reviews that I write more often breakdown the narrative of what I’ve watched. I like narrative. I like understanding what makes a story work. Once in a while I get a movie where all considerations of story go out the window. Russian Ark, a film without much plot but that runs just over 90 minutes as a single shot involving massive crowds and orchestras is one such film. The Adventures of Prince Achmed, simplistic in plot but gorgeous in style is another. Loving Vincent now joins this group of films. It’s not about the story for me, here; it’s entirely about the spectacle.

If you follow the Oscars at all, you’ve heard of Loving Vincent almost certainly. If you haven’t, allow me to explain why this is about the spectacle rather than the story. This is a movie that runs just over 90 minutes, and every frame is an oil painting done in the style of Van Gogh. Think about this—95 minutes times 60 seconds per minute times 11 or 12 frames per second adds up to the roughly 65,000 paintings made to generate the film. This is not computer animation made to look like oil paintings—these are actual oil paintings generated from the actors being filmed and rotoscoped. It is ambitious to the point of insanity.

There is a story here. Joseph Roulin (Chris O’Dowd), a postman, is given a letter written by Vincent Van Gogh that was discovered by Van Gogh’s former landlord. It has been a year since Van Gogh’s suicide, and Roulin charges his son Armand (Douglas Booth) to deliver the letter to Theo, Vincent’s brother. Armand sets off to perform this task despite not really wanting to and discovers that Theo has died as well and that Vincent’s suicide is not really accepted as a suicide by a number of people who knew him. Along the way, he meets art supplier Pere Tanguy (John Session), friend and some-time model for Vincent Marguerite Gachet (Saoirse Ronan), and Marguerite’s father, Dr. Gachet (Jerome Flynn), Vincent’s friend and landlord after Vincent’s release from an institution.

There’s a vibe to Loving Vincent at least for part of the run time that is concerned with creating some level of controversy over Van Gogh’s death. The idea that he might have been murdered rather than a suicide is certainly explored for some amount of time. The film offers a few possible explanations of what may have happen, each one at some level of plausibility depending on your point of view.

But honestly, the truth is that I didn’t pay a great deal of attention to the plot. I tried, but there were a number of places that I had to rewatch several times because I stopped listening and really stopped caring about what may have actually happened to Vincent. This isn’t the knock on the movie that it would normally be. It’s honestly difficult to focus on what plot there is here when one is completely overwhelmed by the visuals. In fact, there were multiple places where I had to rewind and watch the same minute or two several times because in multiple iterations, I became so focused on the artwork that I simply stopped paying attention to everything else.

For the movie geek side of me, this is kind of a wonderful thing. It’s easy to continually get lost in the idea of what a film is and what it might represent. It’s easy to navel gaze, and I can do that with the best of them if I’m of a mind to get pointlessly introspective. Loving Vincent is the sort of movie that defines that kind of self-flagellation. It is so much about the raw spectacle, the beauty not just of the individual paintings (the film can be paused on just about any frame and gawked at as if it hung in a gallery) but also of the motion between the frame. The animation is not the sort of fluid 24 frames/second that we may have become accustomed to with other films, but it’s no less magical or beautiful because we can see the seams.

There are times when I look at the world and think that in a lot of cases, we’d be better off if the human race just let global warming do its thing and kill us all off. And then there are times, as with watching Loving Vincent when I realize that we as a species are capable of transcendent beauty. We can be terrible and cruel and we can also be so damnably amazing when we decide to be. Loving Vincent isn’t about the story or the rotoscoping or the performances. It’s about something so beautifully and lovingly crafted that we almost don’t deserve it.

I’ll be blunt: Loving Vincent is not a great movie and perhaps not a lot more than a decent animated film when looked at solely for the content of the story. On the other hand, it is absolutely one of the most sublime film viewing experiences I have ever had.

Why to watch Loving Vincent: It’s holy shit beautiful.
Why not to watch: You’ll be too busy looking at it to really pay that much attention to the story.