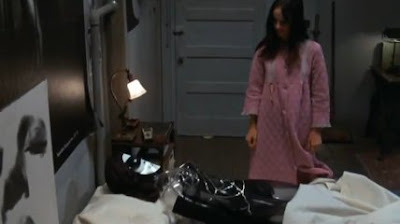 For what it’s worth, not all of these reviews write that easily. Some of them are a real pain in the ass. Private Parts, the weird horror/comedy film from 1972, not the Howard Stern biopic, is of the latter type. I’m honestly not even sure where to begin with this one. I mean, I understand the idea behind it and where it was intended to go, but this is a weird mishmash of things combined to make something really ugly.

Let’s start with the basics. Cheryl Stratton (Ayn Ruymen) is a teenage/early-20s runaway who fled Ohio for California with her friend Judy (Ann Gibbs). The two fight when Judy catches Cheryl watching her have sex, and Cheryl runs again, this time to a Skid Row hotel called the King Edward that happens to be run by her Aunt Martha (Lucille Benson). And, because this is the sort of movie it is, everyone who lives at the King Edward is weird, disturbing, creepy, or awful. This includes a gay priest, a drunk, and most especially photographer George (John Ventantonio), Aunt Martha’s son.

So here’s what you need to know to move forward with Private Parts. First, Aunt Martha loves going to funerals because she believes she can photograph the moment a spirit leaves the body, which happens a day or two after embalming, evidently. She’s also furiously moral in the Carrie’s mother sort of way—everyone is a pervert except for her, essentially. Cheryl is hopelessly naïve, but desperately wants to be taken as a woman, so when George starts to show a little bit of interest in her, she responds.

So let’s talk about that, because it gets to the heart of at least a portion of what Private Parts wants to be about. This is a film that at least in part wants to be about voyeurism. Someone, soon revealed to be George, starts leaving clothing out for Cheryl and asking her to wear it. This leads to Cheryl taking a bath in a really nasty bathtub while wearing a mask. It also gives us scenes of George filling a sex doll with water and attaching a black-and-white photograph of Cheryl’s face to it before he injects it with a syringe filled with his own blood. Yeah, that happens.

Even if we get beyond the fact that George is creeping on his cousin and injecting and effigy of her with his own blood and that Cheryl appears to be fine with being leered at as a sex object by her cousin, this is the most unpleasant eroticism I’ve come across in a long time. It’s just gross and unpleasant. At least Ayn Ruymen was in her mid-20s, so the brief moments of nudity aren’t even more morally questionable (considering the age she’s supposed to be playing here).

That’s more or less where I am here. Private Parts is just grotesquery for its own sake. I think it’s likely that director Paul Bartel would argue that there is some sort of message going on here, but I don’t think there is. You can claim that this is about voyeurism, and well it may be. But it’s so unpleasant. It’s not even interestingly weird or creepy. It gets to the point where it’s not even sexually weird—it’s just physically dirty. Like all of this is happening in a building that used to be a drug den and should be condemned. Everything is stained and filthy. The entire movie looks like it was dynamited the minute filming wrapped.

And yeah, once we get to the third act things get a lot weirder and creepier and Private Parts heads to some places that are supposed to be the sort of things that would end up in tabloids. Again, this is probably supposed to be voyeuristic and salacious, but it ends up being just kind of nausea-inducing, and not in any interesting way. It’s just retrograde psychology thrown out there to make the audience point and say, “Ick!”

I can sum things up this way: our main character Cheryl has her name inconsistently pronounced throughout the film. We’re told that her name is pronounced “CHAIR-ul” in many cases. She corrects people frequently. So it’s not too shocking when “SHARE-ul” gets corrected. Except that she herself calls herself “SHARE-ul” multiple times. So the main character of the film can’t even get her own name consistently correct. That’s exactly where we are here.

Posted by SJHoneywell at 5:51 PM