Films: Maniac (1980)
Format: DVD from NetFlix on The New Portable. 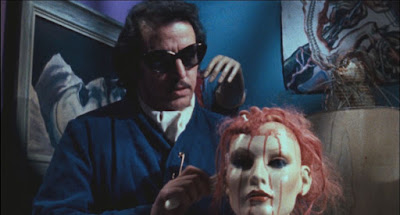 I know I’ve referenced the Video Bug a few times in the past here. For those who might be new to this site (or for whom existence doesn’t revolve around the minutiae of this blog), the Video Bug was the first video rental store of my childhood. Like all video rental places of the early- and mid-1980s, a vast number of their movies for rent (both VHS and Betamax) were on the lower end of the cinematic spectrum. One movie you could guarantee would be available, sitting between The Last House on the Left and Mother’s Day was Maniac. The cover art told you everything you needed to know. On the box, we see a man wearing jeans from the waist down. His right hand grips a large knife. In his left is a mass of hair—it’s not a decapitated head, but a scalp. Scrawled over the title of the film are the words, “I warned you not to go out tonight!” Casablanca this ain’t.

I’m not going to hold back here. There’s not a lot to recommend Maniac. This is low grade exploitation exactly at the level that the box art would suggest. It’s not a complete waste of time or effort. There are some things here that are worth seeing, but overall, Maniac is trash cinema. I’m not saying that to recommend people away from it; I’m saying it because it’s simply true.

It’s also a film that doesn’t really have much of a plot. In place of a plot, it has a disturbed central character, a psychosis straight out of Freud, and a series of events. Frank Zito (Joe Spinell) is, in best Psycho tradition, obsessed with his dead mother, who was both a prostitute and abusive; she locked him in a closet when she was with clients. Naturally this means that as an adult, Joe tracks down women and kills them. Specifically, he kills them, scalps them, and then nails their bloody scalps onto mannequins he keeps around his apartment. Naturally, he talks to the mannequins as well, assuming that all of them are his mother. Yes, this is exactly the level of psychology we’re going to get with Maniac.

That’s honestly it. At one point, Frank becomes involved with a photographer (Caroline Munro) who snaps his picture one day in Central Park, but eventually he attacks her as well near the end of the film. Everything else is just a series of predatory attacks on women. I get the slasher genre and I especially understand the tropes form this era, but far more than most movies of its kind, Maniac really doesn’t like women at all. Of course, to be fair, it also doesn’t think that highly of men.

What’s strange here is that Maniac really wants to associate itself with some level of artistic credibility. There are clearly connections to Psycho, and it doesn’t at all try to hide those connections. There are also moments when I think director William Lustig is trying to copy elements of Taxi Driver. That’s really attempting to punch above his weight for a guy who has 12 directorial credits on IMDb, a full third of which include the word “maniac” in the title.

The main reason to pay any attention to Maniac is the dedicated and gonzo performance from Joe Spinell. He’s a terrible, even disgusting figure in this. He’s sweaty, greasy, bloated, and unpleasant. The performance he gives as Frank is completely committed to the idea, though. He goes for it on a level that a movie like Maniac really doesn’t deserve. He’s far better than the material he’s given.

Truthfully, there isn’t much here worth recommending. This is, as I said above, trash cinema. It’s not intended to have any sort of real value. I’m not even sure it’s really supposed to be entertaining. It’s supposed to be the sort of film that you dare other people to watch. In 1980, it was undoubtedly shocking and terrible, the sort of film that your older brother had seen (or your friends’ older brothers) because you weren’t allowed to rent movies like this. Watch it now, and you wonder what the fuss was about. It really hasn’t aged well.

Why to watch Maniac (1980): Slasher street cred and a better-than-it-deserves performance from Joe Spinell.
Why not to watch: This is the definition of sleaze cinema.