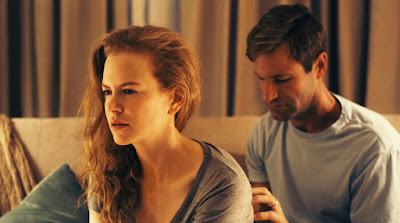 As I get closer and closer to finishing up the Oscar lists I have set for myself, each movie I watch brings up a particular question: why have I not watched this one yet? For some, it comes down to availability. For others, it’s more about the film’s subject matter. There are some films I just don’t want to watch because of what they’re about. Rabbit Hole is about parents who lost their four-year-old son in a terrible accident. This is precisely why I haven’t seen it until tonight.

I don’t like stories involving the very real grief of losing a child. I mind it far less when this is attached to a horror movie because of the inherent unreality of that situation. With a realistic story involving a child’s death, I end up feeling a lot more vulnerable as a parent. I end up watching films like Rabbit Hole rocking back and forth in my seat. As good as the movie might turn out to be, I know I’m in for a rough ride. At least Rabbit Hole has the decency to not have us live through the child’s actual death. The movie starts eight months after the accident.

That being said, this is exactly what we’re going to be dealing with for the entire film. Married couple Becca (Nicole Kidman) and Howie (Aaron Eckhart) lost their young son in an accident. We learn eventually that their dog ran across the street and their son followed him and was struck by a car. Since the accident, Becca and Howie have more or less been going through the motions of their life, living from day to day as best they can, more or less existing rather than living. Their week is broken up by a support group that Howie finds valuable but that Becca resents.

What Rabbit Hole is really about is how Becca and Howie process their grief differently. The event that brings this on is the announcement that Becca’s sister Izzy (Tammy Blanchard) is pregnant. For her, this triggers a sudden need to give her son’s clothing to her sister, which causes her to want to pack up more of his things and eventually to sell their house. For Howie, this feels too soon.

Howie throws himself into the support group, eventually growing closer to Gabby (Sandra Oh), an eight-year veteran of the group. When she and Howie both start showing up alone, they bond by smoking pot in her car before the meetings. She admits that her husband has left her, and while he is tempted, he decides that despite their problems, he still loves his wife. Meanwhile, Becca’s mother Nat (Dianne Wiest) tries to bond with her based on her losing her son, Becca’s brother, to an overdose. As with the group, Becca ultimately finds this offensive, since their deaths were so different.

Becca’s release comes from a completely unexpected source: meeting with Jason (Miles Teller), the person who hit her son with his car. He deals with his guilt by constructing a comic book he calls “Rabbit Hole” about a young boy searching for his dead scientist father in different parallel universes.

I can’t say that Rabbit Hole is enjoyable as a film, but there are moments where I appreciate the writing about as much as I have in any film. At one point, Becca and Nat pack Becca’s son’s toy away and take them down to the basement. It is here where Becca finally understands her mother’s grief. Nat, trying to explain, says that over time, the grief becomes something different, like a brick you carry in your pocket because it’s what you have instead of your child. It’s such a beautiful, relatable way to describe that pain; it’s instantly understandable.

I also relate completely to Nicole Kidman’s reaction to her own grief. For much of the film, she walls things off completely. Her need to pack up her son’s things and to get rid of the child seat in the car are completely understandable to me, since I think I process grief in much the same way. It can seem cold to people, but it’s entirely self defense, not letting the pain out because it’s simply too much. Her reaction to religious reasons for her child’s death also feel very familiar to me.

In fact, the only thing I’m not sure about is why Nicole Kidman got the only nomination here. This is not to denigrate her performance, which I think is one of her better ones. But Aaron Eckhart deserves a great deal of the credit here, as does Dianne Wiest. I’m ambivalent on Sandra Oh (I think it’s because I hated the show Arli$$), but she’s good her as well. I’m even not entirely disappointed by Miles Teller’s eminently punchable face. I’m also very much in favor of any movie that provides work for the underused and underappreciated Giancarlo Esposito, who plays the father of Izzy’s unborn child.

I don’t know that I’ll watch this again, but I appreciate it for what it is, as depressing as that might well be.

Why to watch Rabbit Hole: It feels like honest grief.
Why not to watch: Holy shit, but it hurts.