The (Very) Slow Passage of Time 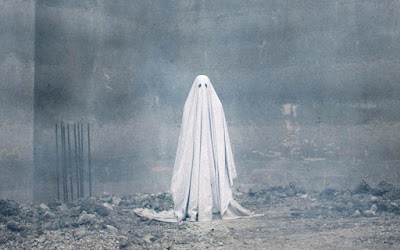 Sometimes, this hobby is a frustrating one. I don’t expect to love every movie that I watch, but I’m not always game for a film that is going to more or less be work. A Ghost Story, for much of its 92-minute running time, is work. This is one of those films where nothing happens for a very long time. Sometimes, like with the films of Robert Bresson, that can work for me. Other times, that becomes not unlike sitting through Jeanne Dielmann and I want to pull my own head off. Oddly, A Ghost Story is both.

This is not a plot-heavy film. A musician (Casey Affleck) and his wife (Rooney Mara) live in a house, evidently in or around Dallas. She wants to leave and he doesn’t. One night, something makes a noise on the piano, but they can’t find a cause. Soon after, he is killed in a car accident. His wife identifies the body. When everyone has left, he sits up, still covered in the sheet. That sheet is going to be important, because our spirit is going to spend the rest of the film wearing it much like the old-school depiction of a ghost, a sheet with eye holes cut into it.

It soon becomes evident that our ghost has, much like the hero of Kurt Vonnegut’s Slaughterhouse-Five, has become unstuck in time. We’re going to see other residents of the house—a Mexican mother and her two children, another group of people at a party, a future high-rise office complex, and a past family of settlers. Through all of this, the sheet-shrouded ghost watches. The time changes are reminiscent in a way of the very end of 2001: A Space Odyssey, where the turn of a head moves us forward or backward in time substantially. We see people moving into the house and moments later, it’s Christmas, and then we’ve moved on again.

There are two other driving plot points here. One is that the ghost’s wife tells him early in the film that when she was little, her family moved a lot. She would stick notes places in case she wanted to come back to them, so that there would be something of her wherever she had lived. After her husband’s death, she eventually leaves the house, but sticks a note in the crevice of a wall before she goes. During times when the house is unoccupied, he attempts to retrieve the note.

The other plot point is that the neighboring house also has a sheet-covered ghost. It and our ghost can communicate wordlessly with each other, evidently by subtitle. The neighbor ghost claims to be waiting for someone, but can no longer remember who.

I am neither kidding nor exaggerating when I say that there are times in A Ghost Story where it is impossible to know if the film is paused or running. There are long sequences where nothing, or not much of something, happens. For instance, at one point, Rooney Mara eats a pie. I don’t mean that she eats a piece of pie; I mean that she eats a pie for about five minutes, just attacking it with a fork and shoveling it into her face until she eventually runs out of the room and vomits. So it wasn’t without cause that I made the comparison at the top to Jeanne Dielmann. After she identifies the body and leaves, nothing happens for what feels like two minutes until he sits up. It’s a static shot of nothing moving.

I don’t know how A Ghost Story manages to do this, but at some point while watching, I moved from being decidedly frustrated with the film to finding it moving and even beautiful. I’m not sure how it pulled this off, but it did. It did this late, though—I was frustrated and annoyed with the film for a good percentage of its running time. But here I am saying that I want to watch it again to see what I might have missed. There is something that requires a spoiler tag, though. It’s not truly a spoiler, but it does discuss what happens at the end.

Of course at the end of the film our ghost is going to wiggle the note out of the space in the wall and read it, and once the note is read, the ghost vanishes, the sheet dropping to the floor unoccupied. We don’t get to see what is on the note. I haven’t yet decided if I approve of the unanswered mystery, as with Bill Murray’s whispered comments at the end of Lost in Translation or if it bothers me like the unviewed painting in La Belle Noiseuse.

I liked A Ghost Story in spite of its slowness. There is a stately beauty here, and what begins as an exercise in patience becomes a meditation on time and loss. It’s not an easy film to recommend. It’s the sort of film that will polarize audiences almost by design. Take your chances—you might end up at the same place I did. And you might not.

Why to watch A Ghost Story: It’s inexplicably moving and beautiful.
Why not to watch: There are moments where it’s impossible to tell if the film is paused or not.