Come on Baby, Light My Fire

Films: Joan of Arc
Format: DVD from NetFlix on The New Portable. 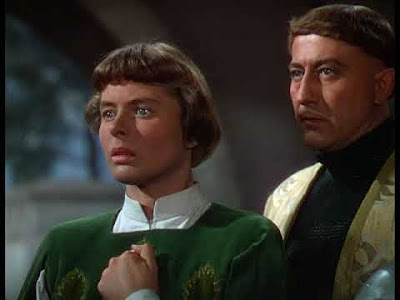 As I get down to the last few dozen movies on my Oscars lists, I’m starting to find more and more movies that I avoided for one reason or another. With Joan of Arc, my avoidance happened because the movie wasn’t available anywhere I looked. Oh, I found a shortened version on YouTube that cut something like 45 minutes out of the theatrical release. I’d have watched that if I got desperate enough. But lo! and behold, suddenly NetFlix is carrying the film once again. I have to say this is one that, had I not had it on a list, I’d have walked away from partway through.

Joan of Arc isn’t a bad film; it’s just not a great one, or even a very good one. It’s long and talky and it doesn’t pull this off that well, which means that it’s also long and boring. It suffers as well from putting a mid-30s Ingrid Bergman in the role of a French teenager. We’ll get to that soon enough.

Joan of Arc was intended to be exactly what it claims to be by the title—the story of the young Maid of Orleans who, thanks to visions of saints, believed herself destined to lead the armies of the Dauphin and restore his place on the throne. Joan (played by Bergman, if that wasn’t clear) is eventually betrayed, at least in her own mind, when the Dauphin (Jose Ferrer in his screen debut, and for which he was nominated for a supporting Oscar) sues for peace despite being in the position of winning the war. Joan rebels against this, feeling as if all she has done will be for naught. And, eventually, she is tried for all manner of crimes. That said, while the charges against her include things like heresy and witchcraft, it certainly seems like she is condemned and burned at the stake for dressing in men’s clothing.

Here’s the thing—I tend to spend a lot of time on narrative, and this is the third review in a row where I’m given a film that doesn’t offer me a great deal to talk about on that front. Oh, there’s plenty of story in Joan of Arc and a huge cast of characters, but nothing really much seems to happen here. People talk at Joan, who more or less refers to the voices in her head to respond. She’s tested over and over and consistently proves to be right about things, making her either prophetic (what many seem to believe), insightfully smart (entirely possible), or wildly lucky.

And while that has the potential to be interesting, it’s not. It’s just fat guys in robes shouting at Ingrid Bergman. It’s also odd to me that Bergman is the only person on camera with her particular accent. Her parents sound like they’re from the Atlantic coast of the U.S. and Bergman sounds Swedish. It’s the weirdest thing because it’s impossible not to see (or hear) this, and no one seems to notice the fact that Joan sounds like she just arrived from a couple countries away. Her brothers sound like her parents. It’s just…jarring.

It’s a problem, too, because a definitive filmed version of at least a part of Jeanne d’Arc’s life was made in the silent era. It’s a story that has been attempted several times, but no one has managed to do anything better or more impressive than The Passion of Joan of Arc. It’s still the definitive version of her trial at the very least, the sort of thing that made even a heretic like me see something spiritual.

That’s a problem here, too. There’s plenty of God bothering and talk about the saints here, but none of it really seems that earnest or honest. Bergman, as good as she is, feels like she is going through the motions here. I don’t buy the piety the way I did with The Passion of Joan of Arc, because that felt real, and this feels like it’s been scripted. I’ll freely admit that my own distrust and head-scratching relationship with the divine and supernatural may well account for this, but it can’t account for it entirely. I’ve certainly seen at least sparks of that in other films and there’s none of that here.

From what I understand, this was a story that Ingrid Bergman wanted to bring to the screen for years. Had she been able to get the project made and financed a decade earlier, it would have at least been more believable to have her in the role rather than playing essentially half her age. It simply doesn’t work, and even if the piety didn’t seem artificial, that would pull me out of the story immediately.

I go into every movie I watch hopeful that it will be good. I genuinely want the movie to work and be interesting. This one admittedly had an uphill road, but other films have made it up that mountain before. There’s not enough here to get it over the hump, though. It’s long, it’s laborious, and not nearly enough happens that is interesting. The battles are tame, and even Joan’s execution isn’t that interesting. When you can’t make burning at the stake worth watching, I think you might have a big problem.

Why to watch Joan of Arc: Ingrid Bergman, I guess?
Why not to watch: It’s long and talky.