Film: Lovers and Other Strangers
Format: Internet video on the latest internet machine. 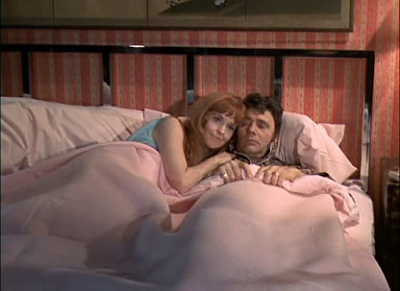 As the saying goes, dying is easy; comedy is hard. I’m certain that good comedy is incredibly hard to write, and I’m not going to pretend that I’m any good at it or that I have advice for people who write comedy. To me, though, the thing that would be the most difficult in terms of comedy is not so much the comedy, but making it funny for longer than a couple of years. Comedy doesn’t last in a lot of cases. Watch early episodes of Saturday Night Live, for instance, or SCTV. As much as you want it to, it just doesn’t hold up. That’s exactly the position we’re in with Lovers and Other Strangers.

This is supposed to be something like a sex comedy, sort of. At least a great deal of what we’re going to be dealing with is a variety of sexual relationships, each one more or less stereotypical in some way and each one different from the others. All of these relationships circle around the central story, the upcoming marriage of Mike Vecchio (Michael Brandon) and Susan Henderson (Bonnie Bedelia). Now, because this is exactly this sort of movie, what we’re going to get is a bunch of relationships, all with problems of one sort or another, crashing into each other.

Mike’s parents Frank (Richard S. Castellano, nominated in a supporting role) and Bea (Bea Arthur) are happy that Mike is getting married, but are concerned about his brother Ritche (Joseph Hindy), who has told them that he and his wife Joan (Diane Keaton) are getting divorced. Concerned that this will cast a pall on the wedding (one that Mike is starting to have second thoughts about), they pull out all the stops to get Ritchie to stay with Joan, even if just for appearances.

Susan’s parents Hal (Gig Young) and Bernice (Cloris Leachman) appear to be a perfect couple, but there’s trouble in this house as well despite their obvious comfortable lifestyle. Their marriage, while not loveless, seems to be relatively affectionless. This is in part because Hal is having an affair with Kathy (Anne Jackson), who is Bernice’s sister. Kathy is what would be considered at the time a spinster, mostly because she has been waiting for Hal to leave his wife for her, something he continually promises and continually refuses to do.

Oh, we’re not done, not by a long shot. Susan’s sister Wilma (Anne Meara) and her husband Johnny (Harry Guardino) have two kids and evidently not enough sex. Johnny is uninterested in sex in general, something that Wilma complains about, often accusing him of being gay while he accuses her of wanting to be the man in the relationship. Finally, we have the brand new relationship of Brenda (Marian Hailey) and Jerry (Bob Dishy), a bridesmaid and usher respectively. Brenda is Susan’s cousin and the two have been set up as a couple for the wedding. For the intellectually-minded Brenda, this means the hope of an emotional connection. For Jerry, it means a chance at sex. Despite his being something of a nerd, he views himself as a player, something Brenda is not terribly concerned about.

One would think that a movie about relationships would be timeless in some way. After all, there are plenty of movies that are far older than this one that still have relationships that are interesting and worth seeing. The problem with Lovers and Other Strangers isn’t the relationships themselves, but the comedy that is thrust into them. The comedy has not survived the past 48 or so years. Things that were evidently screamingly funny in 1970 are embarrassing, shocking, unfunny, or offensive now. The relationship between Wilma and Johnny is a case in point. Even if we can forgive the “she wants more sex than he does” comedy trope that seems to appear in television sit-coms and pretty much nowhere else, there are serious issues here. Johnny is borderline misogynist, something that might have played in 1970 but plays a lot less today. There’s still a bit of comedy here in the sense that Johnny more or less begs Wilma to let him be in charge, a clear indication that he isn’t.

The same is true of the relationship between Brenda and Jerry. Jerry just wants sex and nothing beyond that; he doesn’t pretend that he wants anything more than a roll in the hay. Brenda fends him off as well as she can. It’s not always clear if she knows what Jerry wants because of naivety or because she is so dedicated to the idea of forging a deeper, more spiritual connection. Much of her time is spent asking Jerry if he has read one book or another as a way to explain her philosophy. Eventually, they will form something like a couple, with Brenda sleeping in post-coital peace while Jerry works his way through one of the many books she has talked about.

The truth is that Lovers and Other Strangers is not a film that has aged well at all. It’s got a wonderful cast from top to bottom, and it earnestly wants to be funny. But to make it funny, to even make it something close to pleasant, you need a time machine.

Why to watch Lovers and Other Strangers: Great cast.
Why not to watch: This has aged about as well as a cabbage.