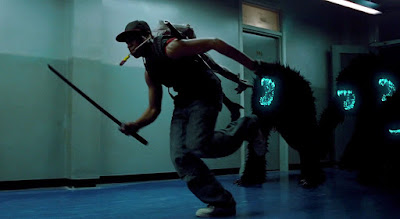 I love science fiction movies as a general rule. I don’t mean that I love all of them, of course, because there are plenty that I don’t like, but I’m predisposed to like them. When they are even mildly good, I like them. When they’re great, I love them. Attack the Block is great, and it’s great not despite its relatively small budget, but because of it. It also has a fantastic cast for a movie like this one, as well as the best alien creature design since, well, Alien.

You could argue that in 2011, John Boyega was not a known quantity, and thus having him in a major role wasn’t so much getting a great actor for a movie like this as it was discovering an actor who would go on to bigger things. Okay, sure, but Nick Frost is here in a small role and this is after both Shaun of the Dead and Hot Fuzz. And, yes, it’s multiple years before Jodie Whittaker became the 13th Doctor, but well after a good start on her movie career. Seriously, for a film with an estimated $13 million budget, there’s some real talent here.

We start with a robbery. Sam (Jodie Whittaker) is coming home from work when she is accosted by a gang of kids who, it turns out, live in the same apartment building that she does. These kids are Moses (John Boyega), Pest (Alex Esmail), Jerome (Leeon Jones), Dennis (Franz Drameh), and Biggz (Simon Howard). They take her phone, wallet, and ring before letting her run off into the building. Immediately following this, something crashes into a parked car. It turns out that this thing is actually an alien creature that attacks and wounds Moses, who eventually kills it.

The kids realize that this thing is not an animal that they (or anyone) has ever seen before. The safest place on the block to store it is in Ron’s (Nick Frost) weed room. Ron is a dealer working for Hi-Hatz (Jumayn Hunter), who is the main and perhaps only dealer on the block. They arrange to keep the now-dead alien in the weed room, and Hi-Hatz offers a job to Moses, making him the block equivalent of a made man. This is also where we are introduced to Brewis (Luke Treadaway), a zoology student at a nearby university and one of Ron’s best customers.

Of course, that alien wasn’t the only part of the invasion. Soon enough, more and more of the aliens come crashing to earth, and now these kids, Sam, Ron and Brewis, and a few others aware of what is going on need to protect their apartment building from the incoming invasion.

So let’s talk about what works here. First, Attack the Block gives us very real characters. The kids, who are going to be the ones that we spend the most time with, are introduced to us as criminals, and very soon are the characters we’re rooting for. That’s not always easy to do—criminals are frequently the heroes of movies, but rarely petty criminals and muggers. But we get a lot of reasons to sympathize with these characters, especially Moses.

We also get a very good and smart plot. Sure, it’s science fiction and alien invasion on top of that, but this is a plot that makes real sense. It builds well, and there are no ridiculous jumps in logic or bad science. The characters are smart and act in ways that indicate just how smart they really are. I love that it holds together as well as it does.

And then there are the aliens themselves. These are tremendously cool creatures. Eyeless, with glowing teeth, fast and feral, they are genuinely frightening and also completely different from anything seen before. They’re a fantastic addition to the genre of space monsters.

So what does Attack the Block do wrong? Not much. The language is difficult if you’re not prepared for it. The kids speak entirely in a South London slang, and while it can be followed, it’s now always easy to understand everything they are saying. The accent is a part of this as well. Subtitles genuinely help in terms of what they are actually saying, but it’s not unlike reading “A Clockwork Orange” without a glossary, at least initially.

But, that’s a small complaint, and as someone who is fascinated by slang, it’s not a complaint I have. Attack the Block is as good an alien invasion movie as you’re going to find.

Posted by SJHoneywell at 7:52 PM