Film: The Bold and the Brave
Format: Internet video on laptop. 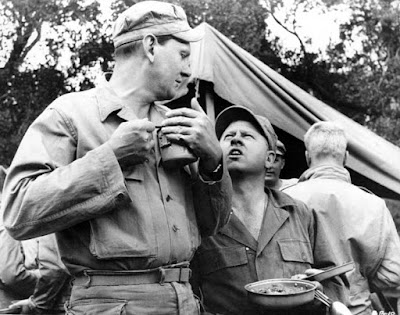 War movies are always interesting to me in some respects. They are a way to gauge the particular view of the world of a given time, or at least of the people making the film. Since it seems like we are constantly at war somewhere, the motive for making a war film seems rarely to be about the war itself and more about the attitude of the filmmakers toward war. With a film like The Bold and the Brave, filmed after the Korean War and before American involvement in Vietnam, the purpose is perhaps cloudier, especially with the mission that ends the film. Is this a heroic story or one that wants to put forth the idea the war has no real winners? Sadly, it’s probably the former, especially when there’s a sense of glorifying combat and the film taking place in the Italian campaign of World War II—playing to some of the country’s greatest military hits tends to skew the perspective.

We’re not going to get a lot of war for the first two acts of the movie. Instead, we’re going to be introduced to three soldiers. The first is Fairchild (Wendell Corey), who we learn soon after the film’s opening has serious qualms about pulling the trigger on his weapon. The second is Dooley (Mickey Rooney), quick with the girls despite being married and always up for a game of craps. Third is one nicknamed Preacher (Don Taylor), who sees the world in black and white ways, with anything that isn’t capital-G Good being capital-E Evil.

The first two acts are essentially the stories of Preacher and then Dooley. Realizing that Preacher is a dud, Dooley, and then reluctantly Fairchild, arrange for him to be more or less picked up by an Italian prostitute named Fiamma (Nicole Maurey). Their goal, more or less, is to get Preacher laid so he won’t be such a hardass, but the plan backfires. Fiamma and Preacher end up falling for each other, a problem when Preacher comes to realize exactly how Fiamma has survived the war up to this point. Naturally, there is an angry break up and a lot of tears.

Dooley, we find out, has been sending home all of his pay to his wife Jeannie. His dream is to open a restaurant in New Jersey, but he doesn’t want any help (it’s implied that Fairchild is wealthy). Near the end of the second act, Dooley gets on a hot streak in a craps game and walks away with something north of $30,000—something close to half a million dollars in 1944 money. But before he can do anything with his wealth, Preacher, still angry over the Fiamma fiasco, orders him out on patrol. Not wanting to be robbed, Dooley pads his uniform with the money, which is going to lead to our third act confrontation and the film’s denouement.

The hell of The Bold and the Brave is that we spend the most time with the worst character. Fairchild, morally conflicted about killing even when placed in a situation where not doing so will get him killed, is easily the most interesting of the three men. Dooley, quick with a joke and played well enough to earn Rooney a Best Supporting Actor nomination, is absolutely the most fun. Even Fiamma, clichéd though she is as the woman who has fallen but only because she had no other choice, has a story that might be worth hearing. So, naturally, we’re going to spend the most time with Preacher, who is incapable of thinking with any nuance, acting in any way other than as a moralizing prick, and as judgmental as any Baptist firebrand who has just stepped away from the pulpit.

And that’s the story here. The Bold and the Brave is misfocused. Give us a story about Dooley and Fairchild and I’m all in. Make Preacher the foil instead of some half-assed reluctant romantic hero, and I’m all in. These are the guys who are interesting to see do things. These are the guys who at least potentially have stories that are worth hearing.

This is especially true since all of the interest created regarding Fairchild is essentially wasted by the end of the film and wasted in exactly the way you think it’s going to be. The combat sequence that comprises the third act has some possibilities that could make the film relevant and worth seeing, but it squanders all of them. We have a chance to see Fairchild’s perceived cowardice played a different way, or to see Preacher’s good/evil paradigm challenged. In fact, both of these are hinted at, and nothing is done with them.

For all this, it’s some of Mickey Rooney’s best work. I’m not a huge Rooney fan, but he’s likeable, or at least approaches that here. Sure, he’s boisterous and loud and obnoxious, but he’s also a lot of fun. It’s worth noting that Rooney was a gambler and served in World War II. He claims to have directed the long craps sequence and ad-libbed it as well. It’s a shame that what is genuinely good work from him is in service of a film that is otherwise so forgettable.

Why to watch The Bold and the Brave: It’s legitimately some of Mickey Rooney’s best work.
Why not to watch: His work is in the service of…this.

Posted by SJHoneywell at 1:04 PM