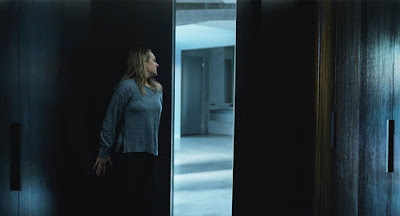 The complete tanking of The Mummy reboot with Tom Cruise more or less killed the idea of Universal’s proposed reprise of/recreation of the Dark Universe inhabited by all of their old-school monster properties. Originally to star Johnny Depp, The Invisible Man was put on the back burner when The Mummy went south. In 2019, Universal decided for more one-off films rather than a united universe of creatures, and The Invisible Man was rebooted. It’s a damn good thing, too, because this is as good a horror/thriller as you’re going to find.

I don’t say that lightly. The Invisible Man is everything you might want from a complete reboot of the basic idea and the original premise combined with putting it in the modern world. The very basics—a man who can be invisible—is here, but everything else is different. It’s a very modern take, and one that might not have been as acceptable or accepted without the world having gone through the #MeToo movement.

Cecilia (Elisabeth Moss) is the abused partner of optics engineer Adrian Griffin (Oliver Jackson-Cohen). One night, Cecilia drugs Adrian and escapes with the aid of her sister Emily (Harriet Dyer) and goes into hiding in the home of police officer James Lanier (Aldis Hodge) and his late-teen daughter Sydney (Storm Reid). A few weeks later, with Cecilia afraid to even leave the house, Emily arrives with news that Adrian has killed himself.

Cecilia meets with Adrian’s brother Tom (Michael Dorman), who tells her that Adrian’s will grants her $5 million at the rate of $100,000/month for roughly four years. She loses that money based on a number of particular instances, like being convicted of a crime or being declared mentally unstable. Slowly, Cecilia starts to try to reclaim her life, but also starts having a number of experiences that cause her to believe that Adrian is still alive. This includes the bottle of pills she used to drug Adrian reappearing in her bathroom as well as an experience in which someone or something invisible is clearly standing on a blanket in her bedroom.

This is much of the second act. Cecilia’s life starts to spiral out of control because she is convinced that Adrian (who was an expert in optics, after all) is still alive and plaguing her, but doing it well enough that no one else. Sydney gets attacked in a way that makes it look like Cecilia did it, and suddenly dismissive and rude emails are being sent from her email account to her sister, breaking off the relationship. Cecilia’s life becomes a combination of being stalked and being gaslit until it comes to a head. We get some validation for what we know she is going through when Cecilia breaks back into Adrian’s house and finds a suit that appears to render the wearer invisible.

The Invisible Man does everything right. The story is a good one, and uses a science fiction idea seems to be just a little past our current reality, a sort of ultimate ghillie suit. It’s also very accurate in the way it portrays the ideas of gaslighting and stalking. I’ve been stalked, not very seriously but seriously enough, and the feelings that The Invisible Man brings up are accurate. Cecilia is immediately sympathetic because of it, and the way that everyone reacts to her is equally understandable.

Elisabeth Moss is also a great choice for Cecilia. Moss is a talented actress and is also completely average looking. If you passed her in a grocery store, you wouldn’t look at her twice, which makes her very effective as a sort of everywoman. In fact, the least believable aspect of The Invisible Man is that Adrian, the fabulously wealthy technological genius, is so completely infatuated with her. I’m not trying to insult her—Moss is by no means unattractive, but she is not the picture of Hollywood glamor. That makes it easier to sympathize and empathize with her.

This is also a film that shows what clear direction can really do. Whannell uses his camera very well, leaving it in places for longer than it feels necessary. We’re constantly expecting that something is going to happen in the background of these scenes—we’ll see something move or a shadow pass—but this only happens later in the film, much after we expect it to. There’s not just world building here, but tension building, and it does this very well.

It’s also a very engaging story. There really isn’t an clear connection here to the original Wells story other than the premise of a man who can be invisible, but it doesn’t matter. It’s a new take on the idea, and it’s a great take, and it managed to do this for an estimated budget of $7 million. Good direction and good storytelling really does go a long way.

2020 has been a strange year for a lot of reasons. In a normal year, it wouldn’t surprise me if The Invisible Man were to be ignored come award season. Right now, I’ll be very surprised if it isn’t nominated for several awards, with Moss clearly in the running for Best Actress.

Why to watch The Invisible Man (2020): When someone wants to update a classic story, this is the kind of thing they should do.
Why not to watch: If you’ve been stalked, this will be very triggering.