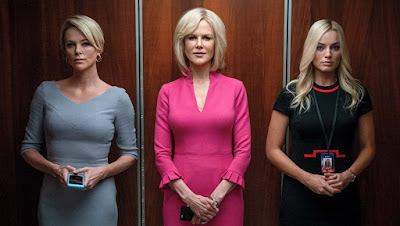 Be warned: because of the nature of this movie, this review is going to be substantially more political than is typical for me. There’s no way to discuss this without dropping into politics. I’m watching Bombshell because Charlize Theron was nominated for Best Actress and for no other reason. I don’t typically delete comments, but I will; this is a movie blog and not a political one, and I’m not going to accept comments that aren’t at the level of respectful discourse and disagreement that I have attempted to cultivate here for the last 10+ years.

Who was Bombshell made for? I genuinely don’t know who the target audience was for this movie. Like most movies based on real events, there’s some truth here, but also a great deal of fiction. In the case of Bombshell, a movie about the sexual harassment problem at FOX News, part of that fiction is one of the characters experiencing the sexual harassment. But more than that, I don’t know who this movie was supposed to attract. The #MeToo movement, those most likely to rail against the practices depicted here, are simultaneously the least likely to have any sympathy for former or current FOX hosts. The political right, evidenced by their continued support of Trump despite more than two dozen credible sexual harassment accusations brought against him, won’t care.

And let’s be clear on this—FOX paid a lot of money to the accusers of Roger Ailes (played here by John Lithgow), Bill O’Reilly (Kevin Dorff) and others rather than having these accusations go to trial. History is repeating, since recently, Sean Hannity and Tucker Carlson have been accused of sexual harassment, and former anchor Ed Henry has been accused of rape. It’s almost as if having that much money allowed them to not learn anything from this experience of just a few years ago.

And I want to be clear on this as well: the people we’re talking about here are not good or decent people. Megyn Kelly (Charlize Theron in the movie) is a reprehensible person. I’m sorry that she was sexually harassed; I don’t wish that on anyone. But this doesn’t forgive the fact that the real-world Megyn Kelly has a history of racist comments and tweets and is someone who made a living for years misleading a large percentage of the American public. Gretchen Carlson (played by Nicole Kidman) specifically dumbed down news stories to help influence people to vote against their own self-interest. You can tell me Joe Stalin had a shitty childhood. I’m sorry that he went through that, but it doesn’t make me like him more or excuse any of his crimes. Gretchen Carlson and Megyn Kelly were awful human beings before they were sexually harassed.

This brings us to Kayla Pospisil (Margot Robbie), the character not based on a specific person, but created as an amalgam. I do understand the reason she exists in the movie. We’re going to see her as the person being sexually harassed. This way, that harassment can be shown without it being specifically tied to one actual real-world person. But here again, we’re given a strange set of contradictions in a character that barely makes sense. Kayla presents herself as an evangelical, but as she starts working at FOX, she also finds herself romantically linked to Jess Carr (another amalgam character played by Kate McKinnon), with the two winding up in bed almost immediately. Look, I know there are certainly some gay evangelicals, but it’s a weird sort of denial that Kayla is more concerned that Jess is a closeted Democrat than that she herself is clearly either a lesbian or bisexual. And yes, I know that people are often a collection of contradictions and cognitive dissonance, but it’s rarely given to us in this blatant a manner.

I very much struggled with watching this movie. I disliked everyone in it and felt there was not a single person here with whom I could sympathize or wanted to sympathize.

So let’s talk about the reason I watched this: Charlize Theron. Theron is a good enough actress that she’s going to always be compelling, and while she’s good in this role, I care less about her in this role than I have about virtually any other role I have seen her in. It’s a damn shame.

I also want to mention the cast, which is as deep as you’re going to find. The trio of Theron, Kidman, and Robbie is just the beginning. McKinnon, Lithgow, Malcolm McDowell as Rupert Murdoch, plus Richard Kind, Allison Janney, Mark Duplass…it’s a deep cast. But in service of what?

Why to watch Bombshell: Hell of a cast.
Why not to watch: Who was this made for? No, seriously…who?