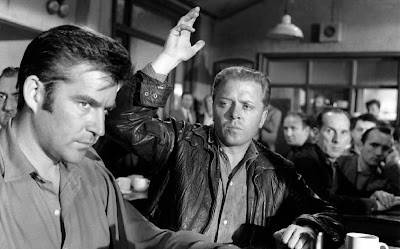 I’m not shy about my politics in general, but I tend to keep them off this blog as not being really a part of what I write about. But movies, like a great deal of art, are often political. It’s impossible to write about some of them without dipping into the political spectrum. The Angry Silence is such a film. There are plenty of films that deal with issues of labor unions and working people in conflict with their bosses. Most, like Norma Rae, North Country, or even Silkwood and Erin Brockovich are clear in siding with the people over the business. The Angry Silence is not nearly this clear, which makes it both frustrating and interesting, and for the same reason.

This is the story of a particular factory and a particular strike that doesn’t go the way that everyone wants. Tom Curtis (Richard Attenborough) works in a factory and has two children with his wife Anna (Pier Angeli) and as the film starts, we learn that they have a third one on the way. Because of this, when an unofficial strike is called at the factory, Tom decides not to participate, which is his right. The goal of the strike, which has been arranged by an outside agitator named Travers (Alfred Burke) and more or less enforced by the shop steward, Bert Connolly (Bernard Lee). The goal of the strike is to demand that the factory become a closed shop, which would give the union more power.

Despite the fact that it is within the right of everyone to choose not to participate in the strike, those who continue to work are victims of violence by a few of the toughs in the union. While Tom and his family avoid this violence, at least in part. A brick is thrown not through the Curtis family’s apartment, but through the apartment of the people who live on the floor below them. Most of the workers who had continued to work at the factory are forced to quit because of the violence. Only Tom continues to go to work, needing the money for his growing family.

When the strike ends because of a new contract at the factory forces the owners to give in on some concessions, Tom Curtis is still persona non grata. No one will talk to him, and many of the more aggressive coworkers make his life on the job far more difficult. In fact, Bert Connolly demands that he be fired because his presence has become a distraction, and he starts something like a new strike, preventing anyone from working overtime to catch up on things until Connolly is gone. Tom is interviewed by anti-union newspapers, adding more fuel to the fire, and the company fears that not firing him may cause problems with their contracts, but also balks at the idea of firing someone essentially for loyalty to them. And then, as expected, the workers take things into their own hands once again.

The Angry Silence turns on three performances. The first, and main performance is that of Richard Attenborough, who is entirely believable as a blue collar man just trying to do right by his family. The most heartbreaking moment is when the attacks on Curtis start to affect his son, and his son is naturally too young to really understand what is happening. The second central performance is that of Pier Angeli. Her accent is unexplained until later in the film when it is revealed that she is from Italy. It’s an interesting role, because she is already an outsider, and becomes even more of one because of her husband’s actions.

For me, though, the most interesting performance is that of Michael Craig, who plays Tom’s friend and coworker Joe. Craig’s work is probably the most nuanced of the three performances. All he wants is to just live his life, and he’s torn between some amount of loyalty to Tom and the fact that too much loyalty to Tom will mean he becomes subjected to the same treatment. For most of the movie, he doesn’t have the brains or the strength of character to care much about anything other than wanting his next paycheck, his next drink, and just to be left alone. By the end, though, it’s Michael Craig (who also helped write the screenplay) who will have the most impressive moment.

Where I had some initial problems was with the politics. This is a movie that takes a very different position when it comes to the division between labor and management. The Angry Silence feels very pro-management. The bad guys are all the workers who want the strike, and the guy who doesn’t want to strike is clearly the hero. And yet, at the same time, it’s also true that management isn’t depicted as anything other than venal here as well. Is it on the side of the monied or the workers? It seems to be on no one’s side but Tom Curtis’s.

The Angry Silence is good, but it’s also a movie I don’t think I need to see again.

Why to watch The Angry Silence: It’s not the labor dispute that you’re expecing.
Why not to watch: It feels very pro-capitalist and anti-labor.