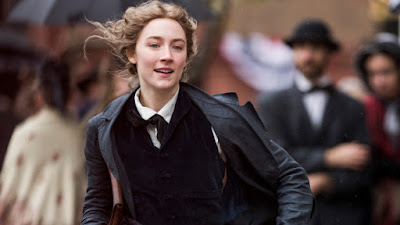 I still have a few movies to watch from last year’s Oscars, but, based on what I still have to see, I don’t think there will be a movie I am more disappointed in than Little Women. I mean, I don’t love this story. I disliked the 1930s version a great deal and just liked the one from the mid-‘90s, but I had such hopes for this one. I love Greta Gerwig’s work, and I love so many of the people in this cast, that I really wanted this to be so much more than it turned out to be.

I’m not kidding about the cast, though—there’s something about this story that attracts a great deal of serious talent. This version includes Saoirse Ronan, Florence Pugh, Laura Dern, Emma Watson, Chris Cooper, Tracy Letts, Bob Odenkirk, and Timothee Chalamet. It has Meryl Goddam Streep in a minor role. This should have been the best film of its year, especially with Greta Gerwig at the helm. And yet, here we are.

As I sit here, I’m trying to figure out exactly what it is about this story that I don’t like. I find it very twee as a place to start. The Marches, the family that we’ll be spending all of our time with, are better than you. Oh, they don’t want you to know that they’re better you, and if they thought it for a moment, they would chastise themselves for it. The Marches are artistic and saintly and charitable to a fault and irritating because of it. I try not to be cynical about such things, and yet here we are.

There are four March daughters. They are Jo (Saoirse Ronan), the writer; Meg (Emma Watson), the actress; Amy (Florence Pugh), the artist; and Beth (Eliza Scanlen), the musician. While their father (Bob Odenkirk) fights in the American Civil War, Jo writes plays for the girls to perform. Their mother, who they call Marmee (Laura Dern), does things like force them to give away their Christmas breakfast to a poor family. Soon enough, their lives become intertwined with Theodore “Laurie” Laurence (Timothee Chalamet), the nephew of the Marches very wealthy neighbor (Chris Cooper). They are also sometimes needing to attend their aunt (Meryl Streep), who is wealthy and has some minor contempt for her sibling’s family.

The movie takes place over a number of years and moves back and forth through time. Much of the film concerns, as would normally be the case for a story of this vintage, the romantic futures of the March girls, or at least for three of them. Jo and Laurie seem like the natural pairing while Meg looks for a much purer love with Laurie’s poor tutor (James Norton). But this is not specifically the story we’re going to get—Jo rejects Laurie’s awkward proposal and runs away to New York to try to write for a living. As for Beth, well, Beth more or less gets married to scarlet fever.

So, look, I desperately wanted to like this version of Little Women. I genuinely like so many members of this cast, and I will probably watch everything Greta Gerwig directs until one of us dies. And I certainly understand why this story becomes so attractive for so many people. There are moments here that are exceptional and purely honest and almost irresistible because of it. Jo, telling her mother that she is so frustrated that men of the time can have so many different ways to be fulfilled, but that women must settle for love, but that she is desperately lonely at the same time. It’s a piece of honesty in a story that seems so often to be nothing but veneer. And the little meta turn at the end of the film is actually rather interesting.

And so, I realize that this will almost certainly not be the last time I will have to watch a version of this story, because it’s going to be made again in a year or two or ten (and if you think I’m kidding, note that there was a version of this film made in both 2017 and modernized version in 2018), as sure as there’s carts to horses. And while I do like the fact that this one seems to have taken that turn at the end that puts at least some of what we see in question, I also feel like once again after watching this that I am another step closer to diabetic.

Here’s the last thing—there are direct connections between a story like this one and a story like Sense and Sensibility. So why did I love the latter and run so cold on the former? Because the relationships in Little Women feel so idealized, so perfect and so aggressively, forcibly “nice” that I have trouble with them. The Dashwood sisters feel like real, imperfect people, and so I want them to be happy. The Marches have imperfections that just make them more perfect, and my blood sugar goes up. This is masterfully made and acted; I just don’t care about any of these characters at all.

Why to watch Little Women (2019): It’s Greta Gerwig and a cast to die for.
Why not to watch: I forgot how much I dislike so many of these characters.