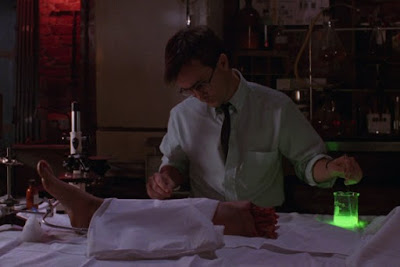 When someone is cast perfectly, it’s a thing of beauty. You know what I mean; you can’t think of anyone else in the role, like Harrison Ford as Indiana Jones, Frances McDormand as Marge Gunderson. There are few castings more appropriate than Jeffrey Combs as Herbert West. I tend to like Jeffrey Combs in whatever he’s in, but he has never been as perfect for a role as he is for Lovecraft’s obsessive doctor who is desperate to dive deeply into the world of Dr. Victor Frankenstein. He was perfect in the role in Re-Animator, and he hasn’t lost a step for the sequel, Bride of Re-Animator.

We pick up eight months after the end of the first film. Dr. Herbert West (Combs) and his roommate/assistant/partner Dr. Dan Cain (Bruce Abbott) have fled Miskatonic University for the revolutionary battlefields of Peru, where they are working as medics. Why? Because the battlefield allows them plenty of raw material for West’s experiments regarding the source of life. What we learned in the first film is that West’s glowing green reagent works…kind of. It does reanimate dead tissue, but doesn’t really reanimate it correctly. Despite the problems caused by the war, West has discovered that a local iguana might be the secret to improving his reagent. As their camp falls to the enemy, Herbert and Dan flee, returning to Miskatonic to work in the hospital and continue their work. How do they get their jobs back? Don’t worry about it.

Once back in the States, West immediately begins working on his reagent again, experimenting on various body parts from the morgue, sneaking them out past Dr. Graves (Mel Stewart). As it happens, the morgue also contains the remains from the Miskatonic Massacre, the end of the first film. Eight months later, none of those body parts have started decomposing, thanks to the serum.

We’ve got a few more plot points to add to the mix. First is Leslie Chapham (Claude Earl Jones), a police officer whose wife was killed, but was somehow still alive after the massacre. Naturally, Chapham is curious as to how is dead wife is still alive, and he suspects Dan and Herbert, the only two people to survive still sane. Second is Francesca Danelli (Fabiana Udenio), who Herbert and Dan knew in Peru. She’s clearly pursuing Dan. Third is Dr. Carl Hill (David Gale). Hill was decapitated in the first movie and had his head brought back to life. Well, he’s going to be reanimated here again and, despite being just a head, he’s going to do what he can to enact his revenge on West.

What Herbert really wants more than anything is not just to bring back a body, but to bring back, essentially, Frankenstein’s Monster. He’s been collecting body parts and stitching them together, and to get Dan to agree with his experiments by putting in the middle of his creation the heart of Dan’s girlfriend from the previous film. Thus on board, Dan helps Herbert deal with Leslie Chapham, and while Dan dawdles around with Francesca, Herbert steals bodies from the morgue, culminating with Gloria (Kathleen Kinmont), a terminal patient with whom Dan has developed a clear rapport.

Bride of Re-Animator exists so that we can experience some dumb (but consistent in the film) science and see a lot of wiggly body parts. The dumb science is that Herbert West has concluded, thanks to his experiments, that consciousness exists essentially in every cell of the body. He demonstrates this time and time again by creating monstrosities. One of the first we see is five fingers wired together with an eye on top that becomes, more or less, a crawling hand. There are a number of these monstrosities that we see throughout the film.

And there are animated guts. There’s a lot of blood. Herbert and Dan frequently end up covered in blood and potentially other fluids. And we’ve got the essential weirdness of Dr. Hill returning and being granted with something like psychic powers to control other reanimated creatures. He also gets bat wings attached behind his ears that give him the ability to fly. It’s bonkers, but in all the best ways.

Bruce Abbott is probably the protagonist on the surface of this. He’s the good-looking star, seen at least once in a billowy shirt that would look good on the cover of a romance novel. But in reality, this is Jeffrey Combs’s film. He plays West as someone clearly on the autism spectrum, but this was in a world where that spectrum either hadn’t been invented or wasn’t widely known. Herbert West is clinical, generally unemotional, and frequently baffled by the emotions and attachments of other people. He’s entirely consistent, and Combs never breaks character. I cannot imagine anyone else in this role.

Why to watch Bride of Re-Animator: Jeffrey Combs was born to play Herbert West.
Why not to watch: It not nearly as much fun as the original.