Pieced to Meet You 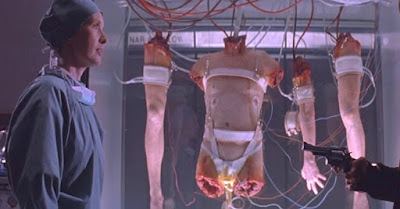 Sometimes, the premise sells the movie. Sometimes, the premise is something that combines a tried and true idea with a twist that makes it feel like it’s new in a lot of ways. And, sometimes that premise gets taken to a particular extreme and falls apart. A movie like Sorry to Bother You, brilliant as I think it is, has that problem; it just loses control in the third act. The same is absolutely true of Body Parts. This is a movie with a premise that will not be a surprise, taken in a slightly new direction that is a surprise, and that culminates with a third act that is bat shit crazy.

Bill Chrushank (Jeff Fahey, and that oddly-cobbled together last name is pronounced “CRU-shank) is a psychologist who both teaches and deals with clinical patients. One day, while driving on the highway, a car near him loses a wheel, and we get a near-accident. This turns into a spectacular real accident when Bill’s car, now stopped on the highway, gets rear-ended by a semi and he goes a-sailin’ through his windshield. While there are a few visual highlights in the film, this is very much a high point.

Bill survives being chucked through his windshield, but his right arm is so badly mangled that amputation becomes necessary. His surgeon, Dr. Agatha Webb (Lindsay Duncan) tells Bill’s wife Karen (Kim Delaney) that she can’t save his arm, but she can graft a new arm in its place with an experimental procedure. Not a plastic arm, not a prosthetic, but a real, actual human arm to replace the one that he is about to lose. Karen signs the papers and we’re off and running.

Eventually, Bill gets his new arm to work, but he starts experiencing some strange reactions to it. Sometimes (and this will not surprise you), the arm seems to have a mind of its own. Bill does a little research and finds that his arm once belonged to Charley Fletcher (John Walsh), a serial killer who was recently executed. He also discovers that Fletcher’s left arm was grafted to a painter named Remo Lacey (Brad Dourif) and his legs were grafted to a man named Mark Draper. A visit to Lacey reveals that his recent artwork all depict visions that Bill is having, and that all of these appear to be of Charley Fletcher and his victims.

Okay, so you know where this is going, right? The idea of disembodied limbs having a life of their own is not at all a new one, and it’s very clear that this is where we are going to go. Bill starts becoming more and more irritable. He plays too roughly with his son and attempts to strangle his wife at one point because of his wayward hand. He also discovers that Mark Draper is having some problems with his legs not really responding in the way he’d like all of the time. The question, then, is how is this happening? Do each of these men have a piece of the killer’s soul in their new body parts (Ooh! Title drop!)?

The set-up here is a lot of fun. In a lot of respects, this is really just a modern day version of a film like The Hands of Orlac or Mad Love, in a number of respects. The difference here is where Body Parts goes in the third act. I appreciate that something really different was tried here, but it spins so far out of control that even a willing suspension of disbelief can’t rescue it. For that reason, the rest of this review should be considered as under a spoiler tag.

What we find is that, of course, Charley Fletcher isn’t dead. Dr. Webb is very much a crazy scientist, and removed Fletcher’s head and transplanted it onto a different body. Now Fletcher wants all of his, ahem, body parts back. Naturally, he’s going to claim his legs and left arm before trying to get his right arm back from Bill Chrushank, because naturally the hero is going to be the last one attacked. When this happens, it’s another one of the really good scenes in the movie. Bill is sitting in a police car with Detective Sawchuck (the great Zakes Mokae) when Charley rolls up next to them, handcuffs himself to Bill’s (his) right arm and starts driving away. The next few minutes are more or less Charley trying to rip Bill’s arm off while Sawchuck tries to stay with him in terms of speed and direction. It’s pretty great. And, Charley’s neck brace look is absolutely a throwback to Mad Love and other films.

But here’s the thing—Charley Fletcher already has a new body. Why would he want his limbs back? Why go back through that surgery? When Bill finally shows up at the clinic where the surgery is about to be performed to restore at least some of Charley back to himself, his legs, one arm, and torso are all there wriggling away. Why? He’s got a body and, since he can drive, clearly has functioning arms and legs. There’s no need for the murder spree that would absolutely draw attention to both himself and the doctor. What would be the odds that all of the recipients of these bizarre transplants would be murdered within a day of each other?

So, while I think the idea here is a lot of fun, the last act is so ridiculous that it beggars the imagination. Too bad, because this could have been better than just the interesting idea and fun performances that it is.

Why to watch Body Parts: It does an old premise in a new and fun way.
Why not to watch: The third act is completely loco bananas.