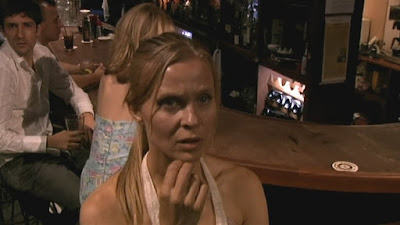 Plague and disease is always a popular theme when it comes to horror movies, and since horror movies tent to reflect the current fears of a population, expect the next few years to be filled with plague movies. Most movies of the zombie subgenre are related to plague movies in one way or another—the zombies are the result of something akin to a plague, after all. Zombie-related films like 28 Days Later (and don’t get me started if this is an actual zombie movie or not) often follow the same basic story as well—true of [REC] and its remake and plenty of other films. It’s also true of Mulberry Street.

Interestingly, there’s a lot here similar to werewolf movies as well. We start in an apartment building in New York and the announcement that it has recently been sold to someone starting to gentrify the neighborhood. The tenants of the building will be given the opportunity to stay, more than likely, but probably with massively increased rents. This is going to be the hidden message of Mulberry Street. This is a movie about gentrification the way that Night of the Living Dead was a movie about racism.

Because it’s more or less the convention, we’re going to have to have an event happening on the day that the film takes place. In this case, Casey (Kim Blair), a wounded soldier returning from a tour of Iraq, is coming home to her father, a former boxer who goes by “Clutch” (Nick Damici). We meet a few more of the people in the building as well. These include Clutch’s openly gay black friend Coco (Ron Brice); neighbor Kay (Bo Corre), who works in a nearby bar and might have a crush on Clutch; Kay’s son Otto (Javier Picayo), in his teens and grounded for faking an illness; Charlie (Larry Fleischman) and Frank (Larry Medich), two neighbors who live above Clutch; and Ross (Tim House), the building’s super. We learn a little bit about these folks and their lives. One of the things Mulberry Street does extremely well is provide us with reasons to know and like these characters.

The plague is transferred here in the traditional way—via rats. Unlike the bubonic plague, spread by the fleas carried by the rats, this plague is spread by the rats themselves. People bitten by one of the infected rats begin to mutate, becoming more and more rat-like themselves. By the time the infection is completely taken over, they are more or less wererats. They have a number of rat-like traits, and soon have rat-like appetites as well. The fact that they become more and more rat-like is used to great effect several times during the course of the film.

But what the film gets wrong is what so many films like this get wrong—the basics of the science. I can accept, within the course of a movie, the idea of zombies. They don’t make real-world sense, but the zombies in movies are at least consistent in some ways with science. They’re just undead creatures. They don’t have new or special abilities. The infected in 28 Days Later are just diseased. They physical changes they go through are (or could be) consistent with a disease, even if the onset is ridiculously fast. In so many movies, though, mutation isn’t like “I got cancer from radiation” or something like that. It’s like a completely genetic mutation—screwing up and changing someone’s DNA so that there are complete physical changes.

And that bothers me. Maybe it shouldn’t, but it does. It pulls me out of the movie when, due to a rat bite, someone’s teeth grow. At least with vampires, we have something supernatural going on, and with werewolves, it’s more than simply a disease. It’s not portrayed in that way here, though. This is just a plague, but it’s a plague that makes people grow hair and causes their teeth to grow.

I get it, though. I get why it works this way. We’re looking on some level at metaphor, at people turning into rats because life turns us into rats. The people being gentrified out of their houses are becoming less than human because that’s how the system is treating them. I get it, but the science simply doesn’t work. This isn’t how DNA works, and things like this are a very small part (very small) of why Americans in general seem to be so damn stupid when it comes to science.

I have to hand it to Mulberry Street, though. If you can overlook that basic problem—and it’s one that I can in the moment, at least part of the time, this is a good little thriller. There are some real surprises here, and the characters are genuinely real and likable. When you remember in moments that this is a horror movie and there’s no way that all of them are going to make it out alive, it’s rather sad.

This is a little more hit than miss. The plot problems are real for me, but the fact that this works as well as it does and looks as good as it does for an estimated budget of $60,000 says a great deal for what can be done on a small budget with some determined people.

Why to watch Mulberry Street: A very weird take in the style of a zombie movie.
Why not to watch: Like seemingly every movie of this type, it screws up the science.