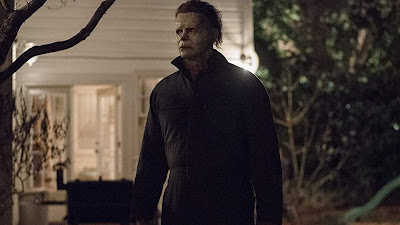 Traditionally, horror movie sequels aren’t very good. Oh, sure, there are plenty of exceptions, but in general, because the monster/killer/creature tends to end the movie dead, destroyed, or otherwise neutralized, a lot of heavy lifting needs to be done to even get a sequel started. So how do you deal with a series of films that’s been around for 40 years and had a full reboot? Well, you could what was done with Halloween from 2018. This plays itself as a direct sequel of John Carpenter’s original film. It ignores all of the other sequels and the reboot. It pays homage to the original while being very much its own film.

The quick backstory is that Michael Myers (played primarily by James Jude Courtney, a man with three first names) killed his sister when he was six. He broke out of an institution years later and massacred a number of people in the town of Haddonfield before being stopped by babysitter Laurie Strode (Jamie Lee Curtis). Halloween posits that Michael has been institutionalized for forty years (negating all of the other sequels).

Of course, we’re going to have to have Michael come back to Haddonfield for all of this to work. We’re going to get started by meeting Aaron (Jefferson Hall) and Dana (Rhian Rees), two true-crime bloggers looking to tell the story of Michael and his murders. They…visit…him in his institution as a way to start telling the story. They also meet Dr. Ranbir Sartain (Haluk Bilginer), the psychiatrist studying Michael. As it happens, they also have the mask he wore somehow.

We’re going to spend some time with Laurie Strode (still played by Jamie Lee Curtis). We discover that the years haven’t been kind to her mental status—she’s kind of gone pure Sarah Connor from the Terminator series. Laurie has two failed marriages and an estranged daughter who was removed from her care when she was declared an unfit mother. Laurie has lived her entire life assuming that Michael would eventually come back. She’s turned herself into an expert with guns and survival skills.

So, of course, when Michael and some other asylum inmates are being transferred, the bus crashes. Michael escapes and immediately starts in on a killing spree. The rest of the film concerns Michael killing pretty much everyone he comes across and Laurie trying to convince her daughter Karen (Judy Greer) and her granddaughter Allyson (Andi Matichak) that Michael is a real threat. We also spend some time with Officer Hawkins (Will Patton), who, in a break from the continuity of the first film (as far as I can remember), was a part of the capture of Michael after his murder spree.

Halloween is pretty vicious. One of the tropes of many a slasher film is that the killer tends to kill people who in some way deserve it—they break the slasher movie rules by having sex or drinking or committing some other sin. That’s not the case here—one of Michael’s first victims is a young child. It would be easy to call this nihilistic, and I was, in fact, tempted to do so when I started writing this. It’s more than that, though, and it’s what makes this sequel truly successful.

The classic ‘80s slasher movie monsters—Freddy Krueger, Jason, Chucky, and to a large extent Michael Myers (who is frequently referred to as “The Shape” as he was in the original movie) had an air of the supernatural about them. You couldn’t kill them because they couldn’t really be killed. That’s gone here. Michael appears to be difficult to kill, certainly, but not specifically unkillable. That’s a step in the right direction, because in a lot of ways it makes him more terrifying.

What Michael Myers is here is a killing machine. He is brutal and implacable, a force of nature. He kills because he kills, not because of sex or power or anything else. He just kills. He’s fast, strong, and tough, and wants nothing more than to kill. He’s not fancy. There are no quips or one-liners and he doesn’t do anything extraordinary like ripping people’s heads off. He just stabs them or strangles them or breaks their neck and then he moves on. And Halloween finally understands that. And it lets us know that of all of the characters, only Laurie Strode has really understood it.

That’s the other thing Halloween gets right. It focuses on Laurie. Michael isn’t a character—he’s a tornado or an earthquake. He’s a natural disaster, and there’s not much to actually focus on with him. Laurie, though, is a person who has looked into the abyss and come out changed on the other side. She’s interesting.

Are there problems? There are. There are some odd continuity issues. For instance, if Michael was incarcerated at six, broke out once when he was about 23, and then broke out again 40 years later, why is the first thing he does steal a car? Where did he learn to drive? Things like this are minor issues, though. Halloween is an excellent sequel and a very good reimagining of the way this story can be told.

Why to watch Halloween (2018): This is how you do a sequel.
Why not to watch: There are a couple of plot holes that don’t quite work.