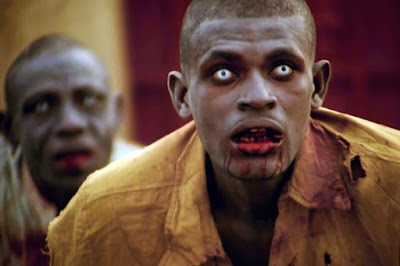 I like zombie movies a great deal. I tend to like slow zombies more than fast zombies (I’m a traditionalist in that sense). The problem with zombie movies is that they all tend to be pretty much the same. I went into The Dead (the zombie movie from 2010, not the movie of the same named based on a James Joyce story and starring Anjelica Huston) with hopes that I’d get something at least a little different. What I got was a few unique aspects and one part that was depressingly the same as most movies in the subgenre.

The Dead starts with two events. The first is an attack on a small West African village by the walking dead, who are ghouls in the traditional Romero sense. This means they are slow moving, eat the entire body, spread infection if someone isn’t devoured quickly enough, and are themselves killed by a shot to the head. We also get a scene on an airplane fleeing the area. Since someone dies on the plane and immediately turns, we get a sense of just how fast someone becomes a zombie in this world (which also indicates that man a person will end up turning rather than being wholly devoured). The plane eventually crashes.

We’re going to follow two people. The first is Brian Murphy (Rob Freeman), a lieutenant in the American military of some stripe (we’re told Air Force, but at one point he’s seen in a Navy uniform, so who knows?). Murphy is a mechanic and happens to be the only survivor that he knows of from the airplane crash at the start of the film. The second is Daniel Dembele (Prince David Oseia), a sergeant in the local military of the unnamed West African country in which this takes place; since The Dead was filmed in Burkina Faso and Ghana, those are good choices. Dembele has gone AWOL to look for his son—the village attacked at the start of the film was his village, and he has evidence that his wife was killed and that his son survived.

Eventually, these two meet up. Murphy wants to get home to his family while Dembele wants to find his son. For both, the best chance is to get to military base in the north. Along the way, they naturally have to deal with problems of zombie attacks, mechanical problems of their vehicle, and a crushing lack of food and water.

I want to talk about the things that The Dead gets wrong before I discuss the ways in which it genuinely works. The first is that the characters are completely one-dimensional. What do we know about Daniel Dembele, for instance? We know that he comes from a small village, that he’s AWOL, and that he has a necklace he wants to pass down to his son. That’s pretty much it. We know Murphy is an engineer/mechanic and that he has a wife and daughter back in the States. These characters aren’t that interesting because nothing is done to make them very real to us. They’re blank slates. For me, horror movies tend to require at least some level of wanting to care about the characters, and we’re given very little to care about in this case.

Another issue is that these two characters put themselves in situations that we know immediately are dangerous and stupid. They come to an abandoned airfield at one point, and Murphy, wanting to get into the tower, decides it’s a good idea to walk through an entirely darkened building to get to the ladder up to the tower armed with only a pistol and a flashlight. We know he’s going to get attacked. The only question is the exact moment of when.

That said, this is also one of the strengths of the film. It does play with the traditional narrative of the subgenre. Typically, a zombie film like this one will start with small groups of zombies and, by the end of the film, give us massive hordes of them. Oh, we’ll get to the massive hordes eventually, but up to that point, there is no slow build. Our two characters are instead in constant danger. There are zombies everywhere in this landscape. No place is safe for more than a couple of minutes. Every time something bad happens—the car overheats, for instance—they have only a couple of minutes at most before there are zombies around them.

This is done really well. We know at times that they are going to be attacked for certain, like the airfield mentioned above. But there is always that threat. At one point, they are desperate for water, when they come across an abandoned village with a small water pump. They test the pump. They test the water. They drink and wash their faces, and fill their canteens. And by the time they are done, there’s half a dozen zombies no more than a minute away from them. There is always a threat, and not necessarily a building threat until the end, but a constant one. The film has that constant edge because it feels like they could be attacked at any time.

I also like the small ways that The Dead plays with the idea of zombie mythology. The zombies we are presented with are silent. They do not moan, which does reduce in some small way the visceral fear of them, but also increases their threat. Because they are always silent, they are potentially always nearby. They have also been given very pale blue eyes, which are particularly disturbing.

I also love the landscape. That this takes place across such a barren savannah is a new experience, and the filmmakers were smart enough to make that landscape as much a character and as much a threat as anything else.

I enjoyed this quite a bit. I’d love to have more interesting characters are well, but as it stands, it’s one of the better zombie films of the previous decade.

Why to watch The Dead: There is a real sense of threat at all times.
Why not to watch: One-dimensional characters.

Posted by SJHoneywell at 4:12 PM