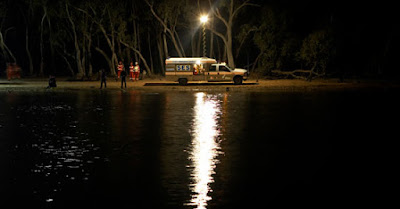 The Blair Witch Project was revolutionary in the sense that it didn’t so much invent found footage as a concept, but made it mainstream. It also in a way touched on the idea of creating a documentary-style horror movie. At least that feels like a possibility, because the film is purported to be reality. Lake Mungo takes that a step further, creating an actual “documentary” about a haunting, complete with interviews and investigative journalism.

In the creation of Lake Mungo, the single-most important decision was to make this as if it were a documentary. This is a story that simply would not work presented in any other way. Shown as a documentary about the death and evident afterlife of a young girl, Lake Mungo presents a truly compelling story, one that could be taken as fact by someone not aware of its fictional nature. As a straight narrative, this would be ridiculously boring and would feel terribly unfinished.

The story begins with the drowning death of 16-year-old Alice Palmer (Talia Zucker) while picnicking with her family. While her family, father Russell (David Pledger), mother June (Rosie Traynor) and brother Mathew (Martin Sharpe) deal with the tragedy, Mathew beings setting up his camera around the house, finding evidence that the ghost of Alice has returned to the house. The family consults with a psychic named Ray Kemeny (Steve Jodrell), who we eventually learn had some consultations with Alice herself. Alice, we learn, had dreams that she would drown and that her mother would not be able to find her.

The story twists in several places. We learn, for instance, that the sightings of Alice around the house have been faked by Mathew. His reasoning is that his mother has never really dealt with Alice’s death, and he is attempting to force them to exhume her body so that his mother can finally move on. The footage, however, also reveals that the family’s neighbor, Brett Toohey (Scott Terrill) has been breaking into Alice’s room looking for something. That something turns out to be a videotape of Alice having sex with Toohey and his wife.

Another twist comes from Alice’s former boyfriend, who reveals that she was behaving strangely during a school trip to the eponymous Lake Mungo. The family goes there to discover some additional truths and many more questions about what Alice experienced. I will not spoil this here, nor will I spoil the ending.

Probably the biggest issue with Lake Mungo is something that could be seen as a strength: it doesn’t feel like there is any real sense of closure to anything that happens. It’s not that the movie doesn’t go anywhere, but that the story doesn’t really seem to go anywhere—the entire point of the story is the haunting of Alice, but this is simply something that happens; there isn’t a greater point that is being made here. That’s a weakness because, well, it feels like there hasn’t been a point that the story was trying to tell. It could be seen as a strength, though, because that also makes it so much more believable as a real story.

This is a very smart movie, though. While it does feel like it never really resolves a great deal, it builds tension carefully and slowly. It uses all of the tricks of the documentary trade to sell the story as well. It does not rely on jump scares or shocks, but instead builds a case for a haunting that goes well beyond the initial revelation of Mathew’s fakes. Long, slowly-moving close-ups on parts of photographs or video stills that show vague shapes that may or may not resolve into being Alice…or something else…sell the entire mood that the film is trying to build.

It’s important to note that this would simply not work in any other format. This is not a film like, for instance, The Last Exorcism that clearly could work (and might work better) as a straight narrative. There’s no attempting to bowl over the audience with demonic possessions or shaky-cam footage. There’s just the methodical building of a case for a supernatural encounter that, if you weren’t aware of its fictional nature, would be entirely believable.

I enjoyed this a great deal. I’m happy I got a chance to see it.

Why to watch Lake Mungo: The choice to make this in a documentary style sells the entire movie.
Why not to watch: It feels like it doesn’t really go anywhere.