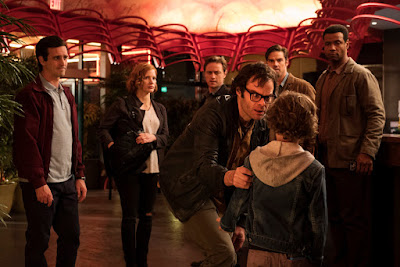 I liked the first part of It less than a lot of people, but I did like it well enough. I didn’t like the fact that it deviated so much from the source material, and I still say that the best way to handle a book like this one is a 10-part miniseries. Even that might not be enough; two 10-part mini-series might be necessary, but it would be worth it to tell the entire story. I don’t want this to go on a rant, but I can feel the rant coming. I know that there need to be some changes and omissions when going from book to screen, but man, there are a lot of changes here in It Chapter Two that didn’t need to happen.

So, since the rant is absolutely going to make its way out no matter how much I try to resist it, I’m just going to go ahead and post a spoiler warning now. The rest of this post is, for the most part, going to be a discussion of the useless and worthless changes between the book and the movie. This means that there are going to be a lot spoilers for It Chapter Two, but there are also going to be a lot of spoilers for Stephen King’s original novel. Everything from this point forward is, more or less a spoiler for the film or the book.

It Chapter Two concerns the adult versions of the kids from the first movie. We start with a rather disturbing homophobic attack as the movie starts. It’s worth noting that this is in the book—in fact, it’s the inciting incident for the book’s “present”—but it seems cruel and out of place here. This is one of those places that could have been easily cut with the hope of keeping something better and more important.

Anyway, our adults are Bill (James McAvoy), the stuttering kid who became a writer; Bev (Jessica Chastain), the group’s girl who went from abused daughter to abused wife/fashion designer; Ben (Jay Ryan), fat kid turned slim and studly architect; Richie (Bill Hader), smart-assed kid turned stand-up comic; Stan (Andy Bean), the group’s Jewish kid turned successful accountant; Eddie (James Ransone), the sickly and smothered kid turned risk assessor; and Mike (Isaiah Mustafa), the group’s Black kid who never left town and serves as the one who must call everyone back. This is important, because everyone but Mike has forgotten everything about that summer—the magic of battling the creature has caused all of them who left Derry (and that’s everyone but Mike) to completely block that part of their past.

And here’s the first place where the changes piss me off. In the book, all of these kids grew up to be incredibly successful in incredibly competitive fields. Again, that was a part of the magic. In the book, Eddie runs one of the most successful limo companies in New York. Richie is a Howard Stern-style shock jock. The movie lessens the characters. Sure, Bill is still a successful author, but it’s a running joke in the movie that all of his book endings suck. In the book, Bill is world-renowned. All of the characters seem lesser.

This continues with the fact that almost immediately, everyone wants to run away from Derry once they have come back. It’s Richie, for instance, who tries to leave the group multiple times. This is also a lessening of the character and the man. Sure, they were all scared in the book, but every one of them (well, except for Stan, who kills himself at the start of the book) was there to kill the creature. Having to guilt them into the battle is also lessens the characters, the battle, and everything else that is happening here.

We also get a subplot of a kid who is a fan of Richie, who then admits to Bill that he hears voices from the tub drain, and who is eventually used as bait (and killed) by Pennywise (Bill Skarsgard) to tempt Bill into attacking him alone. In the book, this is the kid with the skateboard…who survives. There is no scene like this in the book—it’s manipulative and serves only as a plot device to motivate the characters who—had this stuck to the source material—didn’t need additional motivation.

Now let’s talk about Bill’s wife and Bev’s husband. Both make small appearances here at the start, and we’re specifically shown that Bev’s husband is an abusive asshole. In the book, both of these characters follow their spouses to Derry. The book concludes with Bill attempting to save his wife and with Bev’s husband killed by the creature, but here? They both vanish after their one scene. At the end, Bev has evidently paired off with Ben, with no indication of how she manages to separate herself from an incredibly abusive and controlling asshole who also controls all of her business interests.

And now we need to talk for a moment about Mike. Mike, in the book, is the only unsuccessful character, since he is the one whose family didn’t leave Derry. In the movie, we learn that his parents (called “crackheads” in a newspaper article) died in a fire. In the book, Mike’s parents lived out their natural lives. Mike was more or less the record keeper, the guardian who stayed in place to bring everyone back. Here, we learn that Mike has stolen articles from the local Native tribe and defaced them to hide the fact that anyone who faces the creature dies. Essentially, Mike lies to everyone in the group to get them to fight. In the book, Mike isn’t an asshole.

There’s so much more. Ed dies in both the movie and the book. In the movie, he’s killed by being impaled in the back. In the book, he dies a hero, attacking the creature head-on. In the movie, everyone remembers everything after the end; in the book, with the creature dead, everyone forgets, including Mike—that’s how they know the monster is dead. The ritual that is used to call and kill the monster is completely changed for no clear reason. Ed is remarkably foul-mouthed, and his relationship with Richie, supposed to be cute and funny, is ugly and abusive. It’s Ed who is mostly sidelined when Henry Bowers (Teach Grant) attacks the group; in the book, Bowers nearly kills Mike and puts him in the hospital. I could go on, but I won’t.

Why to watch It Chapter Two: Well, if you saw part one...
Why not to watch: If you know the source material, this sucks.