Is This a Synonym for "Martyr"? 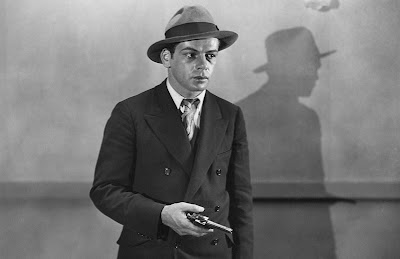 There is a sense that, when viewing an older film like this one, that I need to take into account the time in which the film was made. That’s always a good idea. As a film fan, it’s sometimes difficult to address older films with a more modern lens. We’ve seen that recently with the reaction against a film like Gone with the Wind, that has racial views that belong in the past but are tied up in understanding the story and the era of film in which it was made. The Valiant doesn’t have that kind of problem; it’s just a very early talkie and evidence that it took some time before people really figured out the medium of talking film.

What this means is that The Valiant is filled with the sort of acting that feels like it belongs on a stage, perhaps fitting for a film from 1929 that was adapted from a one-act play. We’ve got some very wooden line readings and some very ham-handed melodrama to deal with here. But at the same time, we also have the film debut of Paul Muni, who proved to be not just one of the first chameleons in talkie pictures, but one of the greatest forgotten actors of the modern age. Muni’s career included one Oscar win over five nominations that spanned 30 years—as his debut, this was clearly his first nomination; has last came for The Last Angry Man in 1959.

I went into The Valiant expecting pretty much what I got. I knew this would be syrupy, because of course it would be—it’s a late ‘20s drama. I knew that we’d get wooden performances, and we certainly do. This is particularly true of Marguerite Churchill and especially Johnny Mack Brown. But I also figured we’d get something worth seeing from Paul Muni, who was always worth seeing on camera. And, bluntly, this is exactly what I got.

The Valiant runs about 61 minutes, so we’re going to spin right into the story. We open with a gunshot and a man (Muni) walking out of an apartment. After some confusion, the man walks to a nearby police precinct and turns himself in for murder. Beyond saying that the man deserved to die he doesn’t say why he committed the crime. He also gives his name as James Dyke, getting the last name obviously from a nearby calendar on the wall. He refuses any additional information. “Dyke” is soon sentenced to death for his crime.

And here’s how you know you’re going to be hip-deep in melodrama. Meanwhile, in small-town Ohio, the infirm Mrs. Douglas (Edith Murgatroyd) discovers a picture of the mystery man in the local newspaper and decides that he looks a bit like her missing son Joe. Her daughter Mary (Marguerite Churchill) and her new fiancé Bob (Johnny Mack Brown) decide to visit the man in prison to see if he really is Joe, despite the fact that Joe left town when Mary was very young. Her hope is that he will remember her by the fact that he once taught her some Shakespeare lines.

What remains is this—is James Dyke actually Joe Douglas? I mean, you’ve got to figure that he is, right? But if he is, how will the Douglas family live with the shame of him being a murderer? And what will Dyke do with the thousands(!) of dollars he has earned by writing anti-crime articles for a newspaper? How can he make Mary and her mother proud of the missing Joe without revealing his identity and ruining their lives? And, most importantly, can he do this in a way that reveals everything to the audience (reach for those hankies, everybody!) and not reveal it to Mary?

The Valiant doesn’t have a lot of surprises in it. The acting is mostly wooden and even Muni has some moments of stiffness. But this is Muni’s picture through and through. He’s the best part of it by a long shot, and seeing this, it’s not a surprise that he became quite a star over the next decade. He is the singular reason to see this.

It’s worth noting, though, that Marguerite Churchill had a decent career as well, and that this was her debut. Even the wooden Johnny Mack Brown eventually found his calling in a staggering number of westerns. So in that respect, The Valiant is an interesting piece of Hollywood history. In truth, there’s no real reason to seek this out unless you are obsessive (points to self) or a huge fan of Paul Muni. Truthfully, you should be a huge fan of Paul Muni, so maybe that is reason enough.

Why to watch The Valiant: Paul Muni’s screen debut.
Why not to watch: You can almost literally smell the melodrama.