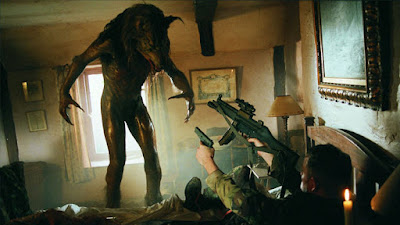 There’s something particularly camp about werewolf movies, but there’s also something about them that is undeniably cool. Of all of the classic monsters, werewolves are a unique combination of feral ferocity and cunning. They often have the same pitiable quality as Frankenstein’s Monster but also have the relentless brutality and hunger of any pack of zombies. There are some genuinely great werewolf movies. What makes Dog Soldiers a member of that club is that it does something entirely different with the genre. We’re not going to have men conflicted about what they are becoming, but absolute combat between men and lycanthropes.

We have two initial scenes that are going to be meaningful. In one, we are introduced to the werewolves (kind of) with a couple of campers being viciously chomped. We’re also introduced to Cooper (Kevin McKidd), who is trying to join a special forces unit headed by Captain Richard Ryan (Liam Cunningham). He has done remarkably well, but fails out when he refuses to shoot a dog in cold blood, and is returned to his military unit.

A month later, Cooper and his squad, led by Sergeant Wells (Sean Pertwee) are sent into the Scottish highlands on a training exercise. They spend a night outside, and the next morning find their opponents, whose base camp has been ravaged. The only survivor of the other team is Captain Ryan, who is not particularly happy to see Cooper. Ryan is ranting about being attacked, and he’s not making a great deal of sense. Too soon, they are under attack from an unseen assailant. The attack results in Sergeant Wells being severely injured and one member of the platoon (named Bruce Campbell and played by Thomas Lockyer) is killed when he is impaled on a tree branch.

The platoon and Ryan are rescued by Megan (Emma Cleasby), a zoologist who lives on her own in the middle of the highlands. They retreat to her house where they begin to make a stand against what they slowly begin to realize are actual werewolves. This means exactly what you expect—boarding up windows and doors, figuring out how things might happen when they are attacked, and doing what they can to figure potential ways out.

Dog Soldiers isn’t really long on plot. There are a couple of surprises to play out at the end that really aren’t surprises. I don’t want to deny you the pleasure of figuring these out on your own should you decide to watch the movie yourself. I’ll put them under a spoiler tag.

The first is that the training exercise was never really a training exercise. Ryan’s special forces unit knew that there was a werewolf in the area, but expected there to be just one. Because Cooper had failed out of joining Ryan’s unit, his platoon gets picked not to face off against Ryan’s team, but to be unwitting bait.

The second “surprise” is actually a series of “shocks” that are easy to spot. The first is that Ryan survived the initial attack on his men but was wounded by a werewolf, which means he’s going to change into a werewolf before we’re over. That’s not really a surprise. It’s also not a surprise when the same thing starts to happen to Wells, since he was wounded by a werewolf but not killed outright as well. The one that is supposed to really shock us, though is when Megan turns into a werewolf. It’s this that presents the major problem with the film.

See, up to this point, Megan has been actively helping the soldiers. She’s been bandaging them up, attacking the werewolves, and doing everything she can to protect the men in her home. Why do this if she’s going to just let the werewolves in at the end anyway? It’s a massive hole in the plot, and it seems to be there simply to make the movie longer. If she doesn’t help the troops and immediately turns, we lose about 50 minutes or so of running time. It’s a genuine weakness in the writing.

There are some tremendously good scenes in Dog Soldiers, and the fight sequences are tremendously fun. I like the cast as well. I’m a fan of Sean Pertwee and tend to like him in general even when the movie in question isn’t very good. The unsung hero of Dog Soldiers is Private “Spoon” Witherspoon (Darren Morfitt), who is clearly having the most fun of anyone in the film. Spoon has the best fights against the werewolves, and I would love for him to have gotten his own movie.

Dog Soldiers has problems in its plot, but makes up for it with constant, solid, and excellent action. It’s absolutely not to be missed.

Why to watch Dog Soldiers: It’s a reminder that werewolf movies really are cool.
Why not to watch: The big reveal doesn’t make any sense.

Posted by SJHoneywell at 6:02 PM