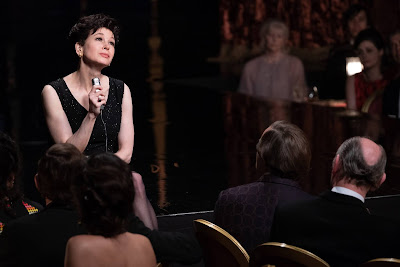 If you go back far enough in this blog, you’ll find instances of me wondering at the hype about particular actors. Believe it or not, when I started 11 years ago, I wasn’t sure why there was so much fuss about Bette Davis. I didn’t understand the appeal of Montgomery Clift. I’ve absolutely converted on both of them. Sure, there are those who I still dislike—Jennifer Jones comes to mind—but in many cases, I’ve come around on actors I didn’t initially think much of. I say this because I have been vocal about not being a fan of Renee Zellweger, and now I’ve seen Judy, and I was wrong.

I mean that sincerely. Zellweger has been good in other roles, of course, but here, she is nearly perfect. Oh, she doesn’t come close to duplicating Judy Garland’s voice, of course, but who could? Zellweger is the first, last, best, and perhaps only reason to see Judy, but she’s absolutely enough.

When a movie gets nominated for an acting award but not for Best Picture, especially in this age of expanded nominations, I always wonder why it’s the case. I don’t wonder when it comes to Judy. The truth is that Zellweger is leaps and bounds above the rest of the cast, the plot, and just about everything else. It’s not, honestly, unlike Judy Garland herself starring in a movie that was beneath her talent.

This is the story of Judy Garland, except that it really isn’t. It’s the story of Judy Garland’s last year or so, with a few flashbacks to her as a child (where she is played by Darci Shaw). It makes a certain amount of sense that this is where the film would focus in large part, but it turns out that aside from those couple of flashbacks, it’s where the film is going to spend all the rest of its time.

We start with Judy (Zellweger) being paid less than she expects for a show she performs with her children, Lorna (Bella Ramsey) and Joey Luft (Lewin Lloyd) only to be turned away from the hotel they live in for being desperately in arrears. Judy returns to her ex-husband Sid Luft (Rufus Sewell) and leaves the kids there before heading off to a party hosted by her first child, Liza Minnelli (Gemma-Leah Devereux)> It is here she meets Mickey Deans (Finn Wittrock), who will eventually become her fifth husband. Shortly thereafter, Judy meets an agent who tells her that while her star has cooled in the States, London is open to her. She heads off to London to star in a show, desperate for money while simultaneously being depressed at leaving her children behind.

What we learn between the flashbacks and returns to the film’s present, we learn a few things about Judy. We learn that her childhood, for all of the fame and movies, was terrible. She was fed amphetamines to prevent her from eating and thus gaining weight. Every experience she had was manufactured, fake, and done to create the illusion of a perfect life for her fans. In the present, drug addiction, alcohol, suicide attempts, and more have taken their toll. Judy is temperamental and flighty, difficult to work with, and absolutely her own worst enemy.

What doesn’t make any sense to me is the changes made to the actual history of Judy Garland and her life. There’s no reason to change her actual story in the ways the film does. For instance, and this is a bit of a spoiler, but it’s not like you thought Judy was going to survive the film, we see her wedding to Mickey Deans. We’re told at the end of the film that Judy died six months after the end of her London shows. And yet, in reality, she was only married to Mickey Deans for three months before she died. What’s the point of making those changes?

Look, I don’t want to get bent out of shape on this, but there’s a lot more that could have been told about Judy Garland’s life. There were more things that could have been flashed back to. I’m not expecting sunshine and roses in a biopic about a terribly tragic life, but seriously, we could’ve gotten more than just Judy circa 15 years old and Judy on her last legs.

Judy, honestly, isn’t a great film. It’s kind of a good one. It’s well-produced and the cast is a good one, but the story it tells isn’t the most interesting story it could have told. I’m disappointed in everything about it except for Renee Zellweger.

So let’s talk about that for a second. Zellweger gives a truly game performance here, inhabiting the role as much as she can. Her performance does have some affectation, but it almost has to, considering the role that she is playing. At one point in the movie, Judy says, “I’m only Judy Garland for an hour a night.” And while Judy wants to believe that, the reality is that she’s always Judy Garland, and only the good version of her for an hour a night. That’s the reality we get, and the reality the film needs to show us.