Alone in a Sea of Humanity 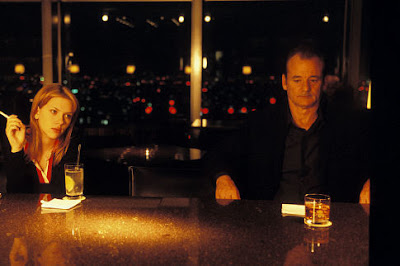 Suffering from jealousy is not one of my problems when it comes to actors on the big screen. It would be cool to be in a movie once—I’d love to be horribly killed in a film, either by zombies or as a zombie, but beyond that, I have no ill feelings toward the people on the screen. The main reason for that is that I am not an actor. The last time I acted seriously was 1988, and I gave it up for good immediately following that. I’d make a fool of myself in a movie.

The money would be nice, though. I could certainly handle the lifestyle. Or could I? Bob Harris (Bill Murray) would appear to suggest that the same things that the rest of us go through are gone through by those at the top end of the fame and money spectrum. Life is a series of boring events, being pushed and prodded by others, and drinking away the pain. Such is the tale of Lost in Translation.

Harris is an aging action movie star well past his prime who has shown up in Tokyo to film a few commercials for whiskey, and the fact that he’s being paid $2 million is the only thing that is comforting him. He feels lost, not just in Tokyo but also in his life. His marriage is stable, but boring; while he is in Tokyo away from his family, his wife constantly harangues him about carpet samples, which she sends him. He spends his evenings in the bar trying to drink away his jet lag and boredom.

Also staying in his hotel is Charlotte (Scarlett Johansson), the wife of a photographer (Giovanni Ribisi) in Tokyo for a photo shoot. He doesn’t have a lot of time for her, and she spends her day being bored and lonely and completely out of place in a city in which she understands nothing and no one understands her.

The two find each other and gravitate toward each other. This is an age difference that we have been taught to expect in movies, the much older man and the very young woman, but this is not the typical romance. Their mutual attraction, while it certainly contains something physical, remains almost platonic. They become not romantic love for each other, but a center of calm and a place of normality. In a city where the language is completely unintelligible and the customs and current fads are strange and unfathomable, they each become a place of comfort for each other. This is what is central to their relationship—not sex, but peace of mind.

Bob continues to live out the absurdities of his existence, appearing on a Japanese talk show. The show is almost unexplainable, a sort of video madhouse that could only make sense for those fluent in the language—he is as out of place here as he is everywhere else in Tokyo except for at the side of Charlotte. That night, after dealing with more carpet samples, he finds himself alone and falls into the arms of the hotel lounge singer (Catherine Lambert, who evidently was the actual lounge singer at the real hotel in Tokyo). This causes a minor rift between him and Charlotte, almost as if he was unfaithful to her instead of his wife.

There is a sweetness to this film in which the romance is made more real by the fact that it isn’t consummated. Right around the middle of the film, the two are lying on her hotel room bed fully clothed after watching La Dolce Vita, and they talk about his life and hers. Both of them are lost in their lives. He is bored with his existence, tired of constant attention and being fussed over by people he can’t understand and doesn’t want to understand. He’s adrift. She hasn’t discovered yet what she wants and has lost any will to do anything. It’s a touching scene with real intimacy despite the fact that they barely touch. Their physical contact is limited to his patting her feet near the end of the scene, but it is such a comforting and natural gesture that it resonates with a real affection.

There is an opposite to Bob in the film; this is Kelly (Anna Faris) who is in Tokyo promoting her new film. Kelly is everything that Bob and Charlotte are not. She is vain, stupid, arrogant, and unable to see her own ridiculousness and idiocy. There is no indication that Bob was anything like this at the start of his career, but I like to think that he was. Kelly is too unaware to realize that she’s nothing more than a pretty face—she thinks that people love her because she is special and talented. Bob, world-weary, has grown up enough to realize his own irrelevance while Charlotte appears convinced that she never had any relevance in the first place.

Typically with a romance—and this is a romance despite the almost complete absence of sex and the total absence of it between our two main characters—the desire of the audience is to have the couple end up together. I don’t think that’s ever on the table here. I don’t want these two to run off together, and really, I don’t think either of them wants it. They do, of course, the same way everyone thinks “if only” at certain times in their lives, but there is no real danger that each will abandon his or her spouse and stay in Tokyo. Their parting is inevitable. And yet even though that parting is tender, sweet, and sad, there is a sense of joy in it as well—if nothing else, they’ve found someone who can always be a friend when a friend is needed.

This is a pretty film. Coppola’s idea to not subtitle the Japanese is the right one—it places us in the audience in the same position as the characters, who smile and nod like many people do when confronted with a language they cannot possibly fathom.

While all of the roles are well acted, this is Bill Murray’s movie. It shows exactly where he has come in terms of presenting a character on the screen. Bob is a real person. He makes jokes that only he understands and finds funny. There is a part of him that appears to revel in the bizarre circumstances he finds himself in. He plays this role with complete resignation of his life being what it is and nothing more or different that Charlotte becomes something he needs to attain. He’s finally found something worth striving for, and there’s a real sense of ache in him, of utter confusion and frustration and bewilderment, that the scenes with her are real treasures.

This is a spectacular film, and I’m happy I watched it, and happier now that I own a copy and can watch it again whenever I want. It feels like reality, like a few days sliced from someone’s life. I can give it no higher compliment.

Why to watch Lost in Translation: Proof that Bill Murray has grown up. His comedy is tinged with tragedy.
Why not to watch: Ennui, pain, and desperate loneliness
Posted by SJHoneywell at 1:41 PM