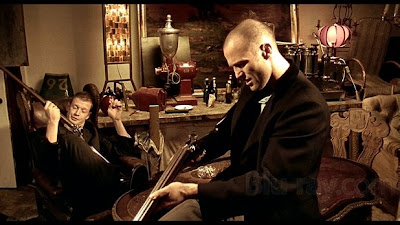 So here I am, stuck in a motel for the night with nothing to do. I considered watching The Shining but decided that maybe it wasn’t the best idea to watch a film where a guy goes crazy while snowed in at a hotel while I am spending a night at a motel because of the snow. Too close for comfort. Instead, I’m relishing in the joy of the resurgence of the British crime comedy with Guy Ritchie’s Lock, Stock and Two Smoking Barrels.

Prior to this, my exposure to Guy Ritchie is Snatch, which a part of me thinks should be on this list. The two movies are similar in a lot of ways. Ritchie’s films, at least as concerns my experience with them, include a lot of seemingly unrelated plots coming together in one place, sudden violence a la film noir, extensive and creative use of expletives, and shady underworld characters with great names. In this case, we have Hatchet Harry (P.H. Moriarty), who is both a porn king and the man in charge of a crooked card game designed to pour additional funds into his pocket.

Wandering into this crooked game is Eddy (Nick Moran), a born card player and the sucker of the moment. Hatchet Harry’s game is accessible only to those who can ratchet up the entrance purse of 100,000 pounds. Eddy does so by being funded in part by his three friends Tom (Jason Flemyng), Soap (Dexter Fletcher, called “Soap” because he has a legitimate job and likes to avoid criminal pursuits), and Bacon (Jason Statham).

Of course, since Eddy is in a crooked card game, he loses, and he loses big. Now he and his friends owe a massive amount of money to Hatchet Harry and his associates, Barry the Baptist (Lenny McLean, and called “the Baptist” because of his penchant for drowning his victims) and Big Chris (Vinnie Jones) and have just a week to pay them back. Meanwhile, a couple of low rent thieves are sent by Barry to heist some extremely valuable antique shotguns from a down-on-his-luck Lord. We also have a collection of bombed out pot growers and a collection of thugs who like to rob drug pushers. This group is led by Dog (Frank Harper) who, like many of the characters in this film and in Guy Ritchie films in general, is crazy, focused almost exclusively on causing pain in others, and has a nasty reputation.

So how do these plots come together? The four card playing losers end up purchasing the two valuable shotguns by way of a fence and the thieves, who know no better. Now, the four buddies need to pull heists to come up with the money to save their skins, the thieves need to get the guns back to save theirs, and everyone is looking for everyone else. To get the money, they’re going to rob the thugs, who happen to live next door to Eddy, using the antique shotguns that were originally stolen at the behest of Harry the Hatchet. Eddy’s dad (Sting) gets involved because as part of the debt, Harry wants his bar. Guns and expletives fly, and ultimately, no matter who comes out on top, it’s going to be someone on the wrong side of the law.

Our four heroes line up a deal with Nick the Greek (Stephen Marcus) to unload any marijuana they get in their heist of the thieves, and Nick arranges to sell the weed to Rory Breaker (Vas Blackwood), not knowing that the growers are actually working for him, and he’ll be buying back his own product. That’s not going to go well, because in addition to being a drug lord, Rory Breaker is also a sociopath. How do we know Rory is a sociopath? Well, when Eddy goes to the card game, the other three guys hang out at a nearby pub, and are greeted on arrival by a guy running out of the pub covered in flames. After we are formally introduced to Rory, we hear the story of exactly how that guy got lit up in the first place, complete with subtitles since it’s told in British criminal rhyming slang.

Ultimately, everybody is looking for everybody else, the money and drugs change hands time and time again, the body count (and f-bomb count) rises continuously, and the fate of Eddy, Tom, Soap, and Bacon comes down to the value of the two shotguns.

Is it complicated? Of course it is. That’s part of the fun here. All of the plots tumble into each other in interesting ways, and you can bet that any time someone new shows up, he will eventually be a part of the main action, even if the connection appears to be tangential. After all, all of these characters are essentially stealing from each other, chasing each other, owe each other money, or want to kill each other. Sometimes, all of that at once.

The real difficulty, though, is following the dialogue. As an American, I can pick up on some of the stranger accents in the Americas because I’m used to hearing them now and again. In this film, many of the characters have such a thick regional British patois that subtitles would have been helpful for more than just the criminal slang. (It’s worth noting that this was one of the bigger criticisms of the film, and Ritchie responded in Snatch by giving the Brad Pitt character a completely unintelligible speech pattern.)

The joy of a film like this is seeing the plot wound into a Gordian knot and then seeing it all come unraveled. Like the knot of legend, the only way to get everything untied in the end is by cutting it in half, which means a lot of guns are going to get fired and a lot of people are going to end up as bodies. And that’s part of the fun, too, because almost all of these people really deserve that fate. Lock, Stock and Two Smoking Barrels is not something I’d put in front of my kids, but there’s a particular charm to British gangland thugs, pushers, and mobsters. It’s a particular brand of cold-blooded viciousness that, as a member of the audience, makes me break into a broad grin. It’s just so damned British that I can’t help but like it.

Why to watch Lock, Stock and Two Smoking Barrels: Modern British crime comedy as good as it gets.
Why not to watch: Don’t be surprised if you resort to subtitles.
Posted by SJHoneywell at 9:07 AM