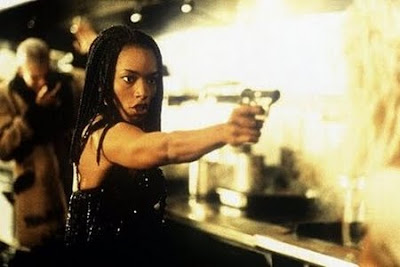 It takes guts to make near-future science fiction. If you make a science fiction film set a couple of hundred years, or even a few dozen years into the future, you have a lot more play. When you only look three or four years off, your film tends to become silly once real time catches up to the time depicted in the film. As a case in point, Strange Days depicts a 1999 that never happened, even if it was a legitimate prediction when the film was made in 1995.

The film takes place over the last two days of 1999, mistakenly believed to be the last days of the 20th century, which really ended on December 31, 2000. Anyway, a great deal is made of the impending “end of the world” because of the first digit of the year marker changing. Interesting that the actual projected calamity of Y2K hadn’t been thought of when Kathryn Bigelow made this film. Anyway.

The latest and greatest technology is SQUID. Essentially, this is a neural net placed over the scalp that plays mini discs directly into the wearer’s cerebral cortex, allowing that person to actually experience the life of the person being filmed. The technology, originally developed for the military, has gone underground and black market. The main trade is (naturally) pornography, but there is also a market for clips in which the original recorder does things like rob liquor stores. This allows the user to experience the actual adrenaline rush and thrill of committing a crime without actually risking injury or jail time. There is also a market for so called “blackjack” clips in which the recorder dies at the end, giving the person playing back the disc a small taste of the Great Beyond.

In this world of underground smut and death runs Lenny Nero (Ralph Fiennes), an ex-cop. He’s got a thing for his ex-girlfriend Faith (Juliette Lewis), who is an up-and-coming singer working for a producer named Philo Gant (Michael Wincott) as well as Gant’s main squeeze. Lenny’s best friend is another ex-cop named Max (Tom Sizemore), and he also pals around with Lornette “Mace” Mason (Angela Bassett), a private security/limousine driver. Lenny buys clips from other people, duplicates them, and packages them off to his clients who want to experience a little bit of someone else’s life. Lenny makes a good deal of money at this in part because of his discretion, and in part because like any illegal drug, the market always pays big.

We learn two important things at the start of the film. The first is that a former friend of Lenny’s (and Faith’s former best friend), a prostitute named Iris (Brigitte Bako) is in trouble. She is being pursued by someone who evidently wants to kill her. We also discover that a rap artist named Jeriko One (Glenn Plummer) has been murdered gangland-execution style. It’s likely that the two are related.

While all of this is happening, Lenny starts getting mysterious clips left for him by an unknown party. These clips depict a killer breaking into apartments and hotel rooms and raping and killing the women inside. More to the point, before killing his victims, the killer is wiring them with SQUID and feeding them back his signal, essentially forcing them to not only watch themselves die, but also to experience his own excitement at the crime. Evidently, James Cameron (who wrote the screenplay) spent some time watching Peeping Tom while penning this script. The parallel is impossible to miss.

Now, Lenny has to figure out who killed Iris and why, who killed Jeriko One and why, and what all of this has to do with him, with Faith, with Philo Gant, and with the “end of the century” coming. And then there’s the problem of the two cops (Vincent D’Onofrio and William Fichtner) who seem to want to kill him.

In essence, Strange Days is noir-punk. It follows all of the conventions of a good film noir, but sets it a few years into the future, into that cyberpunk world where technology is more important than humanity, and being wired is more important than being alive. Because 1999 and 2000 turned out to be very different than depicted here, it’s important to try to view this film from a pre-Y2K perspective. It can be difficult to judge this film based on the reality of 15 years after the film being made and 10 years after the “events” depicted in the film.

Viewed from that perspective, ignoring the Y2K aspects of the story (which are ultimately sort of a red herring anyway—important for a couple of lines of dialogue and very little else), looking at this film as simply “five years in the future,” it does a remarkable job of creating a mood and a believable atmosphere. This is a dark vision, but it is a very real vision and a possible one. This is not high science fiction in the sense of hyperspace, laser guns, and travelling to distant stars. This is gritty technology: real, human, and ripe for causing a great deal of pain and suffering.

The characters throughout are motivated by their emotions, and because of this, act in believable ways. Frequently they act in ways that are incredibly stupid, but are believable because of this. Vincent D’Onofrio hasn’t been this creepy and disturbing since Full Metal Jacket.

I like this movie. I liked it the first time I saw it, and I considered it a guilty pleasure, as I often do with science fiction. This may be because I was indoctrinated by my father to think that science fiction was something to be embarrassed about liking. Dad was never a big fan of anything involving aliens, lasers, spaceships, or future technology. So there’s a part of me that’s a touch ashamed of digging this kind of material. I should get over that, because Strange Days is really good and worth watching.

Why to watch Strange Days: Advances noir into the current century.
Why not to watch: “The last day of the last year” already happened very differently.
Posted by SJHoneywell at 9:47 PM