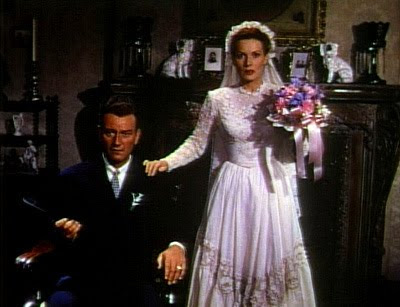 Yesterday was Christmas, and in addition to a few new ties, some kitchen gadgets, and some gift cards, I got a portable DVD player. This means that when I drive my daughter to dance class, I can watch a film while I’m waiting for class to end, and can bring the light and streamlined player instead of my laptop. Bonus, bitches!

The inaugural film is John Ford’s The Quiet Man. Why that film? Because I have it checked out from the library and it needs to go back soon. Additionally, because I looked at the titles I checked out and discovered depressing, depressing, depressing...and this one. Hey’ it was Christmas when I watched, so we’re not doing depressing. We can do that later in the week, but I wasn’t going for existential drama on Christmas.

To start our film, an American named Sean Thornton (John Wayne) shows up in rural Ireland and asks the way to Innisfree. While a gaggle of locals squabble about the best way to get there, a little man named Michaleen (Barry Fitzgerald) grabs Thornton’s bags and the two head to town. Curious as to why an American would want to come to this backwater, and want to buy a house, Thornton reveals his identity—he was born here and his family moved away years ago. He’s returned to claim his family land. Michaeleen remembers him.

This land is owned by (and I’m capping all of the words in this name, because that’s how it’s said throughout the film) The Widow Sarah Tillane. Thornton arranges to buy the land from her in a bidding war with the proud and pugnacious “Red” Will Danaher (Victor McLaglen). Danaher wants the land to add to his holdings, and because it will give him a better connection to Sarah. She happens to be in his age range and wealthy beyond measure, and Will Danaher wants to go a’courting. Now Danaher is forever angry at the Yank and forbids Thornton from courting Mary Kate (Maureen O’Hara), Danaher’s sister. Since Michaleen is the matchmaker, this creates a problem and a conspiracy is created.

So now, Michaleen, Catholic priest Father Lonergan (Ward Bond, who also serves as the film’s narrator), and Protestant minister Reverend Playfair (Arthur Shields), and Playfair’s wife (Eileen Crowe) conspire to trick Danaher. They convince him that Sarah Tillane shows no interest in him because of his sister’s presence in his house. He allows Thornton to pay court, the two are married, and it would seem that all is well.

But it isn’t. He becomes aware of the trick and keeps Mary Kate’s dowry. Sean doesn’t care about the dowry, but she does—to the point of refusing
Posted by SJHoneywell at 11:01 AM