Marcel Ophuls is an angry man. He can be forgiven for this, considering the fact that his life was thrown into terrible upheaval during World War II thanks to the Nazis. It’s not the Nazis who receive the bulk of his ire and scorn, however. It certainly appears that way on a first view, but this is not what drives Ophuls to make films. In Ophuls’s world, the Nazis represent the second lowest level of Hell. The true lowest level is reserved for those who collaborated with the Nazis, especially in France. 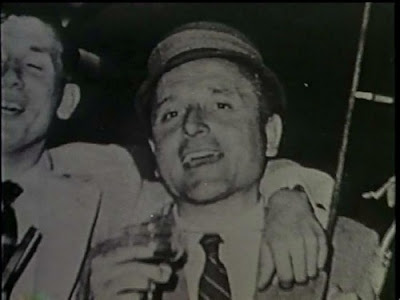 Hotel Terminus: Klaus Barbie sa Vie et Son Temps (Hotel Terminus: The Life and Times of Klaus Barbie, hereafter referred to as simply Hotel Terminus) is a nearly 270-minute documentary that, based on the title, is about the man who headed the Gestapo in Lyon during the war and was responsible for the deporting of thousands of French Jews and undesirables to concentration camps and near-certain death. Certainly, a great deal of this film is about Barbie, his time in Lyon, his flight to South America, and his eventual extradition from Bolivia and trial back in France.

In essence, Ophuls is using the story of Barbie to get at a much larger problem, one that was essentially covered up for a good forty years between the flight of Barbie to South America and his extradition 40 years later. What Ophuls uncovers is not just the how of Barbie’s escape, but the who. Through a variety of interviews, Ophuls makes a genuine connection between Barbie’s escape from justice and a variety of governments and government agencies—including American ones—who aided and abetted him because of his usefulness.

Complicity with various Nazi war criminals was something of an open secret. The American space race was aided in no small part by Werner von Braun, who also invented the V-2 rockets that were sent to pulverize London near the end of the war. But there is a feeling that complicity with Klaus Barbie is somehow different. We pin medals on the uniforms of bomber pilots, after all, while based on a great deal of testimony in this film, Barbie was a man who enjoyed torturing people for the sake of torturing them. The nickname “The Butcher of Lyon” doesn’t happen by accident.

Hotel Terminus is slow to develop, which makes sense in a film of this length. Ophuls breaks the film down into discreet sections: Barbie’s time in Lyon, his flight to South America, his time in Bolivia, his connections, etc. In each part of the film, Barbie becomes less the focus of the narrative and more the example of a larger pattern of behavior by various governments to protect men who deserved a far worse fate because of information they possessed or knowledge they had. One long section of the film deals with Barbie’s alias. It was again an open secret that he was who he was, but because of his knowledge and position of influence with various governments in South America, no one could touch him. He was, in essence, a man too valuable to get rid of.

And this is what fuels the anger of Marcel Ophuls. Throughout the film, in various interviews with those who knew Klaus Barbie and helped him, Ophuls goes on the offensive, seeking to determine not what people did, but why they would consent to help a man with such a bloody and terrible reputation and past. By the end of the film, with Barbie’s sentencing almost meaningless, the answer has still not arrived.

What comes through again and again, even more than the complicity of various people and organizations with Barbie’s crimes is the complete lack of acknowledgment that there is any value in pursuing justice against the man. By the time his life sentence in France was carried out, he had become an old man recovering from a stroke and doomed to die in a few years. “So what?” is the repeated essence of many of these conversations. The past is the past, and it helps no one to put a decrepit man behind bars for crimes that happened a generation and a half ago.

Or does it? Ophuls wants justice, and I think most people who watch the film will want more justice that was given here. A few years in a cell at the end of his life is a small payment for the massive evil that the man worked and the thousands of lives he either ended or destroyed.

Essentially, Hotel Terminus is Marcel Ophuls’s way of reminding us that for some crimes, perhaps there is no true justice, but that striving for that justice is always worthwhile and important. Unless we remember what has happened and do what we can to make those responsible pay for their crimes, the past is doomed to be repeated again and again—and some pasts are too horrible to contemplate returning.

This is a hard watch. I will not call the film boring, but I will say that it does require a great deal of endurance. The 267 minute running time is almost exclusively interviews of people who knew or had dealings with Klaus Barbie, and while many of these interviews are enlightening and interesting, more than four hours of them straight through can cause some mental wandering. I recommend watching this over a period of several days, but I do recommend watching it.