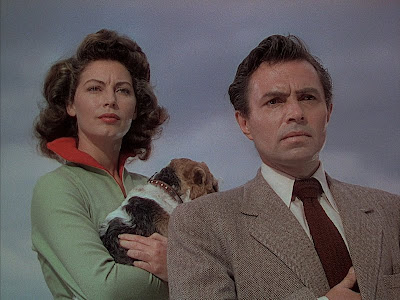 Our NetFlix subscription has been a boon in finding a lot of movies, but NetFlix doesn’t have everything. There are probably 100 or more films not in the NetFlix library that might show up eventually and might not. One of these is Albert Lewin’s Pandora and the Flying Dutchman, which has been sitting in my NetFlix queue at the bottom in the “not available” category for months. What a treat to find it at a public library!

Like many films of the day, this one starts at the end. A collection of Spanish fishermen dredge up something horrible—a pair of bodies intertwined. We don’t see them; we see only their hands clasped together in death on the beach. The story is then picked up by a professor of archaeology named Geoffrey Fielding (Harold Warrender), who relates the tale of Pandora (Ava Gardner).

Pandora is a beautiful but selfish and self-centered woman. Every man who knows her, even in some respects Fielding, is infatuated with her, and she uses this knowledge to force men to act in the way she wants. She’s a tease, and in our opening scene with her, she teases a man named Reggie (Marius Goring) into suicide. Since he can’t have her, he poisons himself. She also teases Stephen (Nigel Patrick), the object of Janet’s affection. Stephen is a driver, and has spent two years building a car to break the land speed record. Pandora promises to marry him if he pushes his car into the sea. He does. She tells him since it is the ninth day of the third month, she will marry him on the third day of the ninth month.

Unbeknownst to Pandora is the presence of Hendrick van der Zee (James Mason), who has shown up in the small Spanish port. Pandora swims out to his ship and meets him, surprised that he is alone. He is in the middle of painting a portrait, quite coincidentally of the Greek myth Pandora, and the face on the portrait is Pandora’s. She becomes quite interested in him as a result, and he joins her group of friends and suitors on the Spanish coast.

What we (and Fielding) learn is that van der Zee is truly the Flying Dutchman of legend. He killed his wife, convinced that she had been unfaithful, and declares a curse on himself at his trial. He escapes his jail cell and returns to his ship only to discover that the curse has come true. He cannot die. He is forced to roam the Earth alone and eternally. Every seven years, he can come ashore for six months to find a woman and convince her to love him so much that she will give up her life for him.

Into this mix, we add a matador named Juan Montalvo (Mario Cabre), who is also infatuated with Pandora. He schemes against the other men (especially van der Zee), Stephen rescues his car from the ocean and attempts to set the land speed record a few days before the wedding, and everything comes to a head, leading back to the beginning. Honestly, it’s impossible to spoil the ending of this movie. If you’ve seen the first five minutes, you know how it’s going to end.

The question is the movie’s place on the list. Does it belong? I’m not really sure. It’s a nice story and an interesting one because of the supernatural elements in the story. I’ll be blunt here: I like James Mason a lot. I think he was almost always great and it’s impossible not to watch him when he’s on the screen. Ava Gardner, though, does nothing for me. I’m not sure why.

While the film is about the romance, it’s also about the growth of the Pandora character. She’s nasty for quite a bit of the film. It’s evident that van der Zee is enamored with her because she is the very image of his murdered wife. She’s mean, though, through a good part of the movie. This is entirely intentional, of course, because if there is no real growth in the character, there’s no real purpose behind the film. As the film goes on, she learns that her own desire to hurt others comes from her own unhappiness, and by the end of the film, rather than goading Montalvo, she seeks only to calm him and send him on his way.

The supernatural elements seem to be an attempt to add weight to the film, but I don’t know if there’s enough there. It’s a sweet movie, and a tearjerker of sorts, but all in all, it doesn’t belong with the greatest of the great.

Why to watch Pandora and the Flying Dutchman: Because James Mason kicks ass.
Why not to watch: Too fluffy to be anything more than a curiousity.
Posted by SJHoneywell at 8:44 PM