Living Through Another Cuba 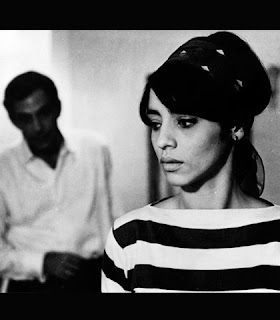 Aside from Ricky Ricardo, Fidel Castro, cigars, and GitMo, what can you tell me about Cuba? I admit to a lack of knowledge about the little communist stronghold to America’s southeast, so I was curious to see the only Cuban entry (I think) in “The Book.” Tomas Gutierrez Alea’s Memorias de Subdesarrollo (Memories of Underdevelopment) is in part archive of the Cuban revolution and in part the story of a man trying to find his way in a world that has suddenly and irrevocably changed around him.

Our guide through this new Cuba (the film is set between the Bay of Pigs invasion and the Cuban Missile Crisis) as well as the focus of the film, the subject of and source of the meditations, is Sergio (Sergio Corrieri), a middle-aged failed writer and former member of the bourgeoisie class. While he contemplates the various changes that have taken place in Cuba, he also contemplates the three main relationships he has had with women in his life: Hanna, his first great love; Laura, his wife who has left for Miami; and Elena (Daisy Grenados), a young and fairly dim but pretty girl who accuses him of rape.

Of these three women, it is Elena who we spend the most time with. She is attractive, but not very bright or educated. While touring Hemingway’s Cuban home, for instance, she refers to him as “Mr. Way.” Sergio is attracted to her for a number of reasons, not the least of which is her natural beauty. Beyond that, though, he comments that he finds women more attractive when they are made that way by things—natural beauty itself isn’t that appealing, but women who have been made beautiful by nice clothing, cosmetics, and the like are appealing to him. In Elena, he has a girl he can essentially turn into what he wants. He does this at first by promising her his wife’s abandoned clothing.

We discover late in the film that Elena is only 16, and when Sergio doesn’t marry her, her family accuses him of taking advantage of her because of her mental deficiency. This is, aside from her apparent native dimness, the first we’ve seen of anything like forced sex on the girl. In fact, she seems like a pretty willing participant, and this is no doubt significant. A metaphor for the Cuban state, perhaps? Probably. It’s worth noting that the more “Cuban” sounding the women’s names become, the more they attempt to hurt Sergio. Hanna, who is German, is still on a pedestal in his mind, Laura is just sort of bitchy, and Elena is actively and aggressively seeking to do him harm.

The narrative here is really nothing special. A man’s wife leaves him for a better life in the United States while he stays in Cuba. After she leaves, he spends time with a younger woman who eventually accuses him of taking advantage of her. He also remembers his first love with a woman who eventually moved to New York while he stayed behind to run his father’s furniture store. That’s really it.

What is interesting is the style in which the film is told. Sergio’s narrative is not told in any sort of specific order. Instead, the film attempts to mimic the twisting and convoluted pathways of memory, jumping in time from past to present to past as one thing reminds Sergio of something else. We follow his train of thought as it spirals in on itself, looking at Elena and remembering Hanna, or remembering a conversation while having another in the present.

Slowly, the audience begins to realize that Sergio is, as he claims, terribly old for his 38 years. He’s lived a complete life, and now in the new Cuban state, there isn’t anything left for him, and also no reason for him to leave and start again somewhere else. Even being cleared of the charges leveled by Elena’s family give him nothing more than a brief respite from what he assumes will be the crushing weight of his own existence. Acquittal, in many ways, is just as bad as conviction. Either way, Sergio is still imprisoned.

Alea uses archival footage well, and the narrative, while jumpy, is not that hard to track. I think perhaps I’m too much amateur and not enough auteur to really grok the thing’s totality, though. I didn’t find it revelatory or revolutionary, and evidently, that’s a failing on my part.

Why to watch Memorias de Subdesarrollo: The heart and soul of Cuban cinema.
Why not to watch: Disjointed narrative
Posted by SJHoneywell at 1:04 PM